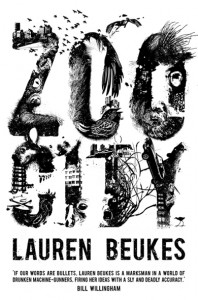 I’ve often joked about how much I need clones. But alas, like time machines and teleportation devices, photocopy-style human cloning just isn’t there yet (unless you believe the dubious claims of the Raelian cult). Luckily I’ve got something even better than an army of Laurenz: a collection of brilliant brains.

It would be neat if they were brains in jars, directly hooked up to word processors to churn out pages while I sleep, but I suspect that probably takes a lot of electricity and probably a mad scientist to maintain them – and mad scientists and their inevitable slobbering loathsome assistants cost a lot to feed.

So, nope. I’m talking the kind of brains that walk around in people casings – the kind that feed themselves because they have jobs and credit cards. And when it came to writing some of the additional materials for Zoo City, I was very happy to be able to raid those brains for their genius.

When I was writing Zoo City I conspired to get away from the dreaded info-dump by including found objects that cunningly extrapolated on the world I’d created in which criminals are burdened with parasitic magical animals in unexpected ways. (See ‘Worldbuilding Through Found Objects’)

To explain how the planet reacted to the first outbreaks of the “zoo plague”, I wrote a chapter in the style of an IMDB page entry on a documentary on exactly that subject, complete with p0rnbots posting spammy links, for example.

When it came to writing a music magazine interview with my antagonist, the dodgy afropop producer, Odi Huron, I approached a seasoned music journo friend, Evan Milton, if I could read over some of his profiles on real South African music producers like Chicco Twala or Gabi le Roux, for inspiration. He suggested something even better.

I’m used to collaborating. For the last five years, I’ve worked as head script writer at an animation studio. My team and I don’t just bounce around ideas, we send each other our scripts to tweak, polish and add extra jokes. And 97% of the time, it works amazingly well. The other 3% of the time, you smack your colleague up side the head for daring to change your line of sheer genius and revert it back, stat.

Once a script is approved, it goes to design, then storyboard, then animation and the wonder of the thing is seeing what other people do with your ideas, the way they interpret it, the way they make it their own. It’s a wonderful chemistry of collaboration.

Inspired by Evan’s suggestion, I approached the winners of the Moxyland short story competition (winning entries are featured in the back of Zoo City) to guest write some of the found objects chapters. I sent them all a copy of the manuscript and they discussed ideas with me and then came up with their own unique takes on my universe.

The results were amazing – and, best of all, surprising.

Sam Wilson wrote one of the most poignant chapters in the book – the prison interviews – that succinctly explains what the animalled are and what their lives are like as criminals, but also victims.

Excerpt from Caged: Animalled Behind Bars

“It’s crazy in here. I know you can’t tear a man from his animal. Ain’t right. But some of these n***rs got real wild animals, man. One guy’s got a Cougar. You can’t tell me that’s right, letting a prisoner walk around with a Cougar.

There’s an order to things, too. Don’t matter what you did, you got a bad-ass animal in here, you’re a bad-ass too. And it don’t matter how many people you killed, you got a Chipmunk or a Squirrel, you’re gonna be a bitch. Way it is.

Then there’s me. I got a Butterfly. Keep it in a matchbox. I oughta be pissed off, man, you can guess what it’s like being in here with a Butterfly. Except for the stuff it lets me do.

See, when I go to sleep every night, I wake up as someone else. For the time I’m asleep, I live the day of someone else on the other side of the world. Man, I’ve been kids in Africa and India, I was once this old Chinese woman. Mostly I’m poor, but sometimes I get lucky and I’m rich.

What I’m saying is, I can’t hate the Butterfly. Butterfly breaks me out of here every night.”

Charlie Human wrote an extract from a psychology paper that interrogates the idea of the undertow in a pitch-perfect anally academic argument.

Masks of Existence: The Demystification of Shadow-self Absorption

This paper presents a case for the demystification of counselling approaches for Aposymbiot individuals who exhibit psychic trauma associated with fear of the phenomenon known psychologically as shadow-self absorption and commonly as the ‘Undertow’.

Whilst acknowledgement must be given to religious organisations and lay therapists and their work with Aposymbiot individuals, psychologists cannot ignore the continuing religious stigmatisation of Aposymbiots within society and within the therapeutic community itself. Therapists who themselves, either tacitly or (in rare cases) overtly, subscribe to the idea of Aposymbiots as ‘animalled’ or ‘zoos’ and shadow-self absorption as ‘Hell’s Undertow’ or ‘The Black Judgement’ perpetuate this stigmatisation and very often fail to see the very real trauma that Aposymbiots experience as a result of lifelong anticipation of shadow-self absorption.

This trauma, most often experienced as an irrefutable and ever-increasing sense of oblivion, commonly manifests as an intense obsession with self-annihilation, acted out through extreme hedonism and criminal behaviour, or as a sexualised fetish with self-destruction, as in the well-documented bacchanalia of cults such as the Blood for Severance group, who engage in mass culling of their own animals to actively invoke the terror and rapture of shadow-self absorption.

And Bryan Steele wrote a transcript of a rabidly right wing talk-show host decrying the animalled as devil spawn incarnate. (Unfortunately, I ultimately wasn’t able to use it because it raised more questions than I had time to deal with, but I’m hoping that if I ever do a sequel to Zoo City, it’ll fit right in.)

“I don’t hate the zoos, caller. I pity them. And I fear what they might do to our country. Look at what zoo-friendly legislature has done elsewhere around the globe. France; the Marseilles Incident cost sixteen lives because of one bad orangutan. Brazil? The drug cartels employ more violent zoos than any other single force in the country. India’s new social allotment for the so-called holy hosts has caused more lower class poverty than the fall of the last ruling monarch. So, Lefty, if you are still listening, I want you to take one thing away from your attempt to derail the truth on my show… you are wrong about me! About Christianity! And about the future of our country!”

It was a risky experiment, but it paid off because I had brilliant, inspired co-conspirators who not only got where I was coming from, but who were able to claim a piece for themselves in ways I wouldn’t have anticipated.

If I ever do get my cloning factory set-up, I may have to clone my co-writers too, because it’s definitely something I would do again.

Lauren Beukes is a recovering journalist, TV scriptwriter, award-winning columnist and writer (aka glorified typist). She’s the author of the muti noir, Zoo City released in 2010 and the dystopian thriller Moxyland (2008) which William Gibson describes as “very, *very* good.” She lives in Cape Town with her husband and daughter.