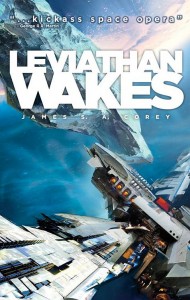 On the surface, Leviathan Wakes, volume one of The Expanse, appears like any other space opera—spaceships duke it out in the silent vacuum of space; down-on-their luck security officers spend their time policing backwater space stations; terrorist groups cause mischief in the name of freedom and equality; various factions exist within an uneasy peace, always on the edge of inter-planetary warfare.

So, Leviathan Wakes set itself apart not by its weird aliens, nor its so-cool-I-gotta-have-it technology, but rather by its lack of such genre staples. You see, instead of plumbing the depths of the universe and its trillion stars, author(s) James S.A. Corey (a pseudonym worn by Daniel Abraham and Ty Franck) decided instead to explore a future where interstellar-travel is still only a pipe-dream. Reminiscent of the long-dwindled population of Easter Island, humanity is stuck in a solar system-sized bubble and, as time ticks away, they can’t help but cannibalize everything good in their ever-failing quest to leave the solar system behind.

Many hundreds of years from now, humanity has spread out just beyond the reach of Earth, terraforming Mars and filling “The Belt” with space stations carved into hollowed-out asteroids. These three colonies, grown apart in both ideology, language and even physical stature, are at an uneasy crossroads in their history—each relies on the others, but independence, expansion and dominion (ever the human motivators) are on the minds of each. Such a setting is wonderfully refreshing and adroitly mixes both the familiar with the new and uncomfortable (squat Martians of Indian descent topped off with a Texan drawl, for instance) and forces Corey to look away from alien life as a constant source of conflict and instead search for it within the twisted politics of the various human factions. Early in the novel, one Earth-born character struggles with the racism he finds living in The Belt:

Havelock was sitting alone, with one thick hand wrapping a fluted glass. When Miller sat down beside him, Havelock turned toward him, ready to take offense, nostrils flared and eyes wide. Then the surprise registered. Then something like sullen shame.

“Miller,” he said. In the tunnels outside, he would have been shouting. Here, it was barely enough to carry as far as Miller’s chair. “What’re you doing here?”

“Nothing much to do at the hole,” Miller said. “Thought I’d come pick a fight.”

“Good night for it,” Havelock said.

It was true. Even in the bars that catered to inner planet types, the mix was rarely better than one Earther or Martian in ten. Squinting out at the crowd, Miller saw that the short, stocky men and women were nearer a third.

“EMCN?” he asked. The Earth-Mars Coalition Navy often passed through Ceres on its way to Saturn, Jupiter, and the stations of the Belt, but Miller hadn’t been paying enough attention to the relative position of the planets to know where the orbits all stood. Havelock shook his head.

“Corporate security rotating out of Eros,” he said. “Protogen, I think.” A serving girl appeared at Miller’s side, tattoos gliding over her skin, her teeth glowing in the black light. Miller took the drink she offered him, though he hadn’t ordered. Soda water.

“You know,” Miller said, leaning close enough to Havelock that even his normal conversational voice would reach the man, “it doesn’t matter how many of their asses you kick. Shaddid’s still not going to like you.” (pp. 40-41)

I’ve often been hesitant to delve into some of science fiction’s contemporary classics, such as Peter Watts’ Blindsight or China Miéville’s recently-released Embassytown, for fear of the prospective challenge presented to the reader. You’re going to have to work to read this book. Your interpretation of life or communication or physics is going to be manhandled and left battered and crying in a corner. This complexity is appealing to some, but to this reader and his simple brain… it just seems overwhelming. Often, I just want to kick back and have some fun when I read, and Leviathan Wakes fits that mold perfectly. It takes a more accessible approach to science fiction, focusing on the “fiction” over the “science,” and sits comfortably alongside the novels of John Scalzi and Tobias Buckell, two authors who write rockin’ fun science fiction that always leaves me wanting more.

For instance, in an interview included at the back of the novel, Corey, when asked how the Epstein Engine (a nuclear-powered engine that enables interplanetary travel, but still confines humanity to the solar system) works, responds simply by saying “Very well. Efficiently.” It’s a tongue-in-cheek answer that perfectly captures the novel’s approach to its science. It’s there, it works, and that’s all the reader needs to know. Corey skips the theoretical physics lessons and turns all the attention to the various characters that inhabit the solar system.

And Corey’s humans shine. Structurally, the novel is split into alternating chapters from the viewpoints of Jim Holden, executive officer of a creaky ice miner, and Detective Miller, a washed-up detective serving on a space station named Ceres. The easy comparison for Holden and his crew of capable misfits is Captain Mal and the crew of Serenity, from Joss Whedon’s legendary (and canceled-too-soon) television series, Firefly. There’s an easy confidence and camaraderie between the crew which only grows stronger as the novel progresses; by the end, I cared as much about Amos, Alex, Shed, Naomi, and the rest as I did for Miller and Holden; even more in some cases. Like Firefly, there’s a healthy amount of one-liners and crew banter, and though it can sometimes fall into cliché, it never never loses its easy charm. It’s a difficult dynamic for an author to pull off, but it works here and forms the heart of the novel, for the conflicts would be nothing if the reader didn’t care for the characters. Even more importantly, perhaps, is that the characters genuinely care for and respect one another, an aspect that helps the reader suspend belief as the crew squeaks their way out of one stick situation after another. They complement each other in both personality and skillset in a way that places them among the best casts the genre has to offer.

Miller, a classic noir-detective, is, predictably, an absolute foil to Holden, a fact that Corey never shies away from. He’s a natural loner, and his search for (and eventual obsession with) Julie Mao is tragic, frustrating and utterly believable. He’s as emotionally damaged as necessary for the reader to buy into some of the reckless decisions he makes on his relentless hunt to find out the truth behind the mysterious disappearance of Julie Mao and its connection to Jim Holden—a hunt that both heals and further damages Miller before the turn of the final page. His calculating, obsessive nature is a constant source of plot and character development, instigating many of the more satisfying moments in his and Holden’s relationship.

The structure of the novel is interesting in that it allows the reader to see each of the primary protagonists through both their own eyes and the eyes of the other. Reading a chapter from Holden’s perspective gives the reader a particular insight into his often righteous and rash decisions, only to see that perception flipped entirely on its head during the next chapter when Miller reflects on Holden’s actions and shines a new light or perspective on the events. This is particularly effective when they’re both working toward the same goal but with different motivations fuelling them. It’s a wonderful good cop/bad cop relationship that adds a very enjoyable vitality to a sometimes sterile setting.

Normally I wouldn’t comment on the gender of the author(s), but in this case, the novel feels like one written by two men. A lot of the prose, while unobtrusive and easy-to-read, and despite a healthy cast of well-drawn women characters, can come off very masculine, especially in the dialogue:

“Something out there has a comm array that’ll put a dot the size of your anus on us from over three AU away,” Alex said.

It was a niggling bother when I began reading the novel, despite being male myself. At times it feels very much like a novel written by dudes for dudes; but (either through my becoming accustomed to the style or the authors’ becoming more comfortable with the characters) it’s an issue that tapers out as the novel progresses; not a deal-breaker by any stretch, but it was somewhat surprising coming from Daniel Abraham, who’s written such evocatively beautiful novels such as A Shadow in Summer. I’d be interested to hear a female perspective on this aspect of the novel.

I’ve always considered the best fantasy to be that which indirectly examines our societies and the histories that have brought us to where we are now. Fantasy allows us to recast those people, to retell their stories and to explore how history might be altered if different decisions had been made or different challenges had arisen. Science fiction, on the other hand, offers us the opportunity to look towards the future and examine the decisions we are making today. Corey envisions a future that sees humans paying for their lack of conservation and inability to work together towards a greater good. Hundreds of years might have passed, and we might have left planet Earth behind, but the state of our race is startlingly familiar. The prospect of fleeing our dying planet for the stars has long been dreamt of, but what happens when we can no longer run from our problems?

Leviathan Wakes is space opera for the masses—it asks for little from its readers other than that they show up and enjoy the ride, no doctorate in quantum mechanics necessary. The classic juxtaposition of Miller’s hard-edged noir narrative and Holden’s idealistic adventure are perfectly suited for one another and together they form the most enjoyable novel I’ve read so far in 2011. It’s fast, it’s fun and it’s escapist science fiction in the purest sense of the term. One can only hope that The Expanse is expansive, indeed.

This review was originally published on Tor.com.