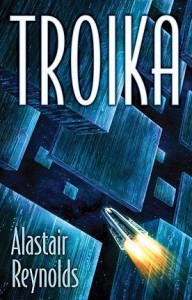 Troika, a novella by Alastair Reynolds, best known for his Revelation Space series, starts off with so much promise, but is ultimately constrained by the nature and natural boundaries of its length. Reminiscent (both structurally and thematically) of Robert Charles Wilson’s Hugo-winning Spin, Troika tells its tale through two parallel stories–one a light-thriller/mystery in ‘present’ day that deals with the fallout of the second story, a past-tense first-contact narrative detailing the narrator’s experiences with the Matryoshka, an enormous space-bound monolith of alien origin that mysteriously appears in Earth’s solar system. There’s terrific tension and mystery in both narratives, which are balanced nicely by having the narrator fleeing in the ‘present’ narrative and seeking in the ‘past’ narrative.

The setting of the novella also excels. Showcasing the space age from the point of view of the Russians (who have reclaimed the space race after all the other nations dropped out, deeming it irrelevant and/or too expensive) is a nice change of pace from the typically American- or Chinese-dominated near future space tales. There’s a certain bite to the characters and the pride they show in their status as a cosmonaut and their mission to solve the mystery of the Matryoshka.

I touched the wall. Knowledge, clean and brittle and viridescent, as brittle and endlessly branching as a flower chilled in liquid nitrogen, forced its way into my skull. I felt mental sutures straining under the pressure. I flinched back, just as Galenka had done. The contact could not have lasted more than an instant, but the information that had gushed through was ringing in my skull like the after-chime of God’s own church bell.

A window of comprehension had opened and slammed shut again. I was dizzy with what it had shown me. I already knew more about the Matryoshka than any other living person.

Unfortunately, the story falls apart dramatically in the final third. The mysteries established in the ‘present’ story are intriguing, but they’re solved in the ‘past’ through a shockingly literal info-dump cum deus ex machina. Instead of doling out the secrets of the Matryoshka through plot devices or intuitive discovery by the characters, the narrator monologues for pages, explaining everything he’s gleaned magically through contact with the alien device. It begins life as a near-future thriller, and ends as a blunt, biting indictment of Earth’s current (and future) political attitude towards space exploration. The lesson and vision of the future is interesting (and chilling, really), but the delivery is cold and leeches away any sense of wonder.

A late twist, seemingly influenced by Iain M. Banks, isn’t enough to salvage the story from the hole it digs itself into. There’s backstory and promise enough for a full novel, but Reynolds takes those ideas and squeezes them all into the brief length of a novella. It speeds up the pace considerably, but at the expense of depth and subtlety. The setting is interesting, the characters and the mystery is sufficient to keep a reader interested, but it all ends too quickly and without any satisfaction for the reader (especially the strange, pointless ‘twist’ ending.) Recently, David Weber expanded his short story, ‘Out of the Dark’ into a full novel of the same name; ‘Troika’ would benefit extremely from the same treatment.