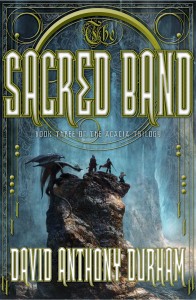 From the comments section on Durham’s blog:

Mr Durham, do you have any news about the UK publication of The Sacred Band?

Durham:
I wish I did. My British publisher has been dragging their feet. I think my editor is supportive, but the number crunchers are complaining that The Other Lands didn’t sell as many copies as they wanted. The verdict is still out on whether they’re going to bite or not, but the delay isn’t a good sign.

If you could help sell a few more copies of TOL in the UK that might help. Or, just buy the US edition. ;)

What a bunch of bullshit. Even more egregious than Tor’s treatment of The Price of Spring by Daniel Abraham, but even more disrespectful towards fans of the series by withholding the book entirely. Bantam’s not happy with sales of the series. Okay, fine. Publishing’s a business. But it’s also a business of building and maintaining a relationship with an enormous, dedicated group of fans who support the company by buying their books on a regular basis. This is just a reminder, however, that there comes a time when a publisher should ditch their pride, cut their losses and do something for the fans, rather than strictly for the bottom line.

Adam Whitehead points out some similarities to Bantam’s treatment of Paul Kearney’s The Sea Beggars:

Bantam UK does seem to be the most drop-happy of the UK SF&F publishers, having canned Paul Kearney’s Sea-Beggars series after the second volume. In fact, the circumstances seem to be almost exactly the same: they market Book 1 strongly and it sells quite well. Then Book 2 sneaks out with no fanfare at all and sinks without a trace (I had no idea The Other Lands was on its way until it was already on the shelf). They then panic at the under-performance of the second volume and drop the series. The only difference is that with Kearney they also retitled the second book just a few weeks before release, completely confusing the few people who did know it was coming out.

Famously, Kearney nearly quit writing as a result of that fiasco. Durham, however, is more optimistic:

I was (well, I still am) planning on going to cons here, promoting the series, doing what I could on UK soil to help the series. I still will, but it’s a bit of a bummer not to have a British edition in hand as I do so. (And yes, my UK publisher does know that I’m here for the year.)

I think there’s still a good chance they will publish it here in some version, but, no, clearly it’s not going to be the full press of a large format paperback that comes out near the US edition.

No matter how you cut it, Bantam looks like a bad guy here. I can buy into the Bantam dropping an author after the conclusion of his or her sales, but it’s not easy to justify leaving fans high-and-dry by cutting them off from the concluding volume. Hell, purchase the US edits and release a damn eBook edition (where overhead cost is low) and allow fans at least some opportunity to finish the series. Is there any chance of Durham doing this himself? Luckily, in the case of The Sacred Band (but not the case in Kearney’s series), UK readers can import the novel from the states. But, really, is that an acceptable solution? Not even close.

Do better next time, Bantam.