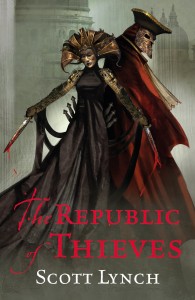 From Simon Spanton at Gollancz, via Neth Space:

Well, the months have rolled around faster than anyone could quite credit and we find ourselves in 2012 and still without that final confirmed delivery of the completed draft of Scott Lynch’s The Republic of Thieves. Sadly those who expressed their doubts have been proved right and we’re now forced to move the likely date for Scott’s publication into the Autumn of this year.

Scott is still facing up to his issues and we’re still having to face up to the wait for his book. I know which I’d rather be dealing with.

So, we send our apologies to you and our very best wishes to Scott. Thank you, on his behalf, for bearing with us. And in the meantime, of course, (and to take some of the pressure of Scott) there are plenty of other wonderful books to be reading until The Republic of Thieves does make its appearance.

Presented with not comment other than well wishes to Lynch and his family during no doubt troubling times.