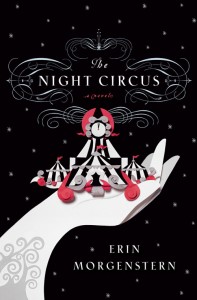 Every so often, a novel comes along that knocks me off my feet, ties me up and leaves me bound, unable to escape until I turn its final page. Even after that final page is turned though, these novels live in my memory, constanly ekeing their way into my thoughts and colouring my discussion of other, inferior novels. I’ve been lucky enough to have this experience twice in the last handful of months; first with The Tiger’s Wife by Tea Obreht (REVIEW) and now with The Night Circus by Erin Morgenstern.

Chandresh Christophe Lefèvre enters not a single tent on opening night. Instead, he wanders through pathways and concourses and walks in loops around the courtyard with Marco in tow, who is taking notes whenever Chandresh finds something to comment upon.

Chandresh watches the crowd, discerning how people decide which tents to enter. He identifies signage that needs to be adjusted or elevated to be easier to read, doors that are not visible enough and others that are too predominant, drawing too little attention or too much of a crowd.

But these are minute details, really, extra oil for inaudible squeaking. It could not be better. The people are delighted. The line for tickets snakes around the outside of the fence. The entire circus glistens with excitement. (p. 101)

The Night Circus centres around a duel between two young, promising magicians, Celia Bown and Marco Alasdair, thrust unbeknownst into competition against each other at a young age by their competing mentors. The most obvious comparison is to Christopher Priest’s The Prestige, a classic novel about a staged duel between two competing stage magicians. But this is only a surface level examination of the plot of The Night Circus. The duel itself is not really Celia and Marco’s story, but rather a it’s the tale of their respective mentors, who hover on the outskirts of every important event in the novel, manipulating everything from the shadows. The Night Circus is a story about community, and about the stories that create a community. It is the story of the people behind the circus’ creation, a labour of love and magic that defines their lives for the 30-or-so years that the novel spans; it is the story of the circus-performers themselves, in particular the young twins, Widget and Poppet, born on the night when the circus first opens; it is the story of the rêveurs, a loose group of passtionate circus-goers, ensnared by the mysticism and perfection of the circus, using it as a way to escape from life, to reaffirm themselves of the good in the world; but central to it all, the twin forces that hold these lives in thrall and on track, are Marco and Celia — their’s is a story of love and passion, discovery and the boundaries of imagination. On the surface, there are many similarities to Priest’s novel, but where The Prestige is about power and corruption, greed and seduction, The Night Circus is a tale of perseverance and free-will, of the good in life and the magic in us all.

Like the young narrator, Morgenstern seems less to be telling the story than revealing it, pulling back the layers piece-by-piece to immerse the reader in the lives of the myriad characters who help form Celia and Marco’s story. This effect is bouyed by wonderful prose from Morgenstern, so rich and evocative that it’s easy to lose yourself amongst the tents of Le Cirque des Rêves, as enraptured by wonder as the circus-goers in the novel. At one point, the narrator says of the proprietor of Le Cirque des Rêves, “Chandresh has an inherent flair for the unusual and curious; he understands the power of atmosphere. (p. 57)” I was struck by this quote and how appropriate it is for Morgenstern herself. The ability of her prose to transport the reader to this other place is profound and most evident in the several vignettes scattered throughout the novel. Unlike the rest of the novel, they are told from a second-person perspective and serve no other purpose than to set the stage, to push the reader into Le Cirque des Rêves and convince them to remember back to their childhood, when magic still existed.

In this tent, suspended high above you, there are people. Acrobats, trapeze artists, aerialists. Illuminated by dozens of round glowing lamps hanging from the top of the tent like planets or stars.

There are no nets.

You watch the performance from this precarious vantage point, directly below the performers with nothing in between.

There are girls in feathered costumes who spin at various heights, suspended by ribbons that they can manipulate. Marionettes that control their own strings.

Normal chairs with legs and backs act as trapezes.

Round spheres that resemble birdcages rise and descend while one or more aerialists move from within the sphere to without, standing on the top or hanging from the bars on the bottom.

In the center of the tent there is a man in a tuxedo, suspended by one leg that is tied with a silver cord, hands clasped behind his back.

He begins to move, extremely slowly. His arms reach out from his sides, first one and then the other, until they hang below his head.

He starts to spin. Faster and faster, until he is only a blur at the end of a rope.

He stops, suddenly, and he falls.

The audience dives out of the way below him, clearing a space of bare, hard ground below.

Then he stops at eye level with the crowd. Suspended by the silver rope that now seems endlessly long. Top hat undisturbed on his head, arms calmly by his sides.

As the crowd regains its composure, he lifts a gloved hand and removes his hat.

The Night Circus is a classic novel that will sit on the highest shelf of my bookshelf, right next to The Hobbit and The Shadow of the Wind. If you’re familiar with me or this blog, you will know that that is not praise lightly given. It calls back to a time when there was still magic in the circus, when slack-jawed carnies, enormous teddy bears and rigged ring-toss was nothing but a far-off thought. The majority of my time spent reading The Night Circus was in the early morning, before the sun rose, and at bedtime, while the moon hung in the sky and darkness blanketed the world. During the daylight hours, when I was not reading The Night Circus, I thought of little else, and I think Chandresh Christophe Lefèvre, proprietor of Le Cirque des Rêves, would be proud. In a way, I wish I could have written this review with less superlatives, more critical analysis, but I struggled mightily with the effort. So, instead, I write of the joy I found in The Night Circus. There’s magic in this novel and it deserves to be read by anyone wanting to be reminded that there is more to life than meets the eye.