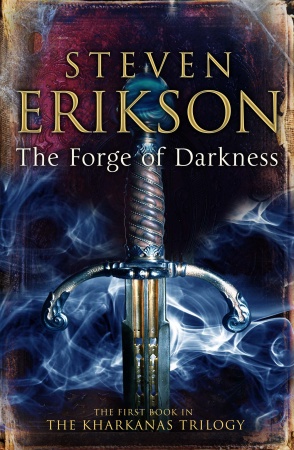 Enter the New York Times bestselling Malazan universe… at a time that sets the stage for all the tales already told.

Steven Erikson entered the pantheon of great fantasy writers with his debut Gardens of the Moon. Now Erikson returns with a trilogy that takes place before the events of the Malazan Book of the Fallen. The Forge of Darkness takes readers to Kurald Galain, the warren of Darkness, and tells an epic tale of a realm whose fate plays a crucial role in the fall of the Malazan Empire.

It’s a conflicted time in Kurald Galain, the warren of Darkness, where Mother Dark reigns. But this ancient land was once home to many a power… and even death is not quite eternal. The commoners’ great hero, Vatha Urusander, longs for ascendency and Mother Dark’s hand in marriage, but she has taken another Consort, Lord Draconus, from the faraway Dracon Hold. The idea of this union sends fissures throughout the realm, and as the rumors of civil war burn through the masses, an ancient power emerges from the long dead seas. Caught in the middle of it all are the Sons of Darkness, Anomander, Adarist, and Silchas Ruin of the Purake Hold.

Steven Erikson brings to life this ancient and important tale set in the world he introduced in the Malazan Book of the Fallen in a way that should appeal to fans of George R. R. Martin.

This is, of course, the first book in The Kharkanas Trilogy, the series of books I hinted at a couple of years ago that explores the history of Anomander Rake, a fan favourite (and supreme badass) from the original Malazan novels.

It’s interesting (though perhaps not surprising), to see them marketing this new book towards fans of George R.R. Martin. As anyone who’s read both Malazan and A Song of Ice and Fire knows, the only aspected shared by the two series are the very broad milleux of “Fantasy,” high page counts and a large number of characters. However, Erikson has hinted that this new trilogy might differ stylistically from The Malazan Book of the Fallen, but I just can’t see a trilogy about Anomander Rake skipping out on the over-the-top magic to deal with the subtleties of politics and medieval warefare. Characters named “Lord Draconus” also suggest that the comparison to Martin may be more of a marketing convenience than an honest suggestion…