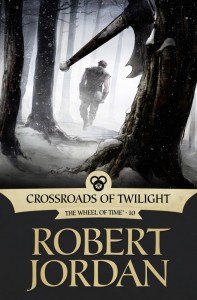 Drake’s position as a Tor author might have given him some more insight into the situation than the average industry person (and many off-the-record conversations are likely to happen, especially with regards to such a highly-touted and successful series as The Wheel of Time) and certainly more than fans, but it rings odd to go out of the way to speak publicly about a fellow author in such a way. Drake was also involved in Robert Jordan’s Citadel memorial dedication (2008), suggesting that his comments weren’t meant as an attack against a friend, but as an attempt at clarifying the regrettable direction his friends’ series had taken in recent volumes.

Andrew Wheeler had a different understanding of the situation:

[W]hat I heard at the time was that Tor knew nothing about the content of the last few main-sequence “Wheel of Time” books until they arrived in the office (already edited by his wife and editor, Harriet McDougal). Also, if you look at the solicitation catalog copy for those books, you’ll find that it is exceptionally vague and often bears little relation to the final book — usually a sign that the folks in the office have no idea what will be in that book.

The conversation also gives some fairly detailed (but anecdotal) ideas of the sales numbers for the series and the revenue it produced during that period for Jordan and Tor Books. Certainly some striking numbers and, given the flaws in the series (especially the glacial pacing of books 7-10), one has to wonder if there isn’t some truth to Drake’s words. That’s not to say that Jordan was manipulating his readers or maliciously milking them for cash, he was too dedicated to his craft (especially when one considers the monumental efforts given in the weeks before his death to ensure that the necessary materials existed that would allow Brandon Sanderson to step in an finish The Wheel of Time) to intentionally damage the integrity of the series, but if there’s one thing that many writers of Epic Fantasy fight against, it’s falling too in love with their own creation and allowing that passion to get in the way of the storytelling that originally defined the strengths of their series. It’s generally an editor’s job to make sure that this doesn’t happen. The Shaido/Faile, the Bowl of Winds and hey-it’s-that-again! Circus Troupe storylines in The Wheel of Time all feel like aspects of the series that Jordan probably loved, but that a determined editor could (and should) have pruned down significantly. With Tor’s bottom-line affected so heavily (and positively) by each release in Jordan’s series, you can’t blame them if, all of a sudden, they started to encourage him to delve deeper into side-stories and characters that should have remained shallow facets of the series. And can you then blame Jordan for taking the long leash he was given and running with it? Fans were still buying, and loving, the novels, after all. We’ve seen this same thing happen with George R.R. Martin in recent volumes of A Song of Ice and Fire and, some would argue, Patrick Rothfuss’ The Wise Man’s Fear.

This conversation began on September 19th, 2007, just days after Jordan’s passing (which, it could be fairly argued, is in somewhat poor taste), and opinions/truths may have changed in the five years since, and other discussions may have been held that properly refute these claims/suggestions, but I thought it was interesting nonetheless. What do you think about Drake’s comments?