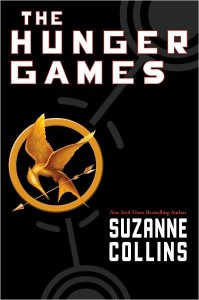 Kennedy examines what makes Katniss a catalyst for change in her world and has me thinking about some of my concerns regarding her passive role in the novel, and whether she’s not something of an unreliable narrator who unintentionally plays down her role in events or is just plainly blind to the effect she has on other people. The ideas presented by Kennedy have me reconsidering many of the opinions I originally formed after reading the novel.

The second article, from which the title of this post was taken, is called “Could The Hunger Games Really Happen?“ Nancy Lambert explores the themes and worldbuilding of The Hunger Games, the current state of entertainment and reality television and whether the Hunger Games could ever really happen.

Let’s face it, as a species, we don’t exactly have a stellar track record when it comes to treating human life with tenderness and care. In ancient Rome, watching gladiators, prisoners, and slaves battle wild animals, and each other, to the (often gruesome) death was a popular, accepted, and often celebrated form of entertainment. Back in Medieval times (the era, not the dinner theater), nothing drew a crowd like a good ol’ execution—many of which were all-day affairs involving nearly unimaginable forms of torture.

Of course, the premise behind The Hunger Games is much closer to gladiatorial events than public executions. However, the latter does prove that until rather recently, Americans were still cool with getting together to watch other people die. As a society, could we go back to that mindset again?

So, does any of this mean we’re headed straight for Panem ourselves? Truthfully, I don’t think so. I’d like to believe that some of our gains as a society (and as a species) are permanent and that any attempt at creating a real-life Hunger Games would never be allowed. But, then again, perhaps future-me will be rereading this post on my iBrain 3 (Apple, call me!) with a touch of bitter irony as I prepare for battle in the 2060 GeriGames (“Social Security, You Have to Earn It…Again”). Either way, may the odds be ever in your favor.

One of my major criticisms of The Hunger Games was that I did not feel that Collins did not adequately justify how the government, society and economy in The Hunger Games could last for so long without crumbling under its own hedonism. Lambert and I tred similar ground by hoping that “some of our gains as a society (and as a species) are permanent,” which was a basis for my argument in my review. She explores these ideas by tackling such testaments to humanity as Toddlers in Tiaras and some of the Internet’s greatest bullshit and, in general, presents some ideas that I hadn’t originally connected to the transformation of our society to the one portrayed in The Hunger Games.

In addition to these, The New Yorker recently ran an article called “Keeping The Hunger Games Kid Stuff” that also touches on some of these elements and looks at how the film was attempted to make the often brutal novel accessible to a young audience.

These articles, along with the discussion in the comments section of my review, have had me thinking about The Hunger Games and my reevaluating both my opinion and relationship with it. The authors often have contrary opinions to my own, and I hope that you will find something of value in there to chew on for the weekend.