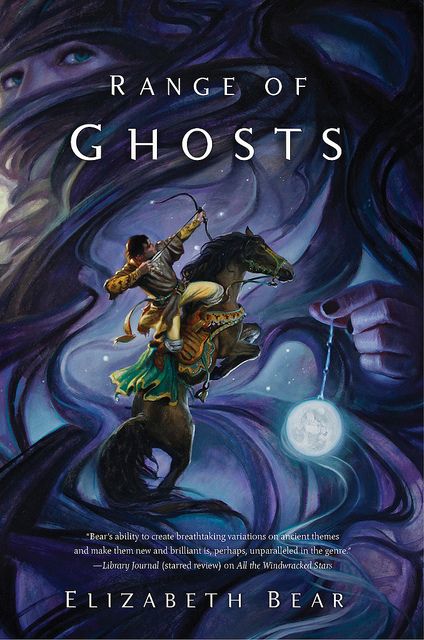 So, I’ve never read any of Elizabeth Bear’s long fiction, despite being aware of her strong and respected reputation within the SF/F fan community. I did, however, really enjoyed her short story “The Horrid Glory of Its Wings” (REVIEW) I’ve recently stumbled into several glowing reviews of her latest release, Range of Ghosts, which is the first volume of The Eternal Sky trilogy, and she’s now firmly back on my radar. Tell me you’re not intrigued:

Range of Ghosts is a strong beginning to a big story about fascinating, flawed, believable people. I closed the novel with a desperate curiosity about what comes next, for the characters and their world; I found the book itself to be a well-written, well-constructed read with precise prose dedicated to balancing fifty things at once in most scenes. All around a great piece from Elizabeth Bear, and I recommend it for readers who want stunning, crunchy world-building, complex conflicts, and women characters who aren’t just strong but are also powerful. It’s the “big, fat fantasy with maps” you’ve been waiting for, if you’re much like me.

Bear’s novel is carried on the back of a thoughtfully constructed and flawlessly articulated world. That isn’t to say she’s dumping information left and right, rather she instills an inherent sense of wonder that pervades, and in many ways overwhelms, the characters and plot. It’s not that her plot or characters are weak, the world is just that good. With a different sky for every kingdom, a system of magic that has costs and limitations, and a cultural depth that codes realism, Range is a thoughtful exploration of culture and the right to rule.

Elizabeth Bear is one of the best writers in genre today. Period. She’s dipped her pen into more and more subgenres of Fantasy and Science Fiction and now, it seems, she seems intent on conquering epic fantasy. Given her abilities and strength of craft, if you have the slightest interest in epic fantasy, Range of Ghosts will push your buttons in all the right ways. It would take a tremendous set of other books from other authors for the rest of the year for Range of Ghosts not to make my 2012 Hugo ballot. Whether you are familiar with her work, or have tragically not picked up her novels or read her short fiction, here is the book of hers to read. Do it.

Bear herself also has an interesting take on the Fantasy genre and some of the ideals that led to her deciding to write her first Epic Fantasy:

I’m a fan of Guy Gavriel Kay’s Fionavar books, for all their slightly string-pulling manipulativeness. I love the way he takes every possible overplayed trope of fantasy and dumps them all into the same pot–and then pokes them with sticks and makes them fight. But I knew I didn’t want to do that. I wanted a narrative with elements of quest in it, but not simply a quest to reclaim or destroy the magic widget that makes the story go. I wanted a book that would shift scenes from city to city, from culture to culture — and I knew I wanted a world that wasn’t inhabited by nothing but Europeans.

In fact, I was pretty sure I wanted to dispense with the Europeans all together.

In the meantime, I was researching Central Asia and North Africa and their border cultures, and trying to come up with my own world inspired by those settings but not too derivative of them. I didn’t want to write a historical fantasy — or even an ahistorical fantasy, like Conan, which purports to take place in the antediluvian history of our own earth. I very much wanted a fantasy world, it’s own place, with a few thousand years of history as backdrop.

This was one of the tools I wanted to use to interrogate fantasy monarchism a little bit. Too often, fantasy relies upon eternal empires, which must be maintained at all costs against the forces of chaos. But in the real world, empires fall – -and that’s not always a bad thing. A mature empire is a stagnant thing, and it’s hard in this modern world to ignore the implications of conquest, colonialism, and oppression that come with the act of building empires.

My wife is an Anthropology Major and, because of our location on the west coast of Canada, her area of study focusses very directly on the aboriginal people of Canada and the ongoing effect that European colonialism has had on their society. We have a lot of long discussions about these topics. Like Bear, I think that colonialism and its impact is a ripe target for Fantasy and that immediately draws me to Range of Ghosts. And, well, calling on Guy Gavriel Kay and his handling of other cultures in Fantasy as an inspiration should be enough to perk up the ears of any serious Fantasy fan.

Also worth a look is her “Big Idea” on John Scalzi’s blog, Whatever.

Range of Ghosts is published by Tor Books and is available now.