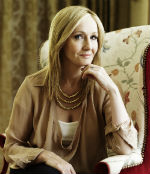 When Barry Fairweather dies unexpectedly in his early forties, the little town of Pagford is left in shock.

Pagford is, seemingly, an English idyll, with a cobbled market square and an ancient abbey, but what lies behind the pretty façade is a town at war.

And the empty seat left by Barry on the parish council soon becomes the catalyst for the biggest war the town has yet seen. Who will triumph in an election fraught with passion, duplicity and unexpected revelations?

I’m calling it now, Fairweather was a squib.

In seriousness, I’m looking forward to this, despite it having no seeming ties to the Harry Potter universe. I was considered Rowling’s humour to be one of the under-appreciated strengths of the Harry Potter universe, and to see her embrace that in The Casual Vacancy has me curious. Plus, well, I’ve long had a soft-spot for small town murder mysteries and I think Rowling will do an admirable job, especially if she’s able to capture some of the community-as-character magic that helped Harry Potter climb to such heights.

The Casual Vacancy will be released on September 27th, 2012 by Little, Brown.