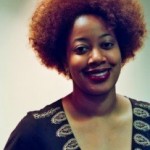 N.K. Jemisin spilled the beans today about a new trilogy that she’s sold to Orbit Books, who published her previous two Fantasy series. Like those, this is also Epic Fantasy, but the setting is sure to capture your attention:

[T]his will be a postapocalyptic epic fantasy trilogy, set in a world of seismic magic users and enigmatic nonhumans called stone-eaters. I’m experimenting with writing the kind of trilogy that follows a single character through mutliple [sic] books.

Seismic magic? Post-apocalyptic Epic Fantasy? Enigmatic nonhumans? I constantly find myself envious of her imagination. Where do I sign up?

As always, I’ll pass along any news or details about Jemisin’s next (next?) series as I unearth it. Meanwhile, Jemisin is set to release her fourth novel, The Killing Moon, the first volume in The Dreamblood Duology, tomorrow, May 1st, 2012.