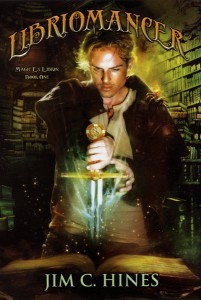 It all began five hundred years ago when Johannes Gutenberg (yes, that Gutenberg) started a project to control magic. He founded a secret organization known as Die Zwelf Portenaere who “took an oath to preserve the secrecy of magic, protect the world from magical threats, and work to expand our knowledge of magic’s power and potential.”

With great power comes great… enemies… and now Gutenberg’s been kidnapped. Vampires are attacking indiscriminately in violation of treaty and Isaac seems to be in the middle of it. Along with his oak cudgel wielding dryad girlfriend (friend who’s a girl!), Isaac has to find the unknown dark power that’s manipulating it all.

Hines’ previous work, Jig the Dragonslayer and Princess novels, fall into an odd category of young adult appropriate with lots to love for the adult reader, or so I interpret them. I went into Libriomancer expecting an urban fantasy with much that same style. On finishing, I felt vindicated in my assessment. What I didn’t expect was how much I would love it.

I don’t really enjoy urban fantasy. Combine it with something appropriate for younger readers and I was sure I would find it without substance and overly reliant on tired tropes like sardonic protagonists and predictable romances, following linear mystery and/or thriller narrative styles. While Hines uses many of those tropes, he does so in a consistently clever way. The romance isn’t predictable, the protagonist isn’t sardonic as much as he’s unsure and occasionally bumbling, and the plot has the kind of timing and pace I would expect from a legendary stand up comedian. That isn’t to say Libriomancer is a laugh at minute, it’s not, but the same techniques that separate an average comedian from a great one are likewise present in Hines’ novel. The rise and fall of the action, the use of conflict and romance, and all the other disparate parts come together in a glorious harmony that will challenge anyone to not be entertained.

I’ve often heard novels described as “fun”. It’s a moniker usually reserved for novels that don’t meet some lofty literary standard. “Fun” novels exist to pass the time, to escape the moment. In that way Libriomancer is “fun”, but that adjective falls woefully short.

Anyone who’s ever read a genre novel has imagined themselves in it, a participant in the world, or at least what it might be like to wield the magic sword and trace an incantation in the air. Hines exploits that emotion, plugging right into it with his magic system that blends the real world with the fantasy of genre stories. To such a degree that Hines provides a bibliography in the back listings all the novels his characters “drew” from (literally) in Libriomancer. It all communicates a passion for genre fiction that I felt can only be captured with one word–Joy.

Jim C. Hines’ novel is an ode to genre and all the joy it’s brought him.

Jim C. Hines’ novel is an ode to genre and all the joy it’s brought him. A joy that he brought me as I read it. Even if I’d never read his blog, or the other “fan” writing he’s done, I would give him the Hugo Award for Best Fan Writer solely on the credentials displayed in this novel. It’s a fantasy novel written by a fan, for fans. I would strongly recommend anyone who’s characterized themselves as such to read Libriomancer as soon as possible. 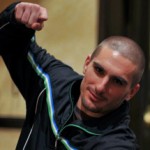