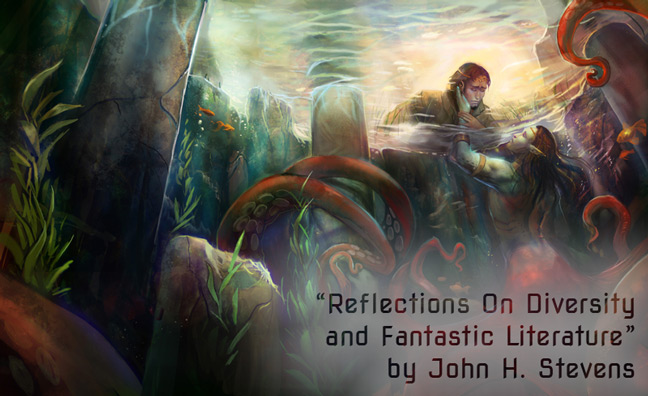 Last week Aidan wrote a post stating, quite simply, that he had decided to take the Goodreads Challenge to read a certain number of books this year. He also wrote that he was going to consciously strive for “an equal split of gender” in his reading. There was no judgment of others’ reading habits in the post, just a pledge on his part to find more female authors and diversify the range of novels he was reading. And while some commenters applauded Aidan’s idea, others found it problematic, if not implicitly damning of their own method of choosing novels to read. A spirited discussion ensued and as I followed it I wondered about my own reading patterns and habits in relation to balance and diversity.

I read a pretty narrow range of fantastic fiction, mostly space opera and epic fantasy, when I started reading fantastika intentionally. I had a soft spot for sword-and sorcery and for dystopian writing, for planetary romance and, briefly, military SF. Early in my mature reading life (early 1980s) I was fortunate to be pointed to authors from more diverse backgrounds – authors such as Delany and Disch and Russ – but they were a few different voices in a much wider realm of heroic fantasies and crackerjack adventures. It took some conscious thought to branch out further into the much wider field of fantastika. It was exciting and comfortable to keep reading the literary descendents of Asimov, Heinlein, and Bradbury, but I soon felt like a magpie looking for more shiny things that could line my nest. And that was not what I was looking for out of literature.

So, I intentionally started reading more broadly, moving past the subgenres that I loved and looking for work that compelled me to ask questions. I found Octavia Butler, Somtow Sucharitkul/ S. P. Somtow, and others, partly as a result of intentionally searching for new authors and voices, and partly from talking to other fans of fantastic literature who pointed out and recommended writing that was out of the ordinary. This was further encouraged by a growing realization that if I did not take the time and energy to seek out new work I would keep reading in a rather circular rut of story types and not develop as a writer nor as a skilled reader. For me, this meant not just looking for something that was considered part of the canon or a “good read” but that had stimulated a passionate response in other readers. And that meant specifically seeking out (in genre moreso than “mainstream” fiction) writers who were not male or who had a similar Anglo/Irish/American background to my own.

It meant looking at literature with a curious intentionality, purposefully considering that an author’s background and experiences influenced what they wrote and might result in something refreshing and profound. Novels are not mirrors of aspects of an author’s life or ideas, but they are enlivened and quirked by what an author puts into them, through language and structure and ideas of how the world does/might/could work. Seeking and engaging diversity – whether of gender, sexual orientation, race, or any other designation – is neither about PC social engineering nor is it about submitting to some erosion of quality in the name of balance. It is about respect for the literature being produced and about taking the actual variety that is offered in the literary field seriously. If I maintained that “just good stories” were all I was looking for in fiction I would never venture far from the commercial center of SF and fantasy. None of the fantastic genres have some natural core of good stories, and even if they did for me “good stories” are not enough. If a reader wants to be challenged, astonished, or unsettled, they have to venture far and wide to find those elements in fantastic literature.

Naturalization of the process by which we look for stories is an act of arrogance. It presumes that a reader has a privileged position from which they can easily see the field of literature laid out before them. Stories do not come in plain brown wrappers like some generic commodity (well, not yet at least). Sometimes we find stories by accident, but most of the time someone has put one before us. The field of literature is not some Edenic grove of wonders; it is a tangled forest with some clear paths. Walking along those paths we are offered many treats, but the best stuff of often found by cutting through the thorny underbrush, by making one’s own path through the endless woods and making new paths, new invitations to explore. That is part of loving literature, for me, and the constant search for stories is inseparable from the process of reading them

The funny thing is that, in the constant pursuit of diversity, I find myself encountering such literature across the spectrum of identities and positions. Looking for diversity is a multi-faceted endeavor; the trick is the long term is not to create perfect balances in numbers, but to find out what literature is capable of and to experience the range of possibilities for stories. That also means looking across time and societies, understanding that the sea of stories is deep and full of all sorts of life. For me this means trying writing that sometimes does not work for me or that I am unprepared to engage. This means taking chances not just in terms of whether I will “like” a book or not, but whether or not I am ready to read it. I am quite happy that I frequently am pointed to or encounter writing that surprises me not just happily but painfully. Reading diversely is not just about finding stories that resonate, but also ones that upend you, that make you feel bad, that even wound you.

And I am much happier as a writer and reader that this is what I get for the trouble of looking for the new and hidden, for the marginalized and lunatic edges of literature.