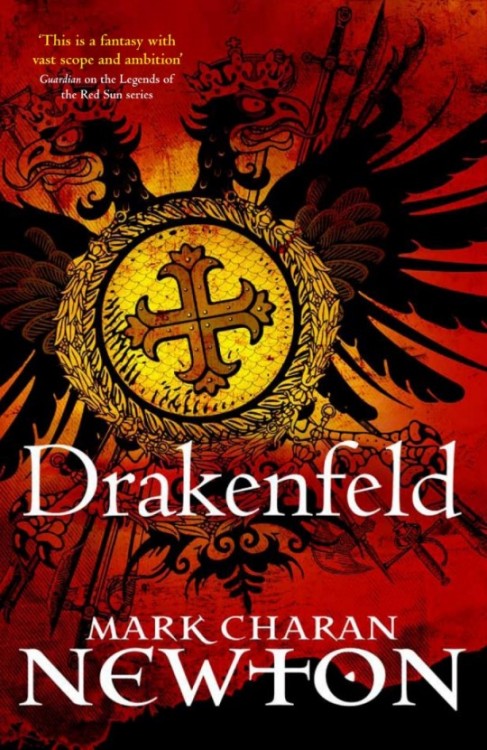 I’ve made something of a career out of ripping into the many covers for Mark Charan Newton’s novels. Sometimes it’s in good fun, sometimes I’m legitimately offended. He’s got so many covers at this point that I’ve lost track of them all. This time around, however, Pan Macmillan has crafted together a cover that, I, well… like. It’s impactful, maybe a little plain, but steps away from the more traditional ‘Epic Fantasy Hooded Figure/Badass/Brooding’ cover trao that a few of Newton’s other covers fell into. I wouldn’t be surprised to see this angled at a Historical Fiction audience.

Newton discusses the cover, and why he feels like it fits so well:

Of all my many covers, this is by far the best and most appropriate. It really sums up the book, because nations (or rather nationalism) are core to the series, and the idea with the covers is that each novel features a coloured banner representing the country in which the novel takes place. The one above is the banner of Detrata, with a double-headed falcon, various glaives and swords and a lovely icon. It also evokes the classical world, which was – as regular followers of the blog might have guessed – a major inspiration for the novel. I like to think that the main continent of Vispasia could sit just off the classical maps, as some forgotten corner of the world yet to be discovered by archeologists.

I’ve read a portion of an early draft of Drakenfeld and enjoyed it quite a bit. I think Newton is spot on in his description of the cover. The multi-coloured flag approach is interesting, and, should the publisher follow through with it, should provide a nice looking set of books when the series is done.