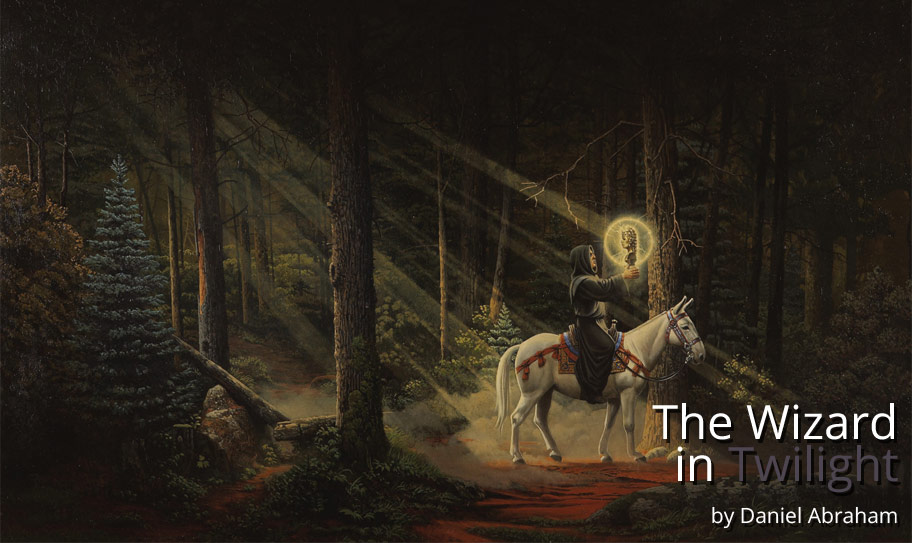 “Poker is a man’s game,” Josh’s daddy used to say, “because it isn’t fair.”
–Galveston by Sean Stewart

Back in college I was in a roleplaying game set in medieval Europe, only with wizards. It was called Ars Magica. And one of the things that made it interesting was that, in that world, wizards didn’t die of old age. Either they died by violence, or else they just went . . . elsewhere. They fell so deeply into the magic that they stopped being part of the world that you or I experience. That process of moving on was called the wizard’s twilight.

About the same time I was sitting around a friend’s living room pretending to be a Latin-speaking wizard somewhere in 1300s Scotland, a guy named Sean Stewart won the Aurora and Arthur Ellis awards for a book called Passion Play. A couple years after that, he got the Aurora again for a book called Nobody’s Son. And the year after that, the New York Times named his novel Resurrection Man the best science fiction book of the year. And he kept getting better. A couple books later, Mockingbird was a finalist for the World Fantasy Award along with being a New York Times notable book of the year. In 2001, his novel Galveston shared the World Fantasy Award with Tim Powers’ novel Declare, beating out Guy Gavriel Kay, Paula Volsky, Phillip Pullman and China Mieville.

And after that, he couldn’t sell his next book.

He was taller than me, thin, friendly, accessible, and intense. He had an accent that slipped between his childhood in Lubbock and his adulthood in Alberta.

I met him at a writer’s workshop in Taos. He was taller than me, thin, friendly, accessible, and intense. He had an accent that slipped between his childhood in Lubbock and his adulthood in Alberta. In the course of that week, he told three anecdotes from his life; one about the time he was painfully stupid and got away with it, one about the heartbreak of reaching his dreams and realizing that they weren’t at all what he’d expected, and one that I won’t talk about except to say it helped me when my own daughter came into the world.

He also gave me the best short story critique of my life, and I’ve had a lot of those. He read my story, told me what was wrong with it, what my own psychological problem was that had made it that way, how to address my psychological issue, and how that would fix the story. He was right, and he did it with enough tact and gentleness that it didn’t hurt to hear. The story he advised me on was what caught the attention of the woman who later became my agent.

That year, or maybe the one after, I went to his reading at Worldcon. He read the first chapter of the book he’d written after Galveston. The one that he was having trouble selling. The last sentence of that reading haunted me for years. I can still remember the hair on the back of my neck rising when he finished.

I didn’t know it when it started, but in 2001, Steven Spielberg’s movie A.I. was quietly inspiring something that was – to my mind anyway – more creative, powerful, and important than the movie could hope to be. As a kind of guerilla marketing campaign, a small group of people were putting together what Stewart calls “a massive web-based scavenger-hunt/soap opera.” Web sites began to appear that existed within in the world of the film, linking to one another. There were puzzles and an instant community of people solving them. The game had the best parts of roleplaying and storytelling and extemporaneous theater. It reacted to the players solving the puzzles, and it did it with no time for second-guessing.

Another writer on the project told Sean “You know, Sean. I like your novels a lot, but you were born to do this.”

By the time Small Beer Press came out with the novel Perfect Circle and the hair on the back of my neck finally got to come back down, I was becoming aware that Sean was in strange waters. He was asking people for things like the locations of payphones that would accept incoming calls. He was working on things that he couldn’t talk about. He was part of a company called 42 Entertainment that was doing something most of us didn’t understand. And then the promotional trailer for Halo 2 came out in movie theaters across the nation and for a quarter of a second the web address at the end of the trailer changed from xbox.com to ilovebees.com. Soon people across the country were following hints and clues, arriving at specific places at specific times. A payphone would ring and speak in the voice of a rogue artificial intelligence called the Operator. The game was calling people. And behind the game: Sean Stewart, puppetmaster.

He went on to write Cathy’s Book, Cathy’s Key, and Cathy’s Ring, books that ballooned out into the world where readers can call the phone numbers listed in the text and find more of the narrative there, where the characters in the book can respond to email, where the story interweaves itself with the real world and becomes bigger and stranger and more than what we’re used to. Maybe more than we’re comfortable with. But our kids are going to live there.

Sean Stewart wrote some of the best speculative fiction of the 1990s and early 2000s. And then, like a wizard in Ars Magica, his career didn’t die, but moved on into someplace none of us who were left behind could really understand at the time. He helped to invent a new art form, one that’s still evolving and changing and remaking itself now. He doesn’t do readings at Worldcon anymore; he does presentations at TED. The world of speculative fiction is poorer for his change of venue, but the world is richer.

As a writer, he was brilliant and critically recognized, and commercially, he was a flop. It says more about us than it does about him, and what it says about us — I don’t think Josh’s daddy would mind if I paraphrased – is that publishing is a game for grown-ups because it isn’t fair.