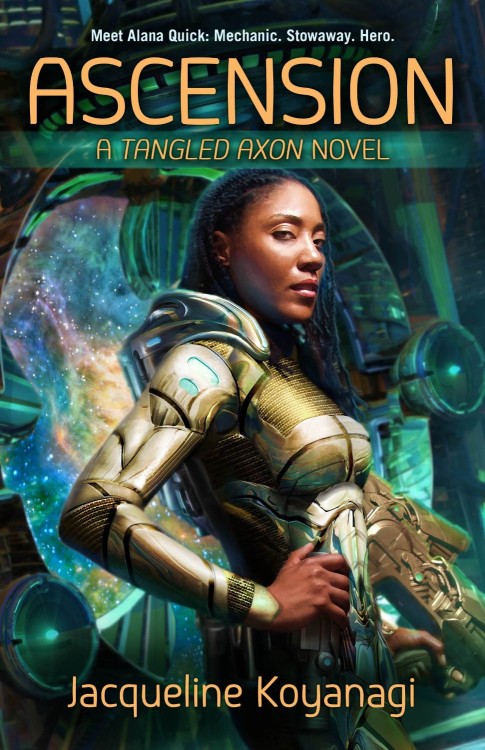 Okay. So, maybe I made up the quote in the title, it’s not from this book, but, well… it’s true, no? Just look at this awesome cover.

I think we can all agree that, in general, there is a lot of pretty awful Fantasy and Science Fiction cover art these days, right? Sure, there’s some great work being done (like this, or this), but there’s also a proliferation super generic, dudebro, fistbump, “Pass me my hood, brah”-style covers that do little to improve the mainstream opinion that Fantasy is for kids, or neckbeards living in their parents’ basement.

That is, of course, patently wrong. Fantasy and Science Fiction is for women and men. It’s for children, adults and everywhere in between. It’s for Chinese readers, Canadian readers, Moroccan readers and Samoan readers. It’s for rich people, and poor people. It’s for you, me, and everyone else. So, why don’t we have more covers like the one for Ascension: A Tangled Axon Novel by Jacqueline Koyanagi? Yeah, maybe the pose and boob armour are tacky, and it’s just another character-portrait-over a funky, space-y background, like we’ve seen a million times before, but, god dammit, it’s nice to see Science Fiction that challenges the accepted norms in publishing trends and respects the diversity of its readership.

Alana Quick is the best damned sky surgeon in Heliodor City, but repairing starship engines barely pays the bills. When the desperate crew of a cargo vessel stops by her shipyard looking for her spiritually-advanced sister Nova, Alana stows away. Maybe her boldness will land her a long-term gig on the crew. But the Tangled Axon proves to be more than star-watching and plasma coils. The chief engineer thinks he’s a wolf. The pilot fades in and out of existence. The captain is all blond hair, boots, and ego… and Alana can’t keep her eyes off her. But there’s little time for romance: Nova’s in danger and someone will do anything – even destroying planets – to get their hands on her!

A quick look at the biography of Jacqueline Koyanagi reveals that, “her stories feature queer women of color, folks with disabilities, neuroatypical characters, and diverse relationship styles, because she grew tired of not seeing enough of herself and the people she loves reflected in genre fiction.” Storytelling, especially in the boundless potential of SFF, should be about the infinite variations that life produces, and Koyanagi seems to get that. It’s great to see the editorial and art staff at Masque Books, including Sean Wallace (who readers might recognize from Prime Books and Clarkesworld Magazine) and Sherin Nicole, are publishing books that accept and embrace SFF’s diverse readership. Really bloody cool.

What are some of your favourite SFF covers that feature persons of colour?

Ascension: A Tangled Axon Novel is due for release on December 4th, 2013, and is available for pre-order.