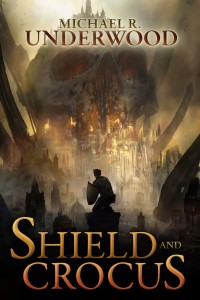 Underwood might best be known for his urban fantasy, but “Shield and Crocus is a project that’s been with me for the better part of ten years,” he told me.

Shield and Crocus is the story of a desperate band of heroes trying to free Audec-Hal, a city wracked by magical storms and ruled by cruel oligarchs.

So how does that decade worth of writing and re-writing look? “Shield and Crocus is the story of a desperate band of heroes trying to free Audec-Hal, a city wracked by magical storms and ruled by cruel oligarchs,” Underwood described. “The Shields have fought for fifty years, buried friends and lovers along the way, and are are close to the point of no return. If they don’t turn the tide soon, they’ll be washed away, the Shield’s struggles forgotten as the oligarchs write the history of the city in their own images.”

The gorgeous cover for Shield and Crocus, which channels Castle Grayskull from the old Masters of the Universe, erm… universe, was painted by Stephan Martinière, a choice which pleased Underwood, a seasoned publishing industry marketer. “They secured Martinière to paint the cover, and even at the black-and-white stage, I was completely blown away by how amazingly he’d captured the scale, mood, and majesty I tried to impart to the city of Audec-Hal.”

Along with the cover, 47North released the first blurb for the novel, which contains more details about what readers can expect:

In a city built among the bones of a fallen giant, a small group of heroes looks to reclaim their home from the five criminal tyrants who control it.

The city of Audec-Hal sits among the bones of a Titan. For decades it has suffered under the dominance of five tyrants, all with their own agendas. Their infighting is nothing, though, compared to the mysterious “Spark-storms” that alternate between razing the land and bestowing the citizens with wild, unpredictable abilities. It was one of these storms that gave First Sentinel, leader of the revolutionaries known as the Shields of Audec-Hal, power to control the emotional connections between people—a power that cost him the love of his life.

Now, with nothing left to lose, First Sentinel and the Shields are the only resistance against the city’s overlords as they strive to free themselves from the clutches of evil. The only thing they have going for them is that the crime lords are fighting each other as well—that is, until the tyrants agree to a summit that will permanently divide the city and cement their rule of Audec-Hal.

It’s one thing to take a stand against oppression, but with the odds stacked against the Shields, it’s another thing to actually triumph. 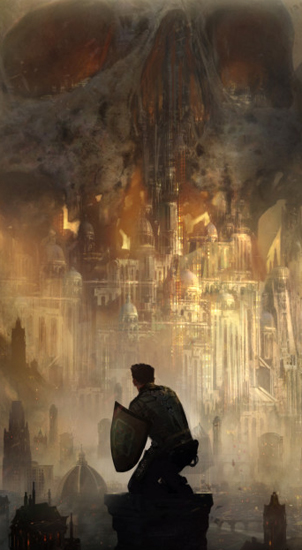 “Readers can expect high heroism, transmogrifying storms, elaborate battles, and a city that’s a character unto itself,” said Underwood.

Underwood’s elevator pitch is enough to pique my interest, and likely the interest of fans of Mark Charan Newton, China Mieville, and Steph Swainston, in addition to the general epic fantasy audience. “Readers can expect high heroism, transmogrifying storms, elaborate battles, and a city that’s a character unto itself, all in service of a story about a family of choice that comes together in defense of their home,” Underwood said. “Shield and Crocus is my attempt to bring together the innovative worldbuilding and critical punch of the New Weird with the energetic action and optimism of Heroic Fantasy. I brought a lot of influences with me to the city of Audec-Hal, from China Mieville, KJ Bishop and Jeff VanderMeer to Scott Lynch and Warren Ellis.

“It started as a short story at Clarion West in 2007, and grew into a novel after I got home from the workshop,” he revealed when I asked him about the origin of the project. He also admitted that despite his ties to Angry Robot Books, and a handful of other published novels, selling Shield and Crocus was a slow process.

“I worked and worked, revised and polished, and David Pomerico took it all the way to editorial board at Spectra in early 2011, but the book needed too much work, it just wasn’t ready. David gave me incredible feedback and I went on my way. I worked on the book for a while, then moved on, writing Geekomancy, which would become my first sale. In mid-2013, David emailed me and inquired after Shield and Crocus, since he was at a new posting at 47North and had regretted not being able to to pick up the book and nurture it to publication. I’d recently completed a major revision on spec, and so off it went. And this time, it was ready.”

Underwood is another name to the long list of exciting fantasy and science fiction authors that 47North, a genre imprint of Amazon.com, has been gathering. “Working with 47North has been an incredible experience” Underwood admitted. “They’re incredibly supportive and have given me many opportunities to be involved in the process, bringing my experience from working at Angry Robot into providing input on cover direction, positioning, and more.”

Shield and Crocus will be available from 47North on June 10th, 2014, and is available now for preorder: Book/eBook