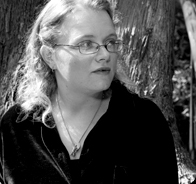 I did a Twitter poll! As it turns out, I am really, really good at destroying the world, and so sometimes I need help deciding between mechanisms. For this tryptich, it was down to either fungus or antibiotic resistance, and fungus won. I guess the answer is the easy one: I asked what people wanted, and then I gave it to them.

As the story went on, I found my feelings shifting back and forth regarding Megan Riley. Sometimes I was angry at Colonel Handleman for blaming her for having OCD, and sometimes I found myself thinking, ‘yes, she really is at fault for the way certain things worked out.’ How do you feel about Dr. Riley and her culpability in the end of the world?

I have OCD. And throughout my life, there have been things that have gone terribly wrong because I couldn’t cope with something at the beginning of the process, and so people hid it from me, or I hid it from myself. It’s a self-fulfilling prophecy sometimes, that my issues will get in the way. I wanted to explore that experience in fiction. As for Dr. Riley … I don’t think the end of the world was her fault. I think it was the fault of people who tried to protect her when they shouldn’t have done so.

Motherhood is a strong theme in this story. I’ve seen a number of stories that approach the apocalypse from the perspective of a father – The Walking Dead, The Road, and the movie version of I Am Legend come to mind – but not as many from the point of view of a mother. How do you feel about the representation of mothers, and indeed of women in general, in apocalypse stories?

I think mothers are really lacking, in part because of this belief that a good father is a miracle, and a good mother is an inevitability. It’s insulting. It’s insulting to amazing fathers, to mothers who work very hard, and to the people whose mothers weren’t suited for the job. We need to make room for everyone.

One of the most fascinating things about apocalyptic stories is the way that they manage to effectively combine horror and science fiction or fantasy, along with strong elements of human drama. Do you believe that the blending of genres is important to the power of genre fiction, and if so, what are some of your favorite examples of genre-crossing?

Have you got an exciting upcoming project that you’d like to tantalize us with?

I’m writing a comic! “The Best Thing” is updating weekly over at Thrillbent.com, and I could not be happier.

Seanan McGuire was born and raised in Northern California, resulting in a love of rattlesnakes and an absolute terror of weather. She shares a crumbling old farmhouse with a variety of cats, far too many books, and enough horror movies to be considered a problem. Seanan publishes about three books a year, and is widely rumored not to actually sleep. When bored, Seanan tends to wander into swamps and cornfields, which has not yet managed to get her killed (although not for lack of trying). She also writes as Mira Grant, filling the role of her own evil twin, and tends to talk about horrible diseases at the dinner table.