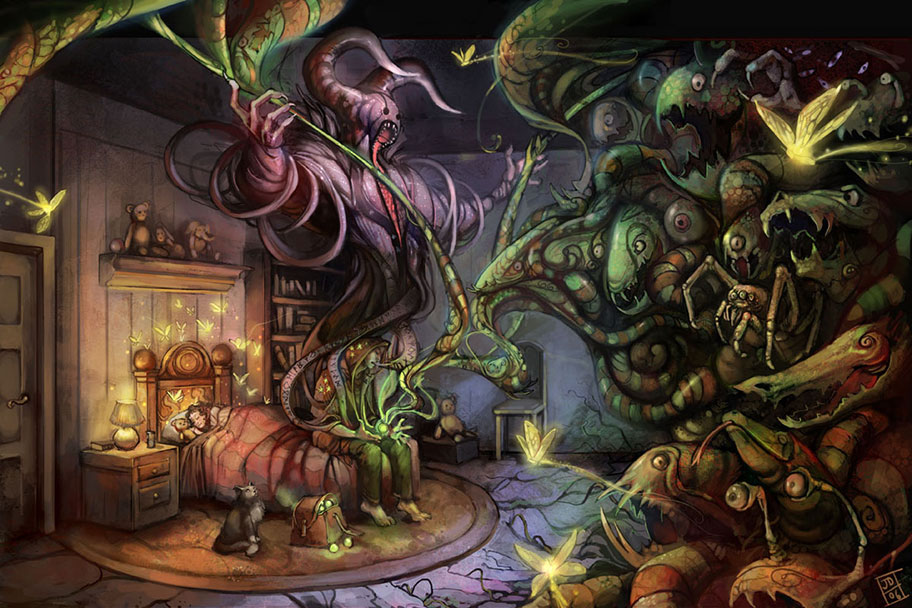 I’ve been writing a movie for Universal Pictures based on the Wild Card books that I co-edit with George R.R. Martin, and there’s a father/son situation in the script. My protagonist was a man trying to live up to the legend of a deceased father and this shows up on about page three of the script. The world is filled with images and comments about this father. Ultimately my hero discovers his father’s not dead, and then I had to figure out how Frank was going to react emotionally. What would he actually do?

What I was trying desperately to avoid was the “Luke, I am your father” moment from The Empire Strikes Back.

As I was approaching the final climactic and emotional scene between them I was utterly terrified. This was the emotional heart of the movie. If I messed this up the entire script would collapse. I found myself trying to run the other way. Maybe a secondary character could handle it? Maybe the father takes an action that removes agency from the son? What I was trying desperately to avoid was the “Luke, I am your father.” “Nooooooooo.” moment from The Empire Strikes Back. As is so often in the case of enormously popular movies that enter the culture, these scene has become both a meme and a cliche, and I really, really didn’t want to go there.

I paced the house looking for any alternative, and finally called a writer friend and outlined the problem. She listened and then she said to me, “You can’t deny myth. It’s too powerful. This is Oedipus and you have to embrace it.” She also added that this was something I had been promising from the beginning of the script and I, by God, had better pay off that promise.

Once I accepted the truth in what she was saying, a way to approach the scene that was different and (I hope) fresh occurred to me and I wrote the scene. The real test for me was whether it felt right as I was writing it, and it did. There were some brief falling action scenes that followed, but the true end was that moment between father and son.

Myth had indeed proved to be all powerful and could not be denied.

The other thread that feeds into this comes from playing BioWare’s Mass Effect franchise. I had really invested in these three games, and like many people I was horribly depressed and annoyed by the ending of the third game. Accusations were flung that the people who were upset just wanted a traditional happy ending, a “Disney,” or fairytale ending. All of these responses were of course delivered in tones of disdain implying that those of us who were angry and disappointed were clearly just immature or lacked the critical skills to recognize that real art is gritty, often bleak, etc. etc.

Is a fairytale ending really all that bad?

Again I went away to think. Okay, is a fairy tale ending really all that bad? Is there really anything inherently wrong with “And they all lived happily ever after”? There’s a lovely quote that captures how I feel about stories, and why I think it’s all right for us to embrace the fairy tale, happy ending:

The world is not respectable; it is mortal, tormented, confused, deluded forever; but it is shot through with beauty, with love, with glints of courage and laughter; and in these, the spirit blooms timidly, and struggles to light amid the thorns. George Santayana

After all, David does defeat Goliath, and Odysseus gets to come home to his wife and son, Cinderella does go to the ball, Elisa spins nettles into shirts and saves her brothers and her marriage. We know the Little Tailor will outwit the giants and the king and win the princess. Things don’t always turn out badly, and people tend to remember the good things that happened to them rather than the bad. So why not celebrate that?

We know what to expect from these stories because the ending has been promised by the beginning, and if you don’t pay off that promise you are going to upset your listener/reader/viewer/player. Perhaps we all know the parameters of the promises because humans have been telling each other stories across numerous forms of entertainment for thousands of years. The tales have “grown in the telling”, as Tolkien said — from blind poets around fire pits in ancient Greece to stone hearths in castles where the tales were sung by bards, to a Dickens novel serialized in magazines, to movie palaces and finally on televisions and game consoles.

I think the reason we can’t avoid, deny or betray myth is because it is intrinsic to what makes us human on a biological level.

But where do these promises, that I think are reflections of myth, come from? And why are they so similar across most cultures? That’s when it struck me — maybe myth was the precursor to psychoanalysis. Maybe these tales were the way humans discussed deep seated needs and drives that couldn’t be expressed or explained in any other form. Perhaps fairy tales mimic human developmental stages as we now understand them.

I think the reason we can’t avoid, deny or betray myth is because it is intrinsic to what makes us human on a biological level. Myth is, at its most basic, a function of brain structure which is why it transcends continents, language, culture and religion. It is atavistic, very human and worth celebrating.

Melinda Snodgrass was born in Los Angeles, but her family moved to New Mexico when she was five months old making her almost a native. In 1988 she accepted a job on Star Trek: The Next Generation, and began her Hollywood career. Her novels, The Edge of Reason, and The Edge of Ruin are currently available from Tor. Her latest project is the first novel in a new Urban Fantasy series featuring blood sucking lawyers, This Case Is Gonna Kill Me. Her passion (aside from writing) is riding her Lusitano stallion, Vento da Broga.