For years I had this idea in my head that every new book I wrote had to be completely different from the last, different from anything else that’s ever been written! Sigh. It took a while, but eventually I accepted that this is impossible. Well – at least incredibly rare and not always desirable. (Readers often want “more of the same”, and why not?) Virtually everything that can be written about already has been, and will be again, over and over. And that’s fine: many themes are universal because we can all relate to them. Love, birth, death, survival, finding the place we truly belong, war, crime and justice, the hero’s journey, and so on, are timeless and resonant. They don’t have to become clichés, as long as the author can bring an individual voice, pull something fresh from a well of compassion, wit or wisdom that engages the reader.

All writers can really do is stop worrying about the “invisible critic” peering over our shoulder, and write to please ourselves. That’s what made me start writing and it’s the only way I can proceed! As I went from finishing Grail of the Summer Stars to re-editing an older book (A Taste of Blood Wine, a gothic vampire romance republished by Titan Books) I was quite startled by the similarities of theme. In some ways, Stevie in Grail bears a resemblance to Charlotte in Blood Wine. They’re both unconventional, troubled, feeling out of place without quite knowing why. And both, of course, destined to meet an interestingly tall, dark stranger who is about to pull them out of their safe everyday worlds – albeit with very different outcomes.

Brutal worlds where females are secondary to the action, mere chattels or bargaining counters, may be realistic, but they’re not for me. I aim to write women who are genuine.

So one theme I note is that of female equality in my stories. I don’t write the sort of fantasy that has elves, orcs, dragons and evil overlords… (okay, maybe the occasional evil overlord…), nor the sort where a lone swordsman puts the world to rights, seduces the wenches in the local tavern, then vanishes on his way. Brutal worlds where females are secondary to the action, mere chattels or bargaining counters, may be realistic, but they’re not for me. Nor are kick-ass heroines. I prefer my characters, male and female, to operate as equals. I aim to write women who are genuine, like those I know in real life – quirky, intelligent, eccentric, brave, capable of making mistakes, and of learning and growing up.

In contrast, I seem to be fascinated by the image of the cold patriarch in an isolated tower – almost a Dracula-like figure. For example, Kristian in A Taste of Blood Wine, Lawrence in Elfland, Albin in Grail of the Summer Stars. These figures can be dangerous, fascinating, controlling, ultimately poisonous. Sometimes they can be redeemed. Sometimes there is nothing to do but destroy them.

One of the major themes that seems to crop up in almost everything I’ve written is the concept of discovering magical pathways to other worlds. That CS Lewis has a lot to answer for! I think that ever since I followed those children through the back of a wardrobe to Narnia, I’ve never got over the enchanting fantasy of finding a way into another world. My Blackbird books, The Rainbow Gate, The Amber Citadel, my Blood Wine series, even my Richard III novel The Court of the Midnight King – it’s always there, and of course hugely in Elfland, Midsummer Night and Grail. What’s that about? A symbol for escaping into the wondrous world of the imagination, I feel, where anything can happen. 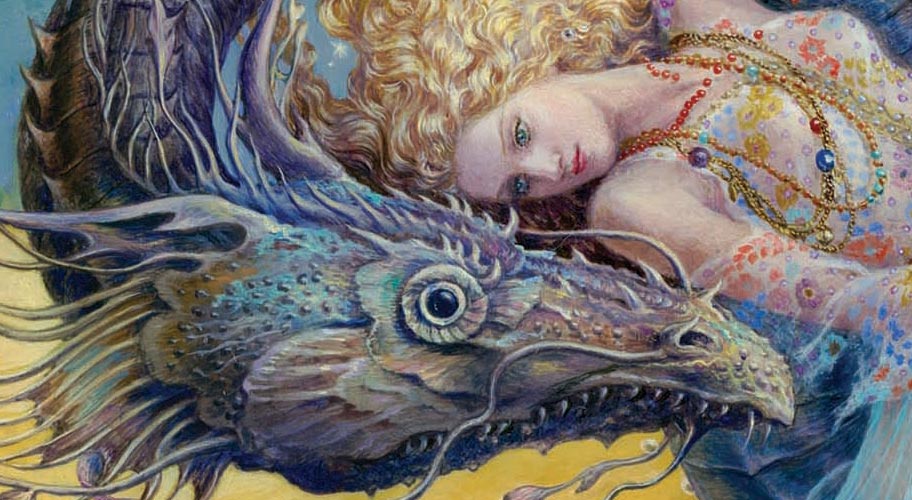 I rarely write about magic in the waving wands, Harry Potter sense. Usually “magic” isn’t even mentioned because it isn’t a separate power, it’s part of the natural world.

Undercurrents of ancient earth magic weave beneath the surface in most of my books. I rarely write about magic in the waving wands, Harry Potter sense. Usually “magic” isn’t even mentioned because it isn’t a separate power, it’s part of the natural world. For example, my Aetherials can change shape, but they don’t go through a special ritual to do this. They find their way along hidden paths to their other-realms, which they call the Spiral. They can even change the geography of those realms by working together in “webs” to distort reality – but they still don’t think of this as practising magic. It’s just what they do.

And this leads into another common theme of mine: transformation. In A Taste of Blood Wine, Charlotte (I don’t think I’m giving the plot away) becomes a vampire, which is both more wonderful and more terrible than she could have dreamed. Although my human-looking Aetherials can transform themselves, this doesn’t define who or what they are. How can I put it? Although they can change shape, they are not “Shape Changers”. Not werewolves, not were-anything. Rather, they each transform in their own individual ways – some change drastically, others manifest no more than a subtle inner glow. The bodily shift acts as an outward definition of their inner selves. What truly transforms Stevie is learning about her own past, and who she used to be, and who she actually wants to be.

Thus shape-shifting becomes the physical manifestation of a psychological journey… to me, the most fascinating quest of all. And on that note I’ve said enough and I hope you’ll travel through the strange landscapes of my Aetherial Tales with me!

Freda Warrington is a British author, known for her epic fantasy, vampire and supernatural novels. Her earliest novels, the Blackbird series, were written and published when she was just finishing her teen years; in the intervening years she has seen numerous stand-alone novels and a trilogy published. Four of her novels have been nominated for the British Fantasy Society's Best Novel award. Warrington has also seen numerous short stories published in anthologies and magazines.