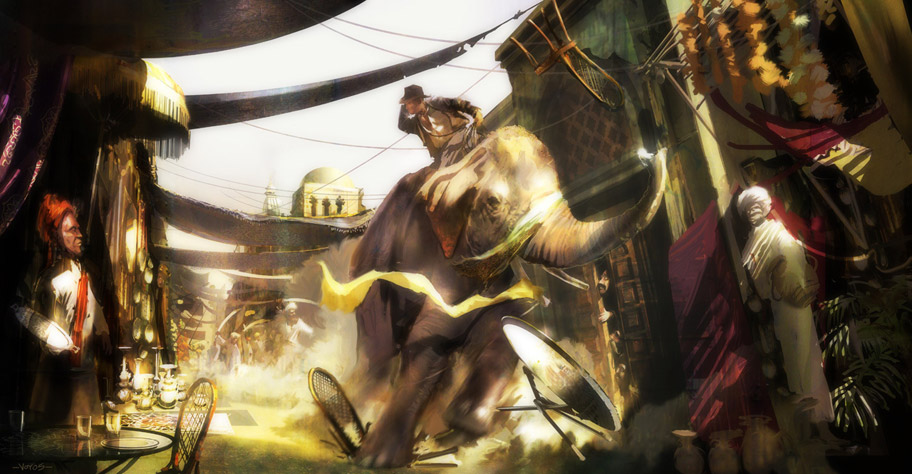 But for all the action and glory the modern adventure genre story tacks on, over the years I worry that it has lost something somehow. Adventure is classified by traveling action. One scene is in America, the next is in France, then we’re stealing some gold in Africa, and dodging explosions in Australia. These days, it seems the between Action and Adventure is only the distance put on the odometer during the course of the story.

So, let’s rewind a bit and look at the origins of the adventure genre and trace its growth into what it is now, in a post-Indiana Jones world.

For as long as stories have been told, the adventure has been one of the most popular genre’s serving to provoke thought, to speculate, to cast illumination on the world, on life, afterlife, and the infinity of the mind itself. Adventures served to entertain, of course, but back in these days, hundreds even thousands of years ago, storytelling served to educate, warn, and explore the unknown. Early examples in adventure fiction are the epic poetry of the Greeks such as Homer’s The Illiad and The Odyssey from around the 8th century B.C. Back then, the world was a wondrous place full of unexplainable marvels and unfathomable dangers.

Those stories sought to explain the world around them, to give reason to Achilles’ awesome power, and to design proof that even the most powerful foe has weaknesses and can be beaten. Those stories gave spirit to the unruly oceans, explored the mythical far away lands, and bore witness to the power of the gods. These same themes perpetuate in origin stories and myths from thousands of societies throughout modern human history.

Delving into the Spirit and the Mind

Jump a few thousand years forward to around the year 1308, when Dante Alighieri unleashes upon the world the greatest adventure it had ever born witness to: The Divine Comedy, the three part epic adventure poem, followed Dante as he was guided by the poet Virgil through the afterlife.

Dante is first led through Hell in Inferno, filled to the brim with demons, sinners, and circle after circle of unthinkable punishments, then Purgatory in Purgatorio, where he works his way up the formidable mountain of repenting sinners, then finally they bare witness to the glory of heaven in the insanely difficult to read yet utterly wondrous Paradiso. Dante used the adventure, the exploring of the unknown, not only to explain the mysterious world around us, but to delve deeper into the human mind, into morality and consequence. The Divine Comedy showcases a fully realized afterlife in all its terror and glory in a way unmatched by anyone before or since.

Meeting the Needs of the People

It’s glimpsing at the infinite breadth of the human condition that adventure excels at, and has for thousands of years. Over the centuries, writers, poets, or, more recently, film makers and game designers have found (or searched for) answers to what the people strive to understand, pine after and or otherwise longingly require. Fiction offers a world where the rules are elastic enough to explore the possibilities. It’s a testament to the genre that so many works of adventure have survived and remained relevant for so long.

But as the years passed, the needs of the people changed. At first the world was dangerous, and people needed to be warned about the creatures who stalked the woods, or about the mighty waves of the ocean that could swallow a ship whole. When they became attuned to the dangers, they marvelled and wondered about things as simple as the wind or the rising and setting of the sun. New mysteries that needed answers. And then when the people began to fear for their very souls, under the guiding hands of pious organizations, an adventure came around and exploded through pop culture to explain Heaven and Hell. Alighieri had the answers to the questions people were asking.

When we needed to be shown the ridiculous nature of our governments, adventure gave us Candide and Gulliver’s Travels.

As the world grew more sophisticated, it also lost its classic mysteries. We learned that the sun rises as the Earth rotates around it. We learned that far off countries are in fact rather similar to our own: they contain humans, not harpies.

So our adventures became more honed, but continued to focus on finding answers for the questions the every day people sought after. When we needed to be shown the ridiculous nature of our governments, adventure gave us Candide and Gulliver’s Travels (followed by the more modern classics like Brave New World, 1984, and Fahrenheit 451). We knew the world was speckled with strange locations and fascinating cultures, so adventure gave us a guided tour of the world in Around the World in 80 Days. We knew dangers of the oceans but marvelled at their unfathomable depths, so adventure gave us Twenty Thousand Leagues Under the Seas. And when we were bogged down in superstitions, Sherlock Holmes pulled them out of the dark and exposed the true nature of the world.

Throughout the centuries, adventure has been there to guide us through the physical, emotional and spiritual worlds around us. It educates, casts light on the unknown, and, finally, entertains.

One could argue that Indiana Jones might be the best adventure story of the last 50 years. When it comes to the purposes the adventure genre has served over the years, the question strikes me, what has the pinnacle in modern adventure served?

After watching Indy trot the globe and destroy a temple or two, have we learned more about other cultures? Does the world make more sense to us? Are we enlightened? No. At it’s very best, Indiana Jones entertains and does a damn good job of it. In the way of filling our minds with speculation or new understanding, the modern adventure falls short. And what does that say about the time we are living in?

Have the mysteries been solved? Has the world suddenly began making sense? No, there are a million things we cannot explain and strive to learn each day. Do we fully comprehend the endless worlds inside out own minds? No, the thoughts of a man still remains shadowed by mystery. Do we know exactly what happens after we die? No, all we know for sure is our bodies lose a few ounces and suddenly life has left its shell.

Have the mysteries been solved? Has the world suddenly began making sense?

So what does the modern adventure say about the people of today? Apparently we are bored. The vast majority of us have given up on the mysteries and simply don’t care anymore. So to stifle our boredom, adventure has given up speculating, has abandoned enlightening. The husk of the genre is what now remains doing it’s best to simply entertain.

S.C. Barrus is the writer of strange and thrilling literary adventures. His debut novel, Discovering Aberration is a steampunk adventure set for release late 2013. Currently he is running a Kickstarter Project to fund the editing and cover design for Discovering Aberration which he plans to independently publish. Please visit his campaign and consider pledging your support.