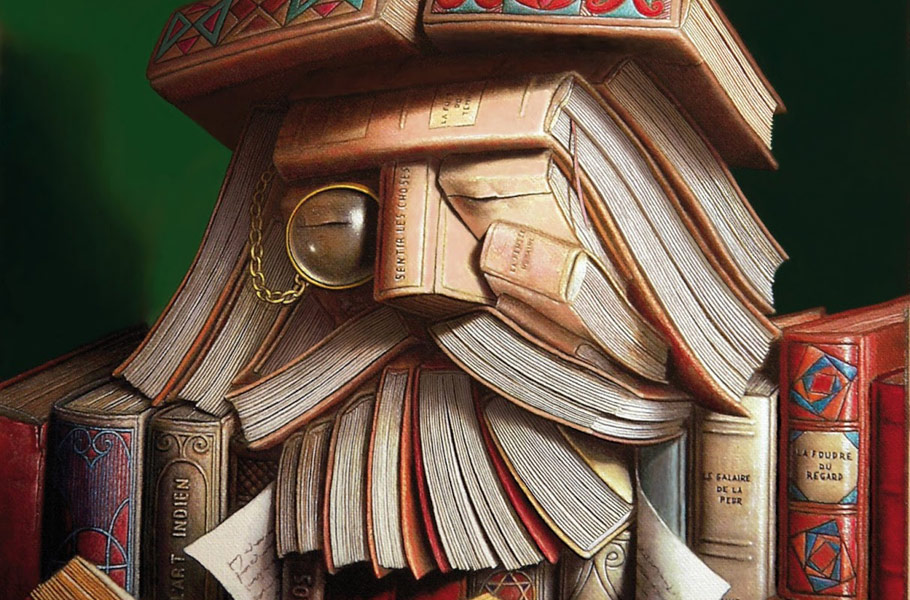 “I don’t know,” I reply. “Half a galaxy long?” I think this is a plausibly impressive size, given his enthusiasm, given the volume and intensity with which he has asked the question. He knows that I cannot tell a furlong from a parsec, but he refuses to believe that a person can live in the world without understanding basic measurement and scale.

“What!? Half a galaxy! That’s absurd! That wouldn’t even make sense to write a story about. So how long do you really think the ships in this book are?” He looks at me expectantly. There is an answer to this question – a discrete, easy-to-articulate answer – and he believes it will delight me as much as it delights him.

I bet we can agree that the sleeping / eating / bathing / drinking / sartorial regimens of most authors are, at best, absurd.

We who choose to cohabitate with authors of fiction and fantasy love our authors for a wonderful multiplicity of reasons, but if we were to reduce our loves to bullet points, I bet some of us might agree that we love them at least partly because they conjure magic from the mundane, because they bestow meaning on minutiae that we may not even pause to consider. We marvel at their insight, their creativity, their alchemical prose. We love our authors because their imaginations transform the world.

They can also be total pains in the ass. While each author is obviously his or her own special snowflake, there are things about living with an author that we, the cohabitants, might agree are… challenging. For instance, I suspect other author-lovers might agree that spending the morning in a coffee shop researching the world’s most awesome volcanic black lava calderas – just in case the visual and statistical information might be helpful for one small scene – well, it just doesn’t seem like work. I bet we can agree that the sleeping / eating / bathing / drinking / sartorial regimens of most authors are, at best, absurd. I’m guessing that we might see eye to eye on our authors’ increasingly obsessive relationship with Twitter.

Perhaps we can also agree that sometimes it can be challenging to just shoot the shit with someone who is constantly thinking about setting the scene, clarifying character motivation, moving the plot. Sometimes it gets tiring trying to hammer a conversation into something that takes the shape of a story, something that has a clear beginning, middle, and end, that reveals true and lasting personal growth. Certainly, my natural conversation is devoid of massive starships.

I am no author of epic fantasy – I’m not even a very good teller of basic campfire stories – but I’ve been known to string together a narrative of at least a few coherent sentences. Before my husband spent every day all day writing, or planning to write, or thinking about writing, we used to have normal conversations, by which I mean, conversations with no particular point. Conversations where we talked just in order to talk to each other. These days – the days when he may spend hours clutching his head trying to plausibly reconcile Annurian politics with Intarran theology in 6,000 words or less – such conversations tax his psychic reserves. Aimless chatter, questions that don’t have clear answers, stories without resolution, these are anathema to my dear writer.

Now, clearly it’s a good thing that Brian is the writer in the family. If the other adult Staveley in this house were penning a trilogy, you might have ended up with The Chronicle of This Thing that Happened When I Was Trying to Parallel Park Downtown rather than the Chronicle of the Unhewn Throne.

Furthermore, it sometimes seems that the wonders of the real world pale in comparison to the fictions my husband creates. Rarely does the cool thing that our toddler found on a hike turn out to be a portal to another dimension, or a four-headed lioncrab with molten metal claws, or the Sword of Eternal Reckoning. Usually, the cool thing is a clump of blackberry bushes, a speckled rock, or a neat patch of lichen. It’s also true that the things that happen around here on a day-to-day basis do not have particularly well-paced action or satisfying closure. No one would write a book, or even a short story, about what goes on in my day, but it really is a lovely life.

I wonder if the talent for crafting fascinating characters, rich imaginary worlds, and well-paced plots distorts our understanding of the real world. I’m always a little suspicious of people at dinner parties who can tell stories that are hilarious and touching and have a beginning, middle, and end; I’m usually pretty sure that these people have, at least partially, made their stories up. As entertainment, that kind of thing is fine, but as intimate conversation it’s worthless. The messy stuff, the boring stuff, the stuff that is neither useful nor revelatory, that’s often the stuff that makes memories, the stuff that makes our lives what they are. Maybe sometimes it’s our job to remind our writers that – Guess what! – those things are pretty cool, too.

After teaching English and history for more than ten years, Johanna Staveley moved to Vermont, where she lives with her husband and young son. She is currently engaged in a battle of wits with the local black bear and porcupine over a question of rights to the Staveley trash barrels; the bear and the porcupine are winning, but she hasn't quit yet.