Because we were in school after the change in government, many people in my generation seem to have grown up thinking of local fiction as synonymous with the kinds of depressingly tragic political books you were forced to read for class. Books about racism, poverty, apartheid  – that’s how I’ve often heard them described. South African books were grim, weighty things. Important and well-crafted maybe, but they offered no pleasure or entertainment. For the few who liked reading (we don’t have a strong reading culture) all the books you could actually enjoy came from somewhere else.

I know it was – and probably always will be – vital for us to have overtly sociopolitical literary fiction, but even as a non-white person growing up in a disadvantaged community, I seldom felt that this fiction resonated with my experience of South Africa or catered to my interests, which – shockingly – aren’t defined by the way apartheid screwed me and my family over. I’ll never be free of apartheid’s legacy, but at the same time I’ll never be so consumed by it that I expect everything we create to carry all the miserable weight of history. I don’t want to put an end to political fiction rooted in stark reality; it’d just be nice to have lots of other stuff too.

So when Lauren Beukes’s debut novel Moxyland came out, I was really happy. Suddenly local fiction could be fun and full of exciting ideas. It could have a thrilling plot that, for once, happened in the same place that I lived. It could still acknowledge or engage with our troubling history and the grotesque inequality it left behind, but it could do that without making me feel like I was chained to the past. And it could even – *gasp * – not be about South Africa at all! 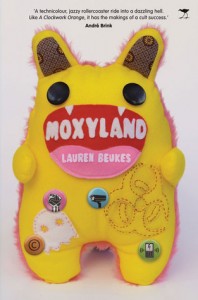 Now I’m gradually collecting all the SA sff that piques my interest – a relatively easy task, as there still isn’t that much of it. Non-fiction tends sell better here, and SA crime fiction seems to be doing well, so I guess publishers have been slow to invest in anything so brazenly ‘unrealistic’ as science fiction, fantasy or horror. Authors who want the freedom to write what they like (and get it published) may be better off approaching international or indie publishers. Nevertheless, the last few years have seen a significant increase in sff publications. The genre is dominated by white authors, but that’s hardly anything new in sff, and hopefully we’ll see more diversity as genre fiction becomes more popular. It’s an exciting time in SA publishing, an opportunity to watch a literary movement blossom.

As a kind of tribute to that, I decided to share some sff novels set in South Africa that have me particularly fired up about local fiction. They’re not necessarily my favourites, and I was very critical of some of them, but they all mean something to me nevertheless. You might not find them in brick-and-mortar stores outside of SA, but they are available on Amazon. And since most of you have probably heardof Lauren Beukes’s work, I thought I’d focus on lesser-known titles. 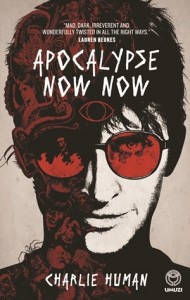 I just love the title of this novel. “Now now” is a South Africanism that, paradoxically, never means “now” but rather “soon” and quite possibly “later”, especially if you’re a Capetonian (we can be laid back like that). With that title, two spectacular covers by award-winning SA illustrator Joey Hi-fi, and an action-packed plot full of African folklore and mythology, I could never resist this book. It somehow had me rooting for a porn-peddling schoolboy who could possibly be an insane serial killer, but might also be the answer to the apocalypse (which comes later). My favourite scene featured a battle with a “township tick” – a monster that impoverished communities feed sacrifices to because it generates the electricity that keeps their lights on.

Although the excess of ideas and action in Apocalypse Now Now ended up being a bit too much for me, I still think it’s so damn awesome. The sequel Kill Baxter, came out last year and is now sitting at the top of my tbr pile. 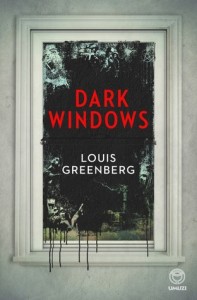 I know I started this post complaining about overtly political literary fiction, but I make an exception when Louis Greenberg is writing it. Greenberg is the “L” in S.L. Grey, pairing up with Sarah Lotz to write The Downside, a horror satire series starting with The Mall. Dark Windows is his solo project, a speculative literaray novel that’s hard to categorise.

It’s set in alternate Johannesburg, with a progressive New Age government run by the Gaia Peace party, which miraculously cured crime and provides reliable social welfare for all. I interpreted this as a commentary on current domestic politics – the idea of us having a good government that actually solves problems is as unlikely as a government based on colour therapy and herbal tea. No surprise then, that this miracle government seems to be losing a battle with the harsh reality of South Africa’s past. Some wish to topple it, perhaps just because they can’t believe it’s not a hoax. Drastic change is coming, but whether it’s social upheaval or some supernatural event prophesied by a mystic, no one really knows. 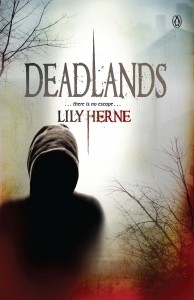 There’s nothing new about dystopian YA or postapocalyptic zombie novels, but it was pretty awesome to have one set in Cape Town, written by South African authors (Lily Herne is the pseudonym for Sarah Lotz and her daughter Savannah).

Deadlands is the first in the Mall Rats series, set a decade after a zombie breakout in the midst of the 2010 Soccer Worldcup. The narrator, Lele, is a teenager in a survivor settlement, but later finds herself with a group of teenage rebels who specialise in raiding a nearby mall.

Admittedly, I wasn’t crazy about Deadlands. There were lots of little things about the writing and structure that really bugged me. But on the bright side, it had some great characters and lots of action. All the things I didn’t like were ironed out in the sequel, Death of a Saint, which I absolutely loved. I still have to read the subsequent books – The Army of the Lost and Ash Remains. 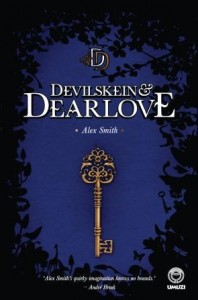 This one was on my best-of list for 2014. Devilskein & Dearlove is a modern retelling of The Secret Garden, set in an apartment block on the famous Long Street in Cape Town. Erin Dearlove uses a snooty, surly persona to mask the unbearable grief of losing her family in a horrific home invasion that she won’t admit happened (she tells people they were eaten by a crocodile in their designer mansion). Feeling somewhat monstrous herself, she tries to befriend Mr Devilskein, the demon living in no. 6616. His otherworldly apartment contains a multitude of realities – souls people have sold to the devil. Each soul is locked behind a door, and Devilskein is the keeper of the keys. He tolerates Erin only because he wants to steal her heart to replace his ailing one.

Besides falling in love with the quirky fantasy of this novel, I really appreciated how seriously it took the decisions of its young main character. She starts the novel as victim of something terrible she could never have controlled, but from then on her decisions have significant consequences, both for her and those close to her, whether she chooses wisely or makes terrible, terrible mistakes. It’s a lovely, whimsical novel, but doesn’t shy away from darker content, which is something I appreciate in YA. 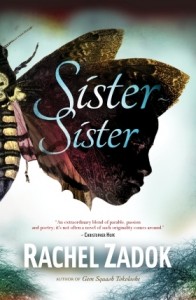 I just finished this one, and I’m trying to wrap my head around it. The beautiful cover belies an unexpectedly dark story set in a future Johannesburg ravaged by climate change. It’s not postapocalyptic, although it often seems that way because it’s written from the POVs of a pair of homeless twins; the danger and suffering they face on the streets makes it seem like some unfamiliar, primitive world. However, it’s clear that more privileged lives are carrying on without them, as Thuli and Sindi watch electric cars driving down the highway at rush hour, or peer through the bars of locked gates around the safe homes they will never live in. It’s the kind of inequality that you’ll find depicted in any SA novel that seeks to offer a realistic portrayal of our society, whether it’s sff or not.

In Sister Sister, the imagery of sun-baked roads, lost souls and discarded things sets the stage for a tale that alternates between feeling fantastical and disturbingly real. The book deals with issues of belief, child abuse and HIV/AIDS – not something I’d normally jump to read, but Zadok handles it with creativity and grace.

I hope this list gives you a starting point, and if you like you can find reviews of them on my blog (except for Sister Sister, which is in progress). But it’s just a start. I considered adding Mary Watson’s The Cutting Room to this list and chose not to only because it’s not explicitly sff. There are other authors, not all of whom write about South Africa, who’d no doubt be on this list if I had more time to read – Cat Hellisen, Henrietta Rose-Innes, Andrew Salomon, Diane Awerbuck, Nerine Dorman, Dave-Brendon de Burgh, Liz de Jager, Melissa Delport… In the meantime I’ll try and do my bit to keep the list growing.

Lauren Smith is a blogger from Cape Town, South Africa. She reviews books in order to do something useful with that English lit degree, and voice her not-quite-humble opinions on all the books she reads.