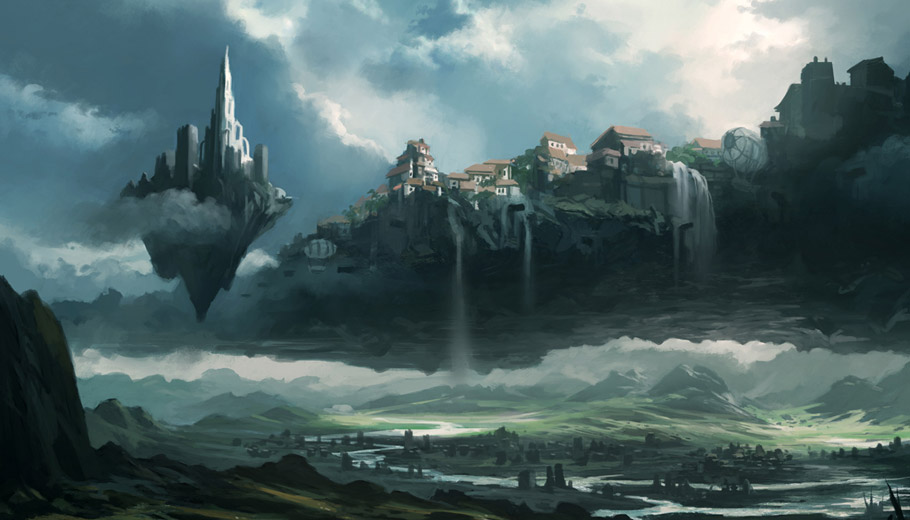 First, we’re going up… and (maybe) down, so pack your chutes. Aidan asked me to write a post about worldbuilding in the air — a somewhat non-traditional fantasy setting — because of a few stories I have in the wind. I set both the short story, “A Moment of Gravity, Circumscribed,”1 out this month in XIII: Stories of Transformation (Resurrection House, March 2015), and my upcoming novel Updraft above the clouds.

Second: Gravity’s a tough mistress. I hope you checked that chute before you packed it.

Third, there’s nothing “traditional” about today’s terra-firma fantasy landscape. A look at the recent offerings from Elizabeth Bear (Karen Memory, the Eternal Sky series, all from Tor), Katherine Addison (The Goblin Emperor, Tor 2014), and Ken Liu (The Grace of Kings, Saga, 2015) each offer vistas beyond the familiar hill and vale.

That said, when setting a story far above the ground, there are a number of extra worldbuilding issues to consider. These include natural versus man-made hazards, line of attack, line of supply, and necessity.

Setting a story in the air is a great opportunity to put your characters in jeopardy… and leave them there.

Doing so can be occasioned by a call of duty — as with Anne McCaffrey’s Dragonriders series (please don’t suck, movie, please), or as a piece of a larger setting — as in the floating islands of Arianus in the Death Gate series (Margaret Weis and Tracy Hickman, Spectra, 1990s). Oppositionally, the internal and external cultures of K.W. Jeter’s Farewell Horizontal (St. Martins, 1989) and Steven Gould’s short story “Peaches for Mad Molly,” have arrayed themselves on mega high-rises because there is seemingly nowhere else to go.

You might otherwise set your story in the air for reasons of culture and environment: Bellerophon’s estates in Firefly float above the waves for added security; Star Wars’ Cloud City does so because it’s stationed on a gas giant that would crush it at any lower elevation. The castle in Diana Wynne Jones’ Castle in the Sky floats because: Howl. (Ditto, Miyazaki’s version). Meantime, the floating population of Rajan Khanna’s Falling Sky (Pyr 2014) raises itself on airships to avoid the dangerous ferals down below.

Let’s say that you live above the wreckage of North American civi­lization. Let’s say that below you, on the ground, live a horde of deadly Ferals who could pass you the Bug with just a drop of bodily fluids. – Falling Sky, Rhajan Khanna

Height can mean safety or security. It can indicate or confer status. It offers the ability to see far iin some cases, and avoid having things dropped on you in others (unless your enemies somehow get above you). In cases like the Eyrie in George Martin’s A Song of Ice and Fire (Bantam/Voyager, forever and ever), it means that the only approach to your home is one you control.

Sky settings and their cousins the outcrop setting (viz. the Eyrie)  have other benefits. They offer philosophies and perspectives that we might otherwise find in fantasy landscapes. Italo Calvino’s sky cities are some of my favorites in Invisible Cities (Harcourt Brace, 1978) for just this reason. And while you might (read: will almost certainly) have to give up your horse and your heavy armor, you can gain wings and bridges, machines that override physics (Jeter’s main character has a motorcycle that runs verticals like highways), bird-people, angel-adjuncts, and dragons. Oh such glorious dragons.

So, too, do you trade the challenge of a river crossing or a plains encampment for problems with wind, weather, and gravity. In a setting where fall and fail are synonymous, these are no small problems. In the air, dumb luck or pure stupidity can kill your characters just as dead as guile and malice.

And in the air, line of attack and line of approach go beyond horizontal. Air Force cadets learn this early, as do video gamers. “The enemy’s gate is down,” is a useful rule beyond the setting of the battle room — in the air, an attack can come from above, below, or any angle. Similarly, battles take place in three dimensions. This means more authorial blocking is required, but it also means your characters must understand the rules of the road or they’re going to crash into each other.

How your airborne culture transports things is also key – do they carry valuables up? Grow food in place? Trade between ships?

How is perpetuity maintained in your sky culture? History is a heavy burden. What your sky-folk can store or carry impacts how high they can go or stay.

In an airborne culture, dangers and difficulties can come from any direction. But then again, so can your story.

“There are three hypotheses about the inhabitants of Baucis: that they hate the earth; that they respect it so much they avoid all contact; that they love it as it was before they existed and with spyglasses and telescopes aimed downward they never tire of examining it, leaf by leaf, stone by stone, ant by ant, contemplating with fascination their own absence.”  — Invisible Cities, Italo Calvino