Ever noticed how the computers in Star Wars are so unbelievably dumb? C3PO, a being of pure logic and electrons, needs therapy more than anyone else in the galaxy. R2-D2 doesn’t have a method of communication that is, you know, intelligible to its owners without a peripheral. The Millennium Falcon doesn’t even have autopilot. It’s no mystery why, of course. Star Wars is a product of its time: a time when a computer behaving like a human being was as far advanced as we could imagine.

You know what you don’t see a whole lot of, though? Text messages. Video games. Selfies. Dating sites. You know, the everyday stuff we have right now.

Technology we use has transformed how we relate to one another.

It’s undeniable that the technology we use — and particularly our communications technology — has fundamentally transformed how we relate to one another. And not just Western teens, either. Social media is widely acknowledged as a key factor in the Arab Spring movement. Cell phone penetration in sub-Saharan Africa is at almost 80%. RenRen, a Chinese social network, has 214 million active users. The future is here, and if I may depart from William Gibson… it’s distributed more widely than most of us realize.

But you don’t often see that reflected in fiction, excepting when examining a technology and its ramifications are the whole point of the story. Technology is the background radiation informing everything we do and see and think. And somehow that background radiation hasn’t yet penetrated into our media, much less caused a genomic shift in the stories we tell. It’s almost like we can’t quite trace the cascade of changes from now into the distant future. Spaceships or selfies, pick one.

This is true to such an extent that William Gibson’s Spook Country is categorized as speculative fiction. This is a book that, aside from a more-or-less irrelevant maguffin, uses exclusively technology that existed at the time of writing — Twitter and flying drones and locative augmented reality art. Even now, some eight years after publication, that book feels impossibly fresh and modern. You don’t see many books like it that wind the many threads of the present into a single work.

Future shock, right? The present is so strange that we don’t quite live there yet, and we for sure don’t write stories there.

So our characters don’t casually take selfies, they don’t play games, they don’t look at cat pictures. (Again, unless the story is about the technology — the game in Ender’s Game, for example. Or The Circle.) Which is missing a beat, and an important one, if you ask me. Whether a character checks email once a week or once every five minutes could be an important vector for characterization. You might have a very different perception of the person who posts a photo of their sushi order online compared to the one who posts pics of their naughty bits.

This is, I think, why a lot of older readers are drawn to young adult fiction lo these ten and fifteen years gone by. It’s because much adult fiction is being written for a world that hasn’t existed in twenty years, or fifty. There are no cell phones in that vanished world, no texting, no panopticon. But the young adults of today don’t respond to that world; they never in lived it. Before they were even born, these inventions had already warped the well-mapped territory of things-that-can-happen-in-a-story.

Have you ever notices how many authors kill the cell phone as often as possible, even assuming they exist in the first place? Broken, lost, dead battery, out of signal. All so we can get back to telling the kinds of stories we’re used to telling.

We’re relying on a narrative device hundreds of years old, where one party knows the Awful Truth but is unable to convey that information in a useful or timely way. Instant tension! It’s tried and true, and increasingly irrelevant to a modern-day reader.

But there’s an equally tense narrative device we’re not using much yet, where knowing the Awful Truth about an imminent danger doesn’t equate with preventing the horrible outcome. The pathos of that last phone call home from a plane that’s been hijacked, for example. The hopelessness of a 911 call when the ravening monster is already inside the house. The futility of a search that shows you exactly where the killer robot’s off switch is, but you don’t have the right proprietary screwdriver to access it. If we’ve learned anything in the last fifteen years, it’s that access to limitless knowledge and telepathy-like global communication doesn’t actually solve all our problems. If anything, it creates a lot of brand-new ones.

So what’s the reason for sticking to these old patterns? Is it that authors are hopelessly lost in the past? Are we all old fuddy-duddies? Too lazy to think up new tropes? A vast conspiracy for unknown but nefarious purpose?

Nah. Part of it is just plain logistics. Traditional publishing is a very, very slow game; that rare thing, an industry still running at the pace of the 19th century. It can take a year (even many years!) to write a book; a year or more to get an agent and a publishing deal; and even once you sell a book, your publication date might not be for another two years after that. And this explains why the vibrant world of short fiction includes new technology in the background far more often — because it’s more likely to be written in the same year in which it’s published.

An example: as I write this, I’m about to finally release Revision, a book that I started writing in February 2009. In the year 2009, there were only 6 million registered Twitter users. There are 288 million active users now. The number of people in the US with smartphones has doubled, to 63%. Since 2009, the Nike FuelBand has come and gone.

In the year 2009, the iPad didn’t even exist yet. Now my kid has an iPad issued to her by the public school district, and she uses it for all of her homework. The world has changed that much in just a half dozen years. That much! 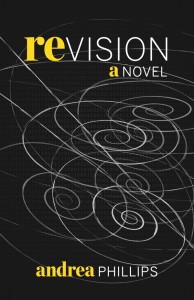 We live in a world where cars can drive themselves. Where performing a head transplant is a bad idea because it might cause insanity, not because it’s outright impossible. We’ve figured out invisibility, people. How in the world can our futures possibly keep up with how quickly the present is running away from us?

…Obviously we can’t. Science fiction has always been about the present, anyway, and it’s always commented on the political and social climate in which it was first written.

But I posit that the pace of change has become so rapid that science fiction isn’t even about the present anymore. It’s about three to five years ago, at best. It’s about the changes we’re struggling to come to grips with, because we haven’t even begun processing this year and its fresh batch of wonders yet. Maybe science fiction was never was about the present in the first place — maybe it was always a reaction to the recent past. But never before has there been a time when the recent past and the present have been so markedly different.

And being human, all we writers can do is try to keep up.

Andrea Phillips is an award-winning transmedia writer, game designer and author. She has worked on projects such as iOS fitness games Zombies, Run! and The Walk, The Maester's Path for HBO's Game of Thrones, human rights game America 2049, and the independent commercial ARG Perplex City. Her projects have variously won the Prix Jeunesse Interactivity Prize, a Broadband Digital award, a Canadian Screen Award, a BIMA, the Origins Vanguard Innovation Award, and others. Her book A Creator's Guide to Transmedia Storytelling is used to teach digital storytelling at universities around the world.