The City's Son by Tom Pollock 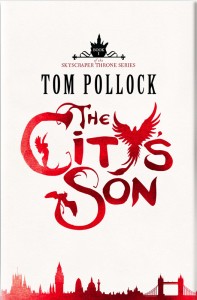 Tom Pollock writes beautiful prose. It’s the first thing I noticed about his debut novel, The City’s Son. So good in fact, that it buoys a straight forward young adult urban fantasy to new heights. It’s a rare novel of that ilk that’s able to hook me enough to give it a full run. I was pleased that not only did it engage me enough to finish the novel, but I found myself coming back to it time and again despite finding the plot just short of boring.

I admit that last sentence is about the biggest back handed compliment I’ve ever given someone. Guilty as charged, however, it’s not that simple. Allow me to explain.

A war between London’s deep history and her ruthlessly modern future.

Beth is a trouble maker, daughter of a Hackney widower with a penchant for artistic tagging, and she’s pulling her best friend Pen Khan down with her. After a rough encounter with corrupt school administrators, Beth runs away from her endlessly grieving father. In London’s back alleys, she sees something she should never have seen. Caught up in the divine forces on which the city is built, she finds herself in a war between London’s deep history and her ruthlessly modern future.

The architecture grew darker, stranger: a heavily graffiti’d old cinema building, its neon sign long-dead and its doors shuttered; an electricity sub-station half-hidden behind a cloud of razor-wire, and everywhere, the cranes massed on the skyline like cruel sentinels.

The City’s Son is a love story, both in the traditional sense and otherwise. Beth is struggling through life. She’s a teenager who lacks direction. Her dad is checked out. She’s falling through the cracks. Her brilliance is unappreciated by anyone other than her best friend. Pollock guides the reader through her awakening to the world outside her own skull–her love for the people around her and their love for her. Not love as excretion as so often is the case in juvenile fiction (notice, I didn’t say young adult as adult fiction can often be more juvenile this regard than the younger variety), rather love as acceptance, both of herself and others. 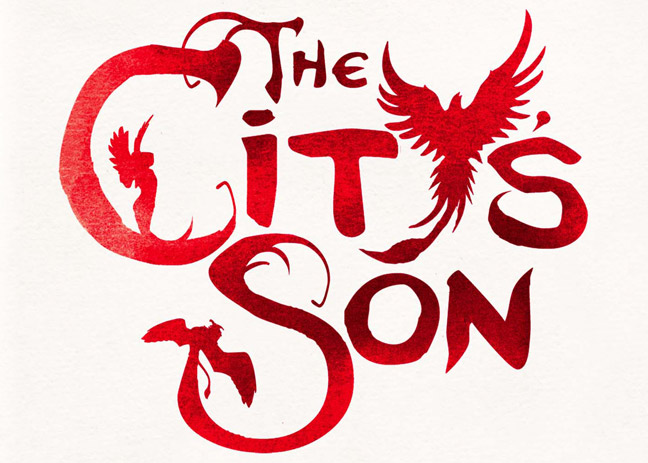 It’s also a story of Tom Pollock’s love affair with city of London. He isn’t a character himself, but it’s impossible to read The City’s Son and not feel the war he describes playing out on the streets he lives on. Times are changing everywhere, but in a place like London so rife with history it’s doubly difficult to witness its changing identity. Cobblestone streets become paved, and skyscrapers replace tumbledown neighborhoods along the Thames. Where once St. Paul’s Cathedral was the tallest structure in all of London the last few decades have drastically altered the London skyline. This modernization, for want of a better term, plays out in Pollock’s novel, represented by his human-like gods: Filius Viae, Prince of the Streets, and Reach, god of cranes and progress.

He often extends the metaphor even further, referencing Pen’s traditional Pakaistani family and the faceless legion squashed beneath the tread of progress:

We weave through the crowds on Church Street. I’m ostentatiously invisible: people take pains not to look at me, I suppose because I look so much like the figures huddled in sleeping-bags in doorways that they are also careful to ignore.

Pollock’s novel is so successful in this thematic exploration, vis-à-vis the symbolism and Beth’s emotional journey, that I’m afraid he often loses sight of his story. Not that The City’s Son is unclear or filled with holes, but it lacks veracity. Beth leaps too easily into the unknown, and her anthropomorphic counterpart Filius is too quick to accept her. Her father snaps out of his self-induced reverie without any repercussions, and Pen’s character, as important as it is to the novel, remains woefully underdeveloped. It all works, as it must for Pollock to accomplish his goal, but it works for exactly that reason, leaving his fingerprints all over his characters, as opposed to their fingerprints on his story. 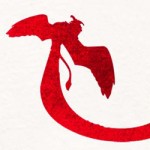 So this puts me where exactly? It’s a question I find hard to answer. As an adult reader, with a mature sense for what Pollock is communicating in the novel, I can’t describe The City’s Son in any other way than a phenomenal success. As a discussion on progress, and belief, and the changing natures of cultural history in the modern world, there’s a great deal of similarity between Pollock and Neil Gaiman in American Gods. Likewise, his use of language is not dissimilar from the estimable China Miéville who seems equally adept at working his prose to communicate substance between the lines.

Miéville is an interesting comparison point as his recent effort at writing young adult fiction, namely Railsea, fails to connect in the ways Pollock has in The City’s Son. Where Miéville often loses track of himself in his creations (and his self indulgent construction), Pollock seems to remember who he’s writing to and delivers the appropriate message with clarity.

The angel’s beautiful carved face watched. “I misjudged you, Miss Bradley,” he said softly. “Guilt is not your problem.”

Passages like above emphasize his desire to identify with the teenage psyche all while managing to likewise make a larger point that resonates like Big Ben chiming in the rain.

A tremendous piece of allegory, a dialogue on progress […] rewarding for readers of all ages.

When I finished The City’s Son, I had every intention of writing, at best, a lukewarm review. There I was criticizing a debut novel for uneven storytelling, an occurrence so common as to warrant comparison to flatulence in a Mel Brooks film. As I dug deeper into the novel, rereading passages and making connections, my eyes opened to appreciate what Pollock accomplished. He’s constructed a tremendous piece of allegory, a dialogue on progress, or at least the negative connotations of the word. Combined with his honest and revelatory approach to the teenage condition, it should be rewarding for readers of all ages.

Still, I wonder whether younger readers will find enough in The City’s Son to get passionate about when I felt the plot lacked conviction. That remains to be seen. In the meantime I’ll recognize Tom Pollock as a new writer more than capable of creating seminal works of art. If his first effort falls short of that, well, I’m not going to hold it against him.