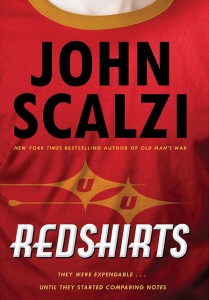 The main narrative in Redshirts is told through a tight third-person voice, following Ensign Dahl, who, in very un-Scalzi-like fashion, is plain. Yeah, he’s also likable, like all of Scalzi’s other protagonists, but lacks the acidic tongue and wit that usually marks Scalzi’s other stars. This plain personality is even discussed at one point, when two characters examine his place in the overall narrative. They eventually peg as the everyman protagonist — which, of course, he is. The rest of the cast, however, more than makes up for this plainness, and Scalzi’s trademark humour and mile-a-minute dialogue hums along as expected.

While leaving a first-person point-of-view, which Scalzi’s best novels usually feature, doesn’t hurt the enjoyable banter between his characters, removing most of the internal monologues associated with first-person storytelling, a trick that allows the plot to drive forward in parallel to exploring the personality of the protagonist, we’re instead left with a novel that feels an awful lot like a screenplay. There’s endless dialogue (really, the entire novel is like one, long conversation with commercial breaks), and any action that requires character agency is generally either glossed over (as blocking directions are in screenplays, from my understanding), or happen off-screen. All these names, with barely any description of their physical characteristics, which helps to cement a character in the mind of the reader, often left me feeling lost and I had trouble keeping track of who was who for the first half of the novel. They are, in every sense of the word, faceless characters. Of course,even this could all be taken as a furthering of Scalzi’s meta exploration and deconstruction of Science Fiction television from the late-60s forward, so, your mileage may vary.

All the wit, humour and biting dialogue that Scalzi is known for.

I criticized Scalzi’s previous novel, Fuzzy Nation (REVIEW), for ‘out-Scalzi-ing himself with each novel,’ and, unfortunately, I’m going to do the same here, though with the caveat that at least this time he’s wrapped the Scalziness in a narrative that tugs at the loose strings left hanging all over the Science Fiction genre. It’s cute and I enjoyed it more than any of Scalzi’s novels since The Ghost Brigade, but, ultimately, and despite the genre deconstructions, there just isn’t the depth necessary to really make it a remarkable novel. This is popcorn SF, which has its place, but, even just once, I’d like to see Scalzi really push himself to reach into an unfamiliar and challenging corner of his talent. My biggest frustration, I think, is that I expect that Scalzi is capable of real genre-pushing greatness.

In discussing Redshirts, it’s important to examine its unusual structure. 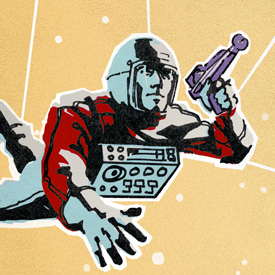 In discussing Redshirts, it’s important to examine its unusual structure. The main narrative, which follows a group of eponymous redshirts on the Intrepid, flagship of the Universal Union, is a long novella, ending three quarters of the way through the book. Following this are three ‘codas.’ These codas, told from the perspective of three tangential-but-plot-important characters, are short narratives that focus less on driving the plot forward (each of the three codas takes place after the main narrative has concluded), and instead on exploring the themes and concepts put forward by Scalzi and questioned by the crew of the Intrepid. These codas offer some depth and an emotional resonance that is missing from the main narrative, and are, especially the third and final coda, effective at wringing some genuine emotion and interesting ideas out of the sugar-soaked main narrative. It’s a little like watching an episode of The Partridge Family and then jumping into a cold, hard night at the bar with Danny Bonaduce. Effective, maybe, but ham-fisted, too.

Redshirts‘ biggest issue, however, is that it suffers, by its satirical nature, from all of the same narrative shortcomings as the television shows that Scalzi is riffing on. There’s too much convenience, and too little risk/consequence for the central group of characters. This is a strange problem to have in a novel that is full of characters whose sole purpose, directly confirmed by the narrative, is to die gruesomely, in curiously inventive ways, and often for no good reason. Despite this, there was little doubt that Dahl and his companions would remain at center stage, alive and well, through the end of the novel. A narrative needs its stars, afterall, and with the writer on your side, you’ve little to fear.

Redshirts is fast, fun and forgettable.

Like most of Scalzi’s novels, this review sounds a bit like a broken record. I’ve sang these praises before, and grumbled these complaints. Redshirts is fast, fun and forgettable. If this is your first go at Scalzi’s work, there’s a high chance that you’ll love it. It’s smart, sharp and self indulgent. If you’ve read Scalzi before, expect the same. It’s pretty, predictable and prosaic. If you’re looking for something that offers more depth than a good episode of Star Trek, look somewhere else.