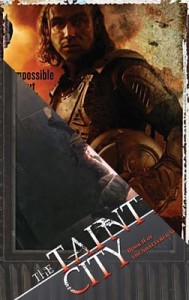 The Whitefire Crossing, Schafer’s debut novel, is an adventure novel about smuggler Dev, his human cargo Kiran, and a blood mage looking to escape his powerful mentor. A mountain climber herself, Schafer spends most of the novel in the Whitefire Mountains, her characters crossing the natural barrier between two nations with very different ideas about the proper use of magic. There’s a joy to the writing that comes from Schafer’s own love of the outdoors, but more than that there’s a general sense of wonder and excitement to the entire project. The Whitefire Crossing ends on an intriguing note, with Dev and Kiran now in the urban jungle fighting a political enemy somewhat divorced from their previous conflict.

Adventure and sense of wonder are about the last words I’d use to describe anything McCarthy writes. Germline was a Hunter S. Thompson and Michael Herr mash-up of embedded reporter Oscar Wendell on the front lines of a future war between the United States and Russia. Controversial usage of female germline super soldiers, who’ve been programming as cold killing machines, is the technological development around which much of the novel turns. His follow-up, Exogene, featured a germline unit named Catherine who shirks the genetic programming that would see her dead at 20 and pursues life, or a screwed up approximation of one.

Where McCarthy’s first novels are focused on the narrator and their personal conflicts, Oscar’s fear of life and Katherine’s fear of death, Chimera expands the scope to the wars’ effects on society. Told again in a self contained first person narration, Chimera begins back home with Stan Resnick trying to live a normal life and failing. While the struggle is a personal one, McCarthy parades others through Stan’s awareness, interacting with individuals from all levels of society. It provides the context and depth that I missed in Germline and Exogene, thus tying together a natural and satisfying conclusion to one of the more relevant pieces of science fiction in years (a subject Jared Shurin at Pornokitsch discusses at the end of his review).

Is The Tainted City relevant? Certainly not in the same way. As I mentioned above The Whitefire Crossing ends on a note promising an underdog struggle against a political juggernaut. I also had an irrational hope for more mountaineering that I found so engaging. I was disappointed then when Schafer chose to go another route, fast forwarding past those promised moments to the near future where Dev and Kiran are able to largely resume their fight from the first novel, which is more magical romp than understated drama.

Lacking relevancy to some larger discussion doesn’t in anyway diminish how much fun The Tainted City is to read. It’s compelling in fact, without succumbing to some of the tricks McCarthy uses to accomplish the same. For a modern fantasy novel, The Tainted City (and The Whitefire Crossing as well) has a conspicuous absence of visceral violence. People die, occasionally in less than pleasant ways, but there isn’t a ‘weapon’ to be seen. Juxtaposed to McCarthy’s work, the two might as well be night and day.

For a modern fantasy novel, The Tainted City (and The Whitefire Crossing as well) has a conspicuous absence of visceral violence. 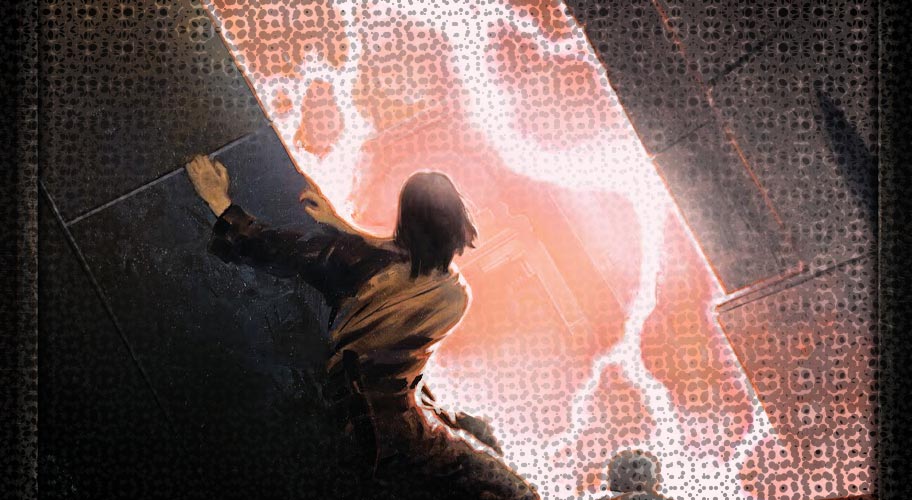 Stan symbolizes the impact of the war on the human condition, an anesthetized compartmentalized monster of a cautionary tale

Chimera, to an even greater degree than Germline or Exogene, potrays unrelenting graphic violence. It erodes compassion in the reader, embedding him inside the skull of Stan Resnick who is perhaps the only man in the world unchanged by the things he’s seen and done. It makes Chimera a difficult read, and something I would question ever being referred to as fun. But, McCarthy makes good use of it, using shock value to elicit emotional responses to the nature of war, or at least the nature of his war. More than any of his previous novels, the narrator is a cipher. Stan symbolizes the impact of the war on the human condition, an anesthetized compartmentalized monster of a cautionary tale who despite all his suffering would still choose war over the stifling reality of peace.

If I had to sum up in one word why Chimera and The Tainted City succeed it would be ‘conviction.’

I can’t say anything like that about The Tainted City. Schafer’s books aren’t wired that way. And yet, it’s a highly successful piece of fiction in the same way that McCarthy’s is. Chimera is built around Stan. It is all Stan. His thoughts, his feelings, his hate. McCarthy gets so deep inside his head that there is no where else to go. Despite Stan’s loathsome qualities, McCarthy lets him take control of the story, going where it’s important for him to go and to do what his character demands. It reads authentic, as though Stan himself were writing his story. The Tainted City is just the same. For all its failures to go the directions I wished it to go, I never once doubted Dev and Kiran’s actions as anything but their own. Schafer doesn’t work her characters to fit her plot; she lets them go, to find the solutions for themselves. The result isn’t just a fun novel, but a composed and interesting one. If I had to sum up in one word why Chimera and The Tainted City succeed it would be ‘conviction.’ I am convinced that my readers will feel that too if they give McCarthy and Schafer a chance.