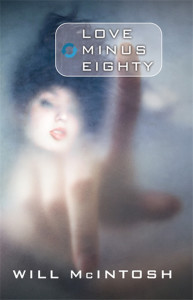 Based on Will McIntosh’s Hugo Award winning short story, ‘Bridesicles,’ Love Minus Eighty is set years in the future where cryogenics and life extension technology have reached the point that the only thing standing in the way of death is money. For the particularly beautiful and female, dying young means ending up in cryogenic dating farms where the creepiest rich men briefly resurrect them to determine how depraved they’ll be in exchange for another chance at life. It’s a horrific idea driven home by the character of Mira, who throughout the novel is killed and awakened untold times by curious ‘Johns’ (for lack of a better words). McIntosh calls these trapped souls bridesicles.

“. . . you’re at minus eighty degrees, thanks to your insurance, but full revival, especially when it involves extensive injury, is terribly costly. That’s where the dating services comes in–”

“I have a sister,” she interrupted. “Lynn.” Her jawed move so stiffly.

“Yes, a twin sister. Now, that would be interesting.” The man grinned, his eyebrows raised.

Into this horrifying milieu McIntosh gives us Rob, a materialistic boy-toy to a cyber-celebrity. After getting dumped during a broadcast, he accidentally kills a jogger who ends up a bridesicle (although only barely. . . Winter is a mere 8.6). Ridden with guilt he sells everything to visit her, seeking her forgiveness. There’s also Veronika, a dating coach who never seems to find time to date, and the aforementioned Mira, a gay woman accidentally placed in the heterosexual dating center near its inception. Rob, Veronika, Mira, and a host of other characters soon become caught up in finding a way to end the bridesicle program, while trying desperately to carve out some happiness for themselves.

Before looking at why Love Minus Eighty works so beautifully as a narrative, I want to talk a little bit about it as science fiction. More than that, I want to talk about why it’s significant science fiction. McIntosh extrapolates the online culture of today, projecting it forward to a future where skintight ‘systems’ worn on the body allow for unfettered access to cyberspace. So wired, anyone can allow others to observe them at all times, or some of the time, or none of the time, and anyone can ‘appear’ electronically anywhere that’s publicly accessible. Veronika (and her best friend Nathan) are online love coaches, customizing profiles to aid clients in attracting partners, as well as functional Cyrano de Bergeracs during dates. It’s a fascinating, and often disturbing, look at where things like Match.com, Facebook, eHarmony, and Tinder might take us. McIntosh seems to argue no where good.

Beyond the human interactions, Love Minus Eighty focuses on one of the oldest science fictional MacGuffins — cryonics. From Demolition Man (1993), to Captain America, to H.P. Lovecraft’s Cool Air, to Robert Heinlein’s The Door Into Summer, to Lois McMaster-Bujold’s Cryoburn, freezing humans at the moment of death to hedge against some future technology has been around since the beginning of speculative fiction. McIntosh doesn’t delve deeply into the technology, but presents one of the most likely scenarios for cryonics I’ve ever read. Namely, that freezing humans and then reviving them is likely to never be an economical solution. Storing bodies will always be a challenge, and society would struggle to handle a doubled life span for all of humanity. Instead, the cryonics of Love Minus Eighty are a luxury of the super-rich, or corporate entities who cannot allow their brightest minds to die. The end result is a future that seems entirely plausible when compared to today.

The result isn’t just an interesting science fictional discussion, but a larger discussion on the nature of love […] This is a novel everyone should read.

As a narrative, McIntosh weaves three distinct stories together. Cannibalized from his short story Bridesicles is Mira. She’s the symbol of the injustice in a system that exploits the death of beautiful women. While Mira is rarely the focus of the narrative, she’s the point around which all the other points of view coalesce. Rob, in his guilt over Winter’s death, must find ways to continue to visit her, working his fingers to the bone to pay the fee for a ‘date’ with a bridesicle. His arc is one of redemption, clawing back in to some semblance of grace after killing a woman in a drunken fugue. And Veronika who quests to find companionship and meaning in a world that’s anathema to physical contact. At first blush these three people have nothing in common. It leaves the reader to absorb something akin to three separate novellas. If that sounds off-putting, it shouldn’t as McIntosh never allows any of his points of view to be anything less that utterly compelling. He made me feel Rob’s guilt, Veronika’s effacing, and Mira’s despair.

How these disparate stories connect is where Love Minus Eighty succeeds, subtly bringing together the points of view into one coherent commentary on a possible future. The result isn’t just an interesting science fictional discussion, but a larger discussion on the nature of love, how it can make us better than we are, and how corrupted we can become in search of it. Will McIntosh, in three short years, has become one of the best writers in the field. His novels are what science fiction is all about, using the future to extrapolate about now. This is a novel everyone should read.