Sometimes, books sneak up on you. They’re like papery leopards lurking in the darkness, unseen and unheard, until – WHAM! Suddenly you’re pinned to the lounge beneath several hundred  pages’ worth of sleek, muscular prose gloved in velvet plotting and set off by a hypnotic, staring premise. This is what happened to me with Ancillary Justice, a book I bought – rather oddly, in hindsight – after seeing it given a rare double ten out of ten by The Book Smugglers, but without having actually read the review itself, meaning that I came to it with an expectation of quality, but lacking any notion of what it was actually about.

The version I bought was an ebook, which makes it impossible to measure the time between when I started reading and the first true Holy shit! moment in page numbers; nonetheless, it happened within five forward clicks on my Kindle. And as the contents of those five clicks can hardly be said to constitute spoiler territory, rather than try to describe the feeling of epiphany that came over me, I’m going to try and replicate it.

“Her name was Seivarden Vendaai […] I had thought her a thousand years dead, but she was, undeniably, here.”

The book opens with Breq – our as-yet nameless narrator – finding a body in the snow. “Frozen, bruised, and bloody as she was, I knew her,” Breq says. “Her name was Seivarden Vendaai, and a long time ago, she had been one of my officers, a young lieutenant, eventually promoted to her own command, another ship. I had thought her a thousand years dead, but she was, undeniably, here.”

This passage tells us three things: one, that Breq is (or was) in the military; two, that Breq isn’t conventionally human if she’s over a thousand years old; and three, that Seivarden is a woman. So far, so interesting, though I’ll admit to having given a little inner sigh at the use of the injured-woman-rescued-from-the-snow trope. Still, I kept reading.

Breq enters a tavern, looking for help for Seivarden, and encounters hostility from the locals. One patron she describes as follows:

She was probably male, to judge from the angular mazelike patterns quilting her shirt. I wasn’t entirely certain. It wouldn’t have mattered, if I had been in Radch space. Radchaai don’t care much about gender, and the language they speak – my own first language – doesn’t mark gender in any way. This language we were speaking now did, and I could make trouble for myself if I used the wrong forms. It didn’t help that cues meant to distinguish gender changed from place to place, sometimes radically, and rarely made much sense to me.

Listeners, my ears pricked up at this point.

I could find a way to keep avoiding referring to the barkeep’s gender. Or I could guess. It was, at worst, a fifty-fifty chance. ‘You’re very trusting,’ I said, guessing male, ‘to let such an indigent’ – I knew Seivarden was male, that one was easy – ‘run up such a debt.’

And there it was: the holy shit! moment. Because in just five clicks, Leckie had managed not only to pique my interest in the wider plot – If Breq isn’t human, what is she? How has Seivarden survived for more than a thousand years? Who are the Radchaai? – but done something totally unprecedented in my experience of fiction: made a deliberate decision to use feminine nouns and pronouns as a neutral, genderless default, even in instances where a character’s biological gender is known to be male, the better to reflect the narrator’s language and culture. Even more importantly, she’d done so in a way that was organic to the setting, explained it all very quickly, and given it yet more significance on account of the fact that Breq, being inhuman, cannot easily tell male from female. 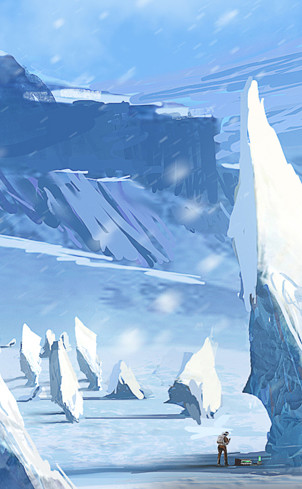 As a piece of subtle-yet-significant worldbuilding, it’s tidy, innovative and incredibly effective; but as a device for challenging the reader’s own assumptions about gender, it’s breathtakingly powerful. Only moments earlier, I’d been judging the book for having a wounded female character lying out in the snow; but with Seivarden revealed to be male, I was forced to re-evaluate the scene. That, all by itself, was a telling example of how our awareness of gender changes our perception of characters and their actions, but throughout the book, it’s a question we’re forced to consider time and again – as is the question of gender identification. For instance: we assume Breq’s body is female, because the same bar patron mentioned above mockingly refers to her as “a tough little girl”. As Breq herself observes, however, gender cues differ wildly from place to place, the ice planet is rural and isolated, and Breq is an outsider: so who’s to say that the patron has stated her gender corretly? Perhaps more saliently in Breq’s case, she was originally – and to an extent still is – the AI mind of a starship, able to control both male and female ancillary bodies. Does her consciousness, then, have a distinct gender, regardless of the body in which she finds herself? If she does, is that reflected by her current body? And if she doesn’t, is that because she’s an AI, or because she’s culturally Radchaai? And in either case, does it matter?

It’s a fascinating, eye-opening experience to find yourself wondering whether your perception of certain characters would change if you knew their gender for certain

These are the sort of questions Ancillary Justice asks. With every new character rendered female – by our reckoning, at least – until explicitly stated otherwise, it’s a fascinating, eye-opening experience to find yourself wondering whether your perception of certain characters would change if you knew their gender for certain. Which is, one suspects, precisely why Leckie so rarely gives us a definitive ruling. Instead, we’re left to decide for ourselves whether the romantic relationship between two characters is same- or opposite sex, or whether it’s even relevant to make that consideration; or to decide whether we can trust that the few, ostensibly familiar cues we’re given about gender – the presence of a beard, a fondness for cosmetics – mean what we think they mean, given the different cultures in play and Breq’s opening reminder that such signs aren’t fixed. Over and over again, Ancillary Justice invites us to sympathise with a wide range of characters – soldiers, doctors, civilians, tyrants, parents, children, bystanders – without ever being sure of their gender, and even now that I’ve sat down and thought about it, I honestly can’t think of another story that does likewise.

What is clear, however, is that the world of Ancillary Justice is populated largely by POC, with no evident taboo – in Radchaai culture, at least – against homosexuality. Which means, given the gender ambiguity, that you could read the book as though every major character bar Seivarden and Anaander Mianaai was a queer WOC, and you wouldn’t be wrong. And all of this from so simple, so easy a change as making the feminine form a universal default.

I cannot find fault with Ancillary Justice, an accomplishment made all the more extraordinary by the fact that it’s Leckie’s debut novel.

But for all its thought-provoking explorations of gender, Ancillary Justice is also an amazing novel in other respects. Structurally, the plot never falters: chapters alternate between the narrator’s present life as Breq and her former existence as Justice of Toren, until eventually, the two timestreams dovetail into a tense, compelling finale. The idea of ancillaries bodies – enemy prisoners turned into AI-inhabited soldiers – is explored with skill and nuance, tying neatly into the novel’s wider themes of colonialism, empire, culture, morality and warfare. The characterisation is superb, and Leckie has a real skill for explaining complex concepts in a concise, natural manner that never comes close to infodumping. The back-and-forward plotting keeps the pace tense without being rushed – both past and present events are intriguing enough that I constantly wanted to push on and see what happened next, with the chapter length perfectly structured to lull an eager reader into the sort of “just one more chapter” mindset that invariably leads to finishing the book at 3am and wondering where the time went. The action scenes are well-blocked and exciting, the mystery component genuinely intriguing, and the politics spot-on.

In short, I cannot find fault with Ancillary Justice, an accomplishment made all the more extraordinary by the fact that it’s Leckie’s debut novel. This is a book to watch out for, and if it doesn’t garner the author a Hugo nomination, I’ll be very much surprised.