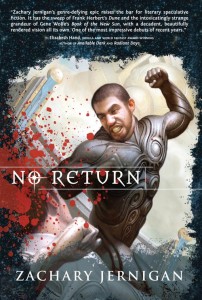 On the planet Jeroun, God (or Adrash if you prefer) is a vindictive son of a bitch watching from the heavens and occasionally hurtling metal meteors to the earth to punish his flock. Among the human population two ‘churches’ have emerged, the white and black suits, who oppose one another on the basis of whether God exists. One half of the plot leads up to a fighting tournament between these two factions, who have become accustomed to justifying the strength of their argument through strength of arms. This portion of No Return features Vedas, one of the black suits’ best bets to win the tournament. He travels across the countryside, joined by a female pit fighter, Churls, and an artificial man, Berun, who are heading to a secular companion tournament. 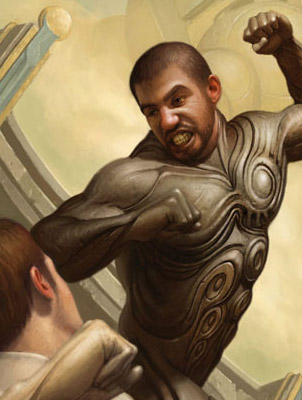 A fascinating storyline between the trio as they traverse across dangerous territory.

There’s a fascinating storyline between the trio as they traverse across dangerous territory. Namely, that all three of them are trying to find part of the human experience. Vedas, who’s lived within an airtight suit for his entire adult life, has no idea what it’s like to have contact with another human. Churls has become inured to human contact, her nerves deadened from a hard life among hard people. Based on that description the conflict between the two becomes apparent as an attraction develops between them. Berun, watching from the sidelines, yearns for what they have the opportunity to have, someone like them to bond and connect with and they refuse to take it. As the novel progresses the most human of the trio is the one most lacking the physical traits, a reminder perhaps that outward appearances bely what’s beneath. It’s an incredibly well executed juxtaposition and the absolute highlight of the novel.

Meanwhile, on the other side of the dual tracked narrative, Ebn and Pol of the Royal Outbound Mages are working at cross purposes to appease God. The pair are of a strange inhuman race, have strange sexual interactions, and act on strange agendas. Did I mention they’re strange? Oftentimes fantasists create alternative races, but provide them with anthropomorphic motivations and tendencies. They feel human in every way except the descriptions of their appearance. Jernigan manages to create something with Ebn and Pol that feels truly foreign. Manufacturing that feeling comes at a price though, and both characters are difficult to identify or engage with beyond a surface interest. In some ways I found these chapters simultaneously the most impressive part of No Return and the weakest.

Jernigan presents these narratives with an interesting and extremely effective structure. The divergent story lines alternate in a 3/2 fashion. The traveling trio get three chapters in a row, one from each of their points of view, followed by two chapters of the outbound mages. Containing five points of view in a 100,000 word novel should be a challenge, but Jernigan pulls it off with aplomb. Although he’s jumping between characters frequently, the reader maintains a connection with all the characters in that narrative, but through different perspectives. It reduces the jarring nature of point of view shifts and provides the reader with an expectation for what the next chapter might hold.

No Return asks the kinds of questions speculative fiction should ask, and provides the kinds of answers that literary fiction thinks it owns.

With all that in mind, I cannot absolve Jernigan of the novel’s finale. Fast paced and gripping right to the end, the denouement is left on the tip of the authorial tongue, as though No Return had to have the sequel genre fans seem to expect. It turns what could easily have been a self-contained, and brilliant, standalone novel, into something less so.

Flawed-but-less-than-great is still very good. No Return asks the kinds of questions speculative fiction should ask, and provides the kinds of answers that literary fiction thinks it owns. Not to mention the occasional twisted sex scenes that erotica would happily claim. Although frustrated by the need to wait, I’ll do just that, in hopes that Zachary Jernigan finds in his heart to deliver on the promises made by an ambitious debut novel.