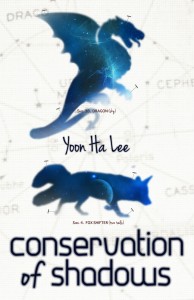 Up until recently, short stories, as a medium, were largely off my radar. Though I read them avidly and voraciously as a child, at some point during my mid to late teens, I just sort of… stopped. It wasn’t so much a conscious decision as a consequence of the fact that, for whatever reason – their length, presumably – short stories are frequently marketed to kids, but less so to teenagers (or at least, that used to be the case), and once they were no longer being thrust upon me, I didn’t seek them out. I kept writing them, of course, but not very well or often, because it’s extremely hard to develop any proficiency at an art form you aren’t actively exposed to. But ever since I bought a subscription to Clarkesworld for my Kindle and remembered, somewhat belatedly, how amazing good short stories are, I’ve been ravenous for them.

Conservation of Shadows is, to put it bluntly, breathtaking.

Enter Conservation of Shadows by Yoon Ha Lee – a collection I heard about via Aliette de Bodard, who wrote the introduction – which has well and truly reminded me that, if you’re not reading short stories, you’re missing out on something vital. With settings that range from the fantastic to the science fictional – and including plenty which blur the lines between them – Conservation of Shadows is, to put it bluntly, breathtaking. Lee writes with extraordinary power and beauty: her worldbuilding, which frequently draws its influences from Korean culture and history, is compulsively original and detailed, but without being overwhelming (except on the level of sheer professional envy). Thematically, her stories deal with empire, colonialism, warfare and its aftermath, and the many ways in which all these elements impact on people, history, language and culture.

‘It is not true that the dead cannot be folded. Square becomes kite becomes swan; history becomes rumor becomes song. Even the act of remembrance creases the truth.

What the paper-folding diagrams fail to mention is that each fold enacts itself upon the secret marrow of your ethics, the axioms of your thoughts.

Whether this is the most important thing the diagrams fail to mention is a matter of opinion.’
‘Ghostweight’ by Yoon Ha Lee

Each story is like an ideogram: a beautiful glyph whose self-contained complexities speak to myriad interlocking concepts.

The lyricism, profundity and density of ideas evident in this single passage are, as readers will quickly discover, typical of Lee’s work. Each story is like an ideogram: a beautiful glyph whose self-contained complexities speak to myriad interlocking concepts. Music, too, has an influence on the stories, often in conjunction with warfare – in Swanwatch, an exiled musician is tasked with composing scores to commemorate a needless cycle of ritualised military deaths, while in The Unstrung Zither, musicians are used by a space-age military to tune the magical elements whose manipulation underlies all their technology, including starships. The use of magic as a real, spiritual force both separate to and interweaving with science under the aegis of culture is something Lee does gorgeously, and to powerful effect. These are stories that grip you from all directions, pulling you into each new world with the inexorable force of true skill.

Which is why this is such a short review: I can’t do the stories justice. Trying to recap each one would be deeply inadequate; as clumsy and inefficient a persuasion as listing the many-layered attributes of an ideogram without ever actually drawing it. Instead, I’ve let Lee’s work speak for itself throughout this review, through a few of my favourite quotations. Trust me: this is a book you absolutely want to read. You won’t be the same once you’ve read it – and I mean that in the very best possible way.

‘Mrithaya is depicted as an eyeless woman of her people, small of stature, but with a shadow scarring the world. (Her people’s iconography has never been subtle.) She leans upon a crooked staff with words of poison scratched into it. In poetry, she is signified by smoke-wind and nausea, the sudden fall sideways into loss.’

‘A Vector Alphabet of Interstellar Travel’ by Yoon Ha Lee

‘Sir,’ Menowen said, ;I used to think heretics were just heretics, and death was just death. Why does it matter to you how they die?’…’Because war is about people,’ Jedao said. ‘Even when you’re killing them.’

‘The Battle of Candle Arc’ by Yoon Ha Lee

‘Underneath your armor there is skin, the organ on which your boundaries are written. You’ll know the instant it dissolves and opens your secrets to the air… Did I speak to you of skin? The walls are my skin, the gold-painted pillars my bones. Do what you will with them. You always did.’
‘Conservation of Shadows’ by Yoon Ha Lee

‘Traverse the spiraling maze and who do you find at the center? Imagine peeling the layers of yourself away. What’s left when you reach your hallowed heart, when the hollows admit no shadows but what you carry with you?’