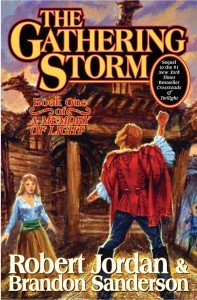 Adam, at the Wertzone, shares some news about the final volume in Robert Jordan’s Wheel of Time series, including the cover art:

The final Wheel of Time novel, A Memory of Light, has been split into at least two but possibly three volumes (i.e. if the recession gets worse it’ll be three). The first sub-volume, given the hilarious generic title The Gathering Storm, will be released in November 2009. But sub-volumes II and III (if it goes that far) will only follow at 12-month intervals. According to the website to break the news, Tor will be releasing the book in tradeback rather than hardcover, which sounds insane to me.

Hopefully expect an official announcement in the next day or two, although it is possible that furious fans will have burned down the entire Internet by then.

Interesting. Though I don’t think anyone’s surprised that it’ll end up being two volumes, three seems a bit of a stretch. I’d be curious to find out the justification behind releasing each volume in Trade Paperback instead of Hardcover.

The original news broke at The American Book Center Blog.

UPDATE – Adam posted some further clarification below in the comments:

According to Sanderson it’s not a hoax, but it’s not the full story either. Some things have been garbled in communication but he can’t say what until Tor issue the official press release.
I’m going to hazard it’s 2 books, hardcover as it should be, but maybe still separated by a year. The cover is also apparently a rough mock-up.

A few hours back, people started sharing links regarding a few places outside the US who have begun posting news related to A Memory of Light. I’m getting some emails about this, so I thought I’d go ahead and post something. Likely, this will all get overwritten soon, as soon as Tor and the Jordan estate release official reactions and/or announcements.

I can’t say much. Why? Well, it’s not my right. I’m loving being part of the Wheel of Time, but it is Harriet’s world, not mine. And so I feel it right to let her make any announcements at her pace. I don’t even feel right linking some of the websites making news about this, though you can find a thread about it on Dragonmount if you look.

A very small cover image has been floating around, and people want me to say if it’s a hoax or not. Well, to be honest, I haven’t yet seen the cover art for the book. Things have been so busy for me these last few months editing that I’ve let Harriet handle all of that. So I don’t know if the cover is the real one or not. It certainly looks like Mr. Sweet’s work, and it could be a scene from the book. But it looks rough, perhaps not the finished art. It’s too small to tell. And the lettering on it is suspect to me–it mentions this book being the sequel to Crossroads of Twilight, for instance, which is a flat-out error. I certainly didn’t approve that on cover copy, and I doubt Harriet did either. Most likely, this is a mock-up done internally that is being used as a placeholder. That’s just one of the several things that bothers me about this cover image.

A lot of people are wondering on the number of volumes this book will be. I’ll be honest, this is a big, big project. I stand by one promise to you, no matter what else happens. I will NOT artificially inflate the size of this book. It doesn’t matter to me how many volumes Tor decides to make it; the story is the same to me. One volume, as Robert Jordan planned it. Enormous.

If it is split into chunks, I will push Tor to release them as soon as is reasonably possible and I will push hard for an omnibus edition at the end.

Conclusion? Take everything with a grain of salt.