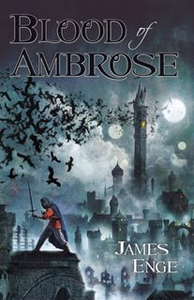 You know when you’re reading a novel, and you can pick out the author’s favourite word? Well, James Enge, the author of Blood of Ambrose, loves the word ‘crooked’ – it shows up on every second page, describes a good chunk of the characters in the novel and also happens to be the most accurate descriptor of the novel itself.

Blood of Ambrose is, if nothing else, a crooked novel and a crooked read.

Enge’s prose is nice – easily readable, lots of charm and irreverent wit – but it’s his storytelling and uneven characterization that fails. Enge made a name for himself as a writer of short fiction, and it shows big time in the episodic nature of Blood of Ambrose. Whereas a short story can successfully be written without much of a road plan, it’s much harder to accomplish with a full on novel, and the result here is a mess of plot points and characters that fail to coalesce into a story with any kind of satisfying flow. It never once felt like Enge had any sort of control over the plot, instead he just stumbles along, trying to find it as he goes.

Characters drop in and out of the novel, many without any purpose at all (Hope, a mysterious third sibling; the group of magicians from a mysterious land to the south (natch); Karn, a coward bodyguard of the king) and I couldn’t help but feel that these were nods to people who had read his short fiction, but pointless in the grand scheme of the novel. On top of this, the characters that did feature prominently, were uneven and failed to remain consistent in their personalities.

Enge uses heavy dialogue to move along a lot of the plot, which I’m usually a big fan of, but oftentimes it degenerates into mindless banter that, I assume, is supposed to make the reader smile, but instead just had me rolling my eyes. A few choice examples:

“I’ve seen that trick before. Pretends to kill itself, and when you’re not looking its sneaking off.” Treb drew a long knife and passed it through the corpse’s heart and neck. “Now it’s dead.” He deftly wrapped a cloth around the wounded neck to absorb the trickle of blood.

“Take the meat and go,” said Wyrth, slapping him on the shoulders. (Treb was not too tall, so he could just manage it.) Treb, grinning, hauled the body away.

“That man,” Morlock said, when Treb had gone, “has never before spoken in my presence.”

“And tonight you were half-naked, and so especially terrifying.”

“Wrong half for that,” Morlock observed mildly, pulling on a tunic.

Wyrth waved his hands. “Fine. Tonight everyone makes game of Wyrth. Just so I’m forewarned And forewarned is foreskinned – no, enough of that.”

Uhh… one of the main characters was just almost killed, and Enge throws in a foreskin joke for levity? Really?

“His name is nothing,” Morlock said. “I intend to kill him, not bind him. Look, Jordel,” he said, choking off the verbose vocate’s protests, “take a piece of string.”

“Why, I don’t happen to have any string at the moment,” Jordel cried.

“He means you to consider an imaginary piece of string,” Wyrth explained.

“You take the piece of string,” Morlock continued, “and you tie one end to your index finger and the other Baran’s index finger. Then, when you choose, you can move Baran’s finger.”

“Unless he resists, you know. He’s awfully strong.”

More obtuse banter, and this time I caught myself wondering if Enge’s editor (the usually sharp Lou Anders) didn’t fall asleep on the job. I might also point out that the novel is 390 pages long in trade paperback format, putting both of these pulled quotes in the final 1/4 of the novel, and only about 50 pages from the climax and denouement, which strikes me as an odd place to have pointless jabbering between characters.

The setting is vague, taking place mostly inside a castle (think Gormenghast by Mervyn Peake or the beginning of The Dragonbone Chair by Tad Williams) and the surrounding city. Beyond that, and some vague mentions to Britain, it was hard to get a sense of how all the various names thrown around of countries, kingdoms and other cities tied together.

Equally unsubstantiated were many of the plot points throughout the novel. One has to understand that Enge (with his history as a short story writer) set out to write an episodic novel, but that’s little excuse for having pages dedicated to plot strings that do little for the story as a whole. The flying horse early in the novel is fun, but the quest to get him back later in the novel leads nowhere and eats up precious pages. A similar lack of direction rears its head whenever Morlock’s mechanical spider shows up, which seems to serve little purpose other than as an interesting piece of imagery (and solves a vague problem near the end of the novel, which could have been circumvented in many other ways.)

Blood of Ambrose, wholly embracing its roots as an epic fantasy, has a big, bad, evil guy who wants to rule the empire. Okay, fine, I’ve enjoyed a lot of novels based on this premise, it’s a solid enough one. But both the villains here (it abruptly changes, midway through the novel) have little weight to them, mainly because their power and influence keeps on growing, but the reader’s given little reason as to how this keeps on happening, we’re just told that the city is all of a sudden full of zombies! How’d they get there? Why didn’t anyone stop them? Erm… who the hell knows?

This vague storytelling plagues the entire novel. We’re never quite sure who Morlock and Ambrosia really are, we’re simply told that they’re really old and powerful (despite having to spend most of the novel hiding from the badguys). It’s difficult to grasp what leads to the conflict in the novel, with little backstory established – the novel simply starts with the King’s big, bad ‘Protector’ switching sides and trying to take over the throne. Even Merlin shows up for no good reason, other than to make the reader ‘Oooh’ and ‘Awwww’. Through most of the novel, I couldn’t tell if Enge was attempting a satire of Epic Fantasy, or simply falling into all the traps that plague bad novels of the sub-genre.

I wanted to like Blood of Ambrose, I really did. But, beyond the initial impression (which was rather positive, due to the strength of his prose) the storytelling and characters just couldn’t grab me, and gradually I began to care less and less about what was going on. Morlock, and his apprentice Wyrth, are interesting characters, but probably better left to short fiction, which is where I expect Enge’s storytelling feels more natural.