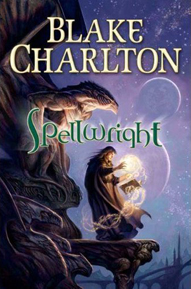 It’s obvious from the very early pages of Spellwright that Blake Charlton is a child of late-eighties and early-nineties Fantasy. It’s full of dastardly villains, righteous youths and hidden destinies. Like contemporaries Brandon Sanderson and Peter V. Brett, Charlton is doing his damnedest to bring back the type of fantasy where the good guys are good, and the bad guys are bad (barring a few genuinely surprising twists in the final pages) and the fate of the world’s at risk of being overrun by demon hordes.

And that’s not where the comparisons to Brett and Sanderson end. Both of those novelists are known for their intricate, imaginative magic systems, which are not only cool spectacles and a catalyst for visceral battle scenes, but also intimately woven into the plot and world of their stories, and Charlton’s work is no different. Spellwriting, which gives the caster the ability to ‘write’ complex magical formulas–much like a computer programming language–and manifest nearly anything they can think of (including cognizant, living spells called constructs and golems), is at the centre of Charlton’s story, with the main hook being that the protagonist, Nicodemus Weal (who was once thought to be a hero from prophecy) is a cacographer, a dyslexic Spellwright who can neither write his own spells nor come in contact with another’s spell without causing disastrous results.

The history of this character’s disability can be traced directly back to Charlton’s own struggles growing up with severe dyslexia, and this gives a real weight to Weal’s struggles, as one might consider the novel to have a semi-autobiographical nature, though surely Charlton never had to face the idea that only his disability was standing in the way of saving the world from certain doom. Spellwriting and Weal’s struggle to come to terms with his disability are certainly the meat of the story, given the generic overall plot of the novel (demons are bad, want to take over the world, et al.), and for the most part gives the reader a compelling reason to stick with the novel.

This all comes at a price, though. Unlike Sanderson’s and Brett’s magic systems, Spellwriting requires a heavy does of explanation to give the reader enough of a basic understanding of the system, and much of the early part of the novel is full of jargon and long conversations between various Spellwrights as they explain to each other concepts that they (but not the reader) should be more than familiar with. From page 62 of the Advance Reader Copy:

This was just as well; the boards weren’t really there. They were subtexts–prose crafted to elude even the trained eye. Most spellwrights struggled to glean subtexts if only because they believed their eyes. When encountering a door’s texture or image, a human mind rarely accepted any conclusion other than that the door existed. Only with knowledge of the author’s purpose could a reader hope to see past a subtext’s semblance to is true meaning.

Shannon, however, was free of vision’s tyranny. He stared into the dark before him and considered how Nora would have written the subtext. First she would have chosen a primary language. Numinous was the obvious choice–it possessed the ability to create illusions by bending light. To the spell’s central passages, Nora must have added a few Magnus paragraphs to provide a physical barrier and give texture to the illusion.

After choosing her language, Nora would have chosen particular sentence structures and diction to help her hide the spell

[…] Slowly the text’s central argument revealed itself, and Shannon gazed upon a door-shaped waterfall of golden prose interlaced with silver sentences.

The result is that Charlton’s magic system,with its almost mathematically logical underlying ruleset, does not weave itself into the story as naturally as that of Sanderson or Brett, and some effort must be made by the reader to understand the nuances of Spellwriting. Still, once the reader is comfortable, it shows its depth and the Charlton’s storytelling really begins to take advantage of Weal’s disability. We so often see the illiterate boy whisked off his farm and turned into a magical savant within pages, so it’s nice to see a young man (Weal is twenty-fiveish) who is raised in a breadbasket of magic, but struggles mightily with with his powers and the expectations thrust upon him by others. One might assume that, with the rules of the magic system laid out in Spellwright, the the two sequels will flow more organically as Charlton shifts focus from setting up the magic system and the world to telling the overarching story. 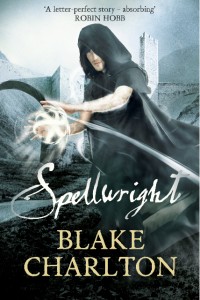 Speaking of which, world-building and setting are light in Spellwright, with most of the novel taking place in the confines of Starhaven a magical academy for Spellwrights, but with a more grown-up, academical air than Harry Potter‘s Hogwarts, and a shadowy, ancient history not unlike that established for Green Angel Tower in Tad Williams’ Memory, Sorrow and Thorn trilogy. Though ostensibly an Epic Fantasy from the outside, Spellwright‘s narrow setting, intimate plot and tight cast of characters reminds one of classic Sword & Sorcery novels, including James Enge‘s recent novel, Blood of Ambrose (minus the foreskin jokes, of course).

Spellwright moves along at a decent clip, thanks to short chapters and breezy dialogue. I’m generally a fan of short chapters, but there were a few instances where it seemed like Charlton artificially chopped a chapter off, in the middle of a scene, leading to an odd feeling of transition when the next chapter picks up, literally, a word away from where the previous one left off. The pace is also dampened now and then by infodumps, generally doled out through the aforementioned conversation between characters (again, often relaying information that should already be common knowledge to the two speaking). But, still, Charlton’s writing improves chapter on chapter, and by the final third I was having a damn hard time putting it down. The final chapter, just before the ominous epilogue, was particularly satisfying and sets up the next volume in interesting ways.

Charlton might not win over the Abercrombie/Martin/Lynch crowd, but there’s certainly something there for fans of you-know-who-to-root-for Fantasy, and those who grew up on Brooks, Williams and Feist will certainly find a lot to like about Spellwright. Though not perfect, Charlton’s inventive debut is comfortable in its tropes, but also willing to turn convention on its head and remind us of that sense of wonder than drew us to Fantasy in the first place.