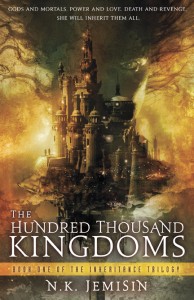 Hype. A powerful tool in the publishing industry. It’s an impressive achievement when a yet-to-be-published author can create and maintain buzz about their debut novel, with readers going gaga over something that hasn’t even hit store shelves. It’s exciting for those readers, but dangerous as well. For every time an author lives up to that hype (Patrick Rothfuss) several others fail to take advantage, to prove they were worth it (Robert Newcomb, anyone?). As a reviewer, I try to separate myself from the hype, to choose my books based on what I find interesting, not what the publishers are pushing hardest. Sometimes, though, it’s unavoidable. The Hundred Thousand Kingdoms by N.K. Jemisin is one of those cases.

As with any highly-anticipated novel, The Hundred Thousand Kingdoms had predefined itself in my mind, based on nothing more than the blurb on the back of the book and the beautiful cover. Before it even arrived on my doorstep, it was a victim of preconceptions and expectations. I opened The Hundred Thousand Kingdoms expecting one book and found a very different beast within. Expectations are often dangerous, but in this case, the smashing of them was a very good thing indeed, for I expected a familiar story, only to find a wonderfully original one in its place.

Yeine Darr is heir to the throne of the Hundred Thousand Kingdoms. She is also an outcast. Until, that is, her mother dies under mysterious circumstances.

Summoned by her grandfather to the majestic city of Sky, Yeine finds herself thrust into a vicious power struggle for the throne. As she fights for her life, she comes ever closer to discovering the truth about her mother’s death and her family’s bloody history – as well as the unsettling truths within herself.

With the fate of the world hanging in the balance, Yeine will learn how perilous it can be when love and hate are bound inseparably together, for both mortals and gods alike.”

The synopsis above hints at a traditional novel – young, naive protagonist, whisked into adventure and intrigue, shouldered with the responsibility of saving the world and navigating the bloody politics of her land. Even the tittle, The Hundred Thousand Kingdoms suggests the novel is an expansive struggle of lands and kingdoms, typical of Epic Fantasy (or Secondary World Fantasy, take your pick of sub-genre). For a truer impression of the novel, one has to consider its history, or, more aptly, the history of its title.

Originally, the novel was titled The Sky-God’s Lover, a title much more accurate to the tone and plot of the novel. Jemisin’s novel is very much a character-driven narrative, delving deep into the politics and relationships between its small cast of characters, rather than the kingdom-encompassing politics that its published title may suggest. Now, there is some true politicking included, but only a handful of the ‘Hundred Thousand Kingdoms’ are involved, and the disputes are more a display of power and coercion in the bitter relationship between protagonist Yeine and antagonist Scimina. For a novel titled The Hundred Thousand Kingdoms there is little world building or world-ranging conflict. The true heart of The Hundred Thousand Kingdoms lies in Yeine’s relationship to the characters (human and god) around her, most importantly the fallen Sky God, Nahadoth. The Sky-God’s Lover hints at the complexity of this relationship as it winds through its labyrinthine twists and turns through the slim novel.

Many novels written in first person perspective are done so for stylistic reasons only. The Hundred Thousand Kingdoms embraces the that style and weaves a story that could only be told directly from Yeine’s mouth (or pen, I suppose). There is a subtle dichotomy between and Yeine-the-girl, whom the story is about, and Yeine-the-woman, who narrates the story. Jemisin often breaks the fourth wall, with Yeine-the-narrator gathering her thoughts, throwing doubt on her recollections of events or characters and leaving the constant feeling that much is left unsaid, that the truths of the story are between the words, just out of reach.

I am not as I once was. They have done this to me, broken me open and torn out my heart. I do not know who I am anymore.

I must try to remember.

My people tell stories of the night I was born. They say my mother crossed her legs in the middle of labor and fought with all her strength not to release me into the world. I was born anyhow, of course; nature cannot be denied. Yet it does not surprise me that she tried.

My mother was an heiress of the Arameri. There was a ball for the lesser nobility — the sort of thing that happens once a decade as a backhanded sop to their self-esteem. My father dared ask my mother to dance; she deigned to consent. I have often wondered what he said and did that night to make her fall in love with him so powerfully, for she eventually abdicated her position to be with him. It is the stuff of great tales, yes? Very romantic. In the tales, such a couple lives happily ever after. The tales do not say what happens when the most powerful family in the world is offended in the process.

But I forget myself. Who was I, again? Ah, yes.

My name is Yeine. In my people’s way I am Yeine dau she Kinneth tai wer Somem kanna Darre, which means that I am the daughter of Kinneth, and that my tribe within the Darre people is called Somem. Tribes mean little to us these days, though before the Gods’ War they were more important.

I am nineteen years old. I also am, or was, the chieftain of my people, called ennu. In the Arameri way, which is the way of the Amn race from whom they originated, I am the Baroness Yeine Darr.

One month after my mother died, I received a message from my grandfather, Dekarta Arameri, inviting me to visit the family seat. Because one does not refuse an invitation from the Arameri, I set forth. It took the better part of three months to travel from the High North continent to Senm, across the Repentance Sea. Despite Darr’s relative poverty, I traveled in style the whole way, first by palanquin and ocean vessel, and finally by chauffeured horse-coach. This was not my choice. The Darre warriors’ council, which rather desperately hoped that I might restore us to the Arameri’s good graces, thought that this extravagance would help. It is well known that Amn respect displays of wealth.

Thus arrayed, I arrived at my destination on the cusp of the winter solstice. And as the driver stopped the coach on a hill outside the city, ostensibly to water the horses but more likely because he was a local and liked to watch foreigners gawk, I got my first glimpse of the Hundred Thousand Kingdoms’ heart.

Those characters surrounding Yeine are a mixed bag. The gods Nahadoth and Sieh are tragic and compelling, the relationship between them and Yeine growing organically through the novel. In contrast, Scimina, who stands in as the antagonist for the novel (for lack of a better term) is shallow and cliched – mean for the meanness sake, never as intelligent as the reader is told she is, and lacking in depth or motivation beyond desiring to rule the kingdoms. Her brother Relad, the other contender to the throne alongside Scimina and Yeine, is even shallower – a drunkard who sees very little screen time and serves more as a plot device than a character. Jemisin chose to focus on the gods, who are admittedly more interesting than the humans, and so the politicking for the throne is less compelling than it could have been.

Magic is central to the story – from the subtle magic used to reconstruct a trashed bedroom, to the earth shattering magic of a mad god – but there is little in the way of rules to contain the magic, beyond deciding which higher-ranking noble outranks the other and can control the whims of the chained gods. It does anything needed, no questions asked. But, then, these are gods we’re talking about, so perhaps that’s fitting. Certainly the spectacle is there and Jemisin’s imagery of the magic is astute and often astounding.

Jemisin’s novel is tonally reminiscent of Daniel Abraham’s The Long Price Quartet, a quiet reflection on the important themes of love, prejudice, rule and family. Yeine explores and fights with these facets of relationship and shows remarkable growth through the story. The relationships can often be brash and heavy-handed, but, like any that develop quickly and in times of duress, they are realistically bold and whimsical. The Hundred Thousand Kingdoms is marketed as the first volume of a trilogy but stands entirely on its own, with all major plot strings tied up at the end, the premise of future volumes hinted at only in the final pages of the satisfying climax.

Oftentimes, hype can be a dangerous thing, but in the case of The Hundred Thousand Kingdoms, I fell for the trap – hook, line and sinker. In the end, the few shortcomings of the novel were easily overlooked as Jemisin took my expectations and tossed them away, giving me a novel I never knew I wanted, but ended up needing so badly. A confident debut, The Hundred Thousand Kingdoms promises of great things to come from this bright new voice in Fantasy fiction.