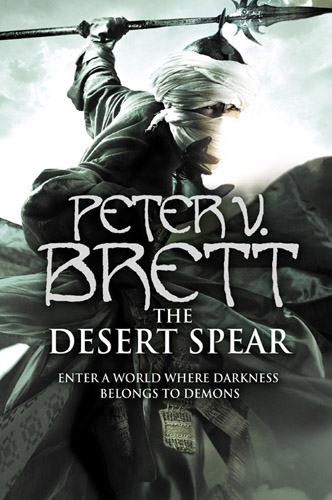 The Warded Man snuck its way onto my Best Novels of 2009 list. I was taken in by the strong characters, the easy pace and the imaginative magic system. The success of Brett’s debut was a surprise to everyone, but with that success comes a lot of pressure, placed squarely on the shoulders of The Desert Spear, Brett’s second novel and sequel to The Warded Man.

The opening chapters of The Desert Spear begin on the right foot, promising a novel that is everything The Warded Man was and more. Telling the life story of Jardir, a villanous character in The Warded Man, Brett pulls back the curtain on the absolutely brutal Krasian culture. A ruthless caste system, organized sodomy and rape, friends and family pit against each other in the name of honour, Krasia makes the lands predominantly featured in The Warded Man look tame in comparison. He takes Jardir, a character easy to hate, and pits him against a violent culture, creating empathy where I never thought I’d find any.

Easily the strongest part of the novel, Brett’s prose and language evolves, wrapping itself honestly about the storytelling and bringing a maturity to the novel that sets him in line with contemporaries like Joe Abercrombie and Richard Morgan. It’s after Jardir’s tale, when the tale catches up to the familiar tale of Leesha, Rojer and Arlen that things start to go south.

One of the strongest aspects of The Warded Man was the pacing. Following several characters from youth to childhood, the novel covered a vast amount of ground in the lives of the three protagonists. The Desert Spear is a very different novel (outside of Jardir’s early chapters). It covers only a matter of months (at most) and sacrifices the forward momentum of the plot for heavy politicking and development of relationships between the characters. The result is that, though The Desert Spear is 40 percent longer than The Warded Man, little happens over the course of the long novel. The characters evolve, but the overall plot of the series barely advances beyond where it was left at the end of the first volume. It’s eerily reminiscent of some of Robert Jordan’s later novels, which is an alarming thing to say about the second volume of a (reputedly) five book series. That’s not to say that Brett suffers from the same problems as Jordan (he’s not obtusely descriptive, for instance), but I often wondered, during the middle chapters of the novel, whether he might not have been able to balance plot and character more soundly, as he did in The Warded Man. The Desert Spear feels like it does little more than move characters and factions into place for the war to be inevitably fought in the third volume, The Daylight War. After finishing The Desert Spear, I moved onto Ursula K. LeGuin’s classic The Wizard of Earthsea, a novel that crams so much story and character into its slim page count that I’m often left curious how a novel as long as The Desert Spear can feel so insubstantial.

One issue I had with The Warded Man was that Brett’s prose didn’t always match up with the tone and subject matter of his story. For a novel involving rape, protagonists committing murder and incestuous families, the prose can be decidedly vanilla, more Terry Brooks than Richard Morgan. Now, there isn’t an inherent problem with breezy prose, but when it doesn’t match the story being told, it can draw one away from the experience.

Jardir’s chapters of The Desert Spear make promises of a maturing style, but when the action shifts back to Arlen and company, the prose regresses back to what it was in The Warded Man.

They slept on the sandstone floor of the barrack, thin blankets their only shield against the cold. Used to sharing the warmth of his mother and sisters, Jardir nestled against Abban’s warm bulk. In the distance, he heard the Horn of Sharak, and knew battle was being joined. It took a long time for him to drift off, dreaming of glory.

He woke with a start when another of the thin blankets was thrown over his face. He struggled hard, but the cloth was twisted behind his head and held tight. He heard Abban’s muffled scream next to him.

Blows began to rain down on him from all sides, kicks and punches blasting the breath from his body and rattling his brains. Jardir flailed his limbs wildly, but though he felt several of his blows connect, it did nothing to lessen the onslaught. Before long, he was hanging limply, supported wholly by the suffocating blanket.

When he thought he could endure no more and must surely die, never having gained paradise or glory, a familiar voice said, “Welcome to the Kaji’sharaj, rats,” the ‘s’ at the end whistling through Hasik’s missing tooth. The blankets were released, dropping them to the floor.

The other boys laughed and went back to their blankets as Jardir and Abban curled tight and wept in the darkness.

“That idiot!” Elona shrieked as the door slammed shut. Everyone else glanced at one another.

“Take as long back here as you like,” Smitt said, “I need to get out front.” He, Stefny, and Jona quickly filed out of the room, leaving Leesha alone with her fuming mother.

“He’ll be all right, Mum,” Leesha said. “There’s nowhere in all the world safer than traveling with Rojer and the Warded Man.”

“He’s a frail man!” Elona said. “He can’t ride with young men, and he’ll catch his death of cold! He’s never been the same after the flux took him last year.”

“Why, Mother,” Leesha said, surprised, “it sounds like you truly care.”

“Don’t take that tone with me,” Elona snapped. “Of course I care. He’s my husband. If you knew what it was be like to be married almost thirty years, you wouldn’t say such things.”

Leesha wanted to snap back, to shout out all the horrible things her mother had done to her father over the years, not the least of which being her repeated infidelity with Gared’s father, Steave, but the sincerity in her mother’s voice checked her.

Elona blinked. “I’m right? Did you just say I was right?”

Elona opened her arms. “Hug me now, child, while it lasts.” Leesha laughed and embraced her tightly.

One wouldn’t mistake the two passages as being written by different authours, but the little things add up and make the difference between a believably bleak world and a reminder that I was reading a fantasy novel. The Desert Spear often reads as though Terry Brooks decided he wanted to re-write Joe Abercrombie’s Best Served Cold

Still, the strength of The Warded Man was the characters, their relationships and their struggles with the brutal world they live in. In this regard, Brett continues to evolve those characters and it felt like finding old friends, once the story left Jardir behind and returned to Arlen, Leesha and Rojer.

One of the major issues with The Warded Man was Leesha’s response to a traumatic experience. The Warded Man seemed to dance around the issue, and had Leesha accepting it too readily, moving past it without enough reflection and emotional reprecussions. In The Desert Spear, Brett returns to this event, and much of Leesha’s character arc explores her continued battle with her demons and her journey to reconcile with the events and find again the confidence and willpower that made her so strong before.

Similarily, Arlen continues to struggle with the growing fame of The Warded Man. In The Warded Man we saw the creation of a legend, and in The Desert Spear we see that legend grow and expand beyond Arlen’s control. It creates a mythos that sets Arlen on a collision course with his old friend Jardir, and produces an interesting dichotomy as the two struggle with being the messiah for their respective cultures. In many ways, this relationship is the most integral and interesting of the novel, and it’s a pity that Brett spends so little time with Arlen.

Rojer is a take-it-or-leave-it kind of character. I enjoyed him in The Warded Man, but was ambivalent towards him in The Desert Spear. He mopes, complains that he’s not as badass as Arlen and whines about Leesha not returning his love. It’s like my sixteen-year-old self was inserted into a Fantasy world and given a magical lute.

The characters are all well defined, but I often found myself frustrated by Brett’s habit of telling the reader about a character’s qualities rather than letting the reader decide for themselves. It often manifests itself through dialogue, internal or external, when characters make obvious observations about themselves or whoever Brett wants to showcase. I don’t know how many times I was told how shrewd and observant Elona was, or how Inevera was so commanding that she made even the strongest warrior quake in their boots.

Elona nodded. “He’s just like his father; simple men, ruled by their passions.” She smiled wistfully, and Leesha knew she was thinking of Steave, her first love, who had died the year previous when flux took Cutter’s Hollow and the wards failed.

“The Marick I saw on the road wasn’t much different,” Leesha said.

“And you used Gatherer’s tricks to keep him off you,” Elona guessed, “instead of taking it as the perfect opportunity to have a romp with no one the wiser.” It was true enough; Leesha had secretly drugged Marick into impotence to prevent him from taking advantage of her on the road.

“Like you would have?” Leesha asked, unable to keep the bite from her tone.

“Yes,” Elona said, “and why not? Skirts lift up for a reason. Women have needs below, just as men. Don’t lie to yourself and pretend otherwise.”

“You know it,” Elona agreed, “and yet still you sew your petticoats shut, and think denying yourself somehow makes you heroic. How can you treat every body in the Hollow when you don’t understand the needs of your own?”

Leesha said nothing. Her mother had a most unsettling way of reading her thoughts.

Though this review has focussed on my frustrations with the novel, I must stress that this is the result of the high expectations I place on Brett and his series. The Warded Man was so good that I expected the world of The Desert Spear and was, ultimately, let down. I enjoyed The Desert Spear from beginning to end, but placed under a critical microscope. Like many middle-volumes, The Desert Spear does not have the luxury of a real beginning or ending, and the storyline meanders along and then ends, with few resolutions to the plot strings left hanging at the end of The Warded Man.

The Desert Spear is not the tale of humanity’s plight against the Demons that plague their land, as I had hoped, but rather it is about the early rumblings of a civil war between human nations that they can ill afford. One has to wonder, though, whether Brett wouldn’t have been better served getting right to the war, rather than spending an entire book moving the players into place and waving the threat in the face of readers. The Desert Spear offers an interesting look at the clash of cultures, but disappoints as a follow-up to The Warded Man. With the pieces now in place, it’s easy to hope that The Daylight War will get the overall momentum of the series back on course.