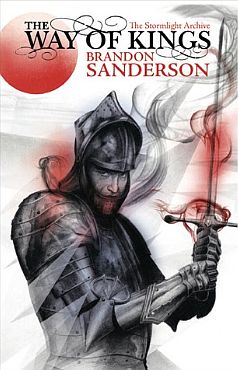 Hrm. It’s kinda like that old Brent Weeks’ cover (which I didn’t like), had a bastard love child with the UK Mistborn covers (which I loved). I’m not so sure it works so well as Sanderson’s previous Gollancz covers. The ghostly, ethereal feel worked well with Vin (who’s rather lithe, and pretty), but feels awkward with a knight-in-shining-author.

Presumably, this is an early draft of the cover, taken from the Gollancz catalog, so, like the Weeks’ cover, it could change, but, given its similarities to the Mistborn covers and the looming release date, I expect that’s a good idea of what the final version will look like. I’m rather more fond of the US Edition.