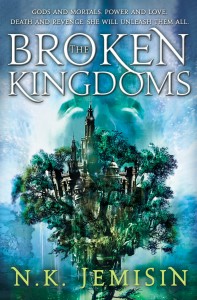 I like good news. I also like when cool people like N.K. Jemisin (INTERVIEW), author of the wonderful The Hundred Thousand Kingdoms (REVIEW), are at the centre of good news. So, it was to my delight to see that Jemisin has recently signed a new two-book deal with Orbit Books for the Dreamblood Duology due out in 2012.

An early synopsis of the first volume, Reaper:

In the city-state of Gujaareh, peace is the only law. Along its ancient stone streets, where time is marked by the river’s floods, there is no crime or violence. Within the city’s colored shadows, priests of the dream-goddess harvest the wild power of the sleeping mind as magic, using it to heal, soothe… and kill.

But when corruption blooms at the heart of Gujaareh’s great temple, Ehiru most famous of the city’s Gatherers — cannot defeat it alone. With the aid of his cold-eyed apprentice and a beautiful foreign spy, he must thwart a conspiracy whose roots lie in his own past. And to prevent the unleashing of deadly forbidden magic, he must somehow defeat a Gatherer’s most terrifying nemesis: the Reaper.

Those familiar with Jemisin’s short story “Narcomancer”, may recognize the setting:

I’ve been playing with the land of Gujaareh for several years now, in various forms. The setting was born from my longtime fascination with ancient Egypt, and the magic system from my longtime fascination with Freudian dream theory and Jung’s ideas about the collective unconscious. Some of you may remember my short story, The Narcomancer. … While these two new books are in the same setting, they don’t involve any of the short story’s characters, and focus on completely different subject matter. Just think of “The Narcomancer” as an unrelated side-story to the Dreamblood books.

The best news of all is that Orbit Books will be releasing the two volumes of the Dreamblood Duology in subsequent months (July and August, 2012), meaning we lucky readers will see five novels from Jemisin between 2010 and 2012. Not bad for a new writer.