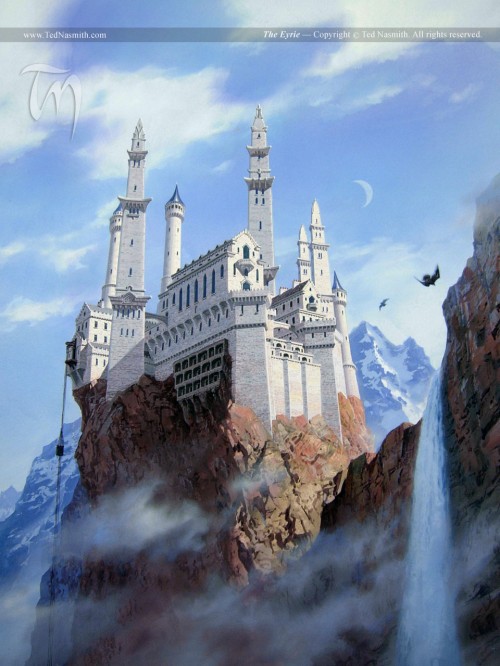 While reading A Dance with Dragons, the fifth volume in George R.R. Martin’s A Song of Ice and Fire, I was struck by a particular passage that really encapsulated the difference in Martin’s writing when comparing his earlier work to his later works. Not surprisingly, it’s a descriptive piece:

Deepwood’s mossy walls enclosed a wide, rounded hill with a flattened top, crowned by a cavernous longhall with a watchtower at one end, rising fifty feet above the hill. Beneath the hill was the bailey, with its stables, paddock, smithy, well, and sheepfold, defended by a deep ditch, a sloping earthen dike, and a palisade of logs. The outer defenses made an oval, following the contours of the land. There were two gates, each protected by a pair of square wooden towers, and wallwalks around the perimeter. On the south side of the castle, moss grew thick upon the palisade and crept halfway up the towers. To east and west were empty fields. Oats and barley had been growing there when [spoiler] took the castle, only to be crushed underfoot during her attack. A series of hard frosts had killed the crops they’d planted afterward, leaving only mud and ash and wilted, rotting stalks.

This is an exhaustingly detailed passage about Deepwood Motte, a strategically important castle, but one that has little to offer the series other than it’s place within the politics and military movement of Westeros’ various factions. And, frankly, it’s just not very interesting.

Now, compare that passage to this, the first description of the Eyrie, one of Martin’s most iconic and easily recognizable creations:

Catelyn raised her eyes, up and up and up. At first all she saw was stone and trees, the looming mass of the great mountain shrouded in night, as black as a starless sky. Then she noticed the glow of distant fires well above them; a tower keep, built upon the steep side of the mountain, its lights like orange eyes staring down from above. Above that was another, higher and more distant, and still higher a third, no more than a flickering spark in the sky. And finally, up where the falcons soared, a flash of white in the moonlight. Vertigo washed over her as she stared upward at the pale towers, so far above.

It’s a beautiful, evocative description of the amazing castle, but, more importantly, it asks the readers to fill in the gaps and engage the imagery. The opportunity for description is nearly endless, but Martin shows admirable restraint by relying on simile and poetic language, rather than a utilitarian description of the castle’s blueprint. To describe the Eyrie in detail similar to Deepwood Motte would have taken an excessive amount of space, but Martin was clever enough to avoid that. The description of Deepwood Motte could have been pared down significantly–to paint a haunting, desperate picture of a ruined, wooden castle–and the reader would have been no worse off for not knowing the shape of the outer defenses.

In my previous commentary on A Dance with Dragons, I lauded Martin for the growth of his prose and the enormous leap in quality it’s taken since the first volume of A Song of Ice and Fire was published. On a line-by-line or paragraph-by-paragraph level, this is absolutely certain; but now I worry that such weighty prose might be partly to blame for the slowed pace in the fourth and fifth (and, really, the third) volumes of the series. Because, really, plot-wise, does A Feast for Crows/A Dance with Dragons really have so much more plot/character development over A Storm of Swords that it needed two volumes? No, not really. So what’s accounting for the extra weight? Well, go re-read those two passages quoted above and see if you can’t come up with an answer.