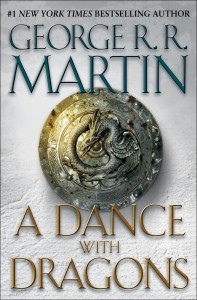 I’m now about 300 pages in. (I’m a slow reader, remember?) Bombs have been dropped (or eggs, mayhap?), ground has be re-tread (hello, Jon Snow!) and Tyrion has drank (drunk? drinked?) a lion’s share of wine. Besides one or two ‘twists’ (and one ‘fuck yeah!’ beheading), the pace of the narrative has been glacially slow, but enjoyable and engrossing all the same. The concise, labyrinthine storytelling of A Game of Thrones is now gone completely, replaced instead by a huge, sprawling behemoth of storytelling. Instead of having each chapter of the novel moving an overall novel-spanning narrative arc towards its conclusion (adding elements or perspectives only available to the viewpoint character), we now have three disparate stories running in parallel. Two of the major storylines, Dany and Tyrion, appear to be on a collision course (and, as the earlier novels would indicate, I expect that all the little connecting threads will appear retroactively once I look back on the completed novel), but Jon Snow’s chapters seem entirely self-contained (though, I suppose it could be argued that they were as such even as early as A Game of Thrones); and Bran Stark’s chapters, few-and-far-between (much to my chagrin) as they are, are even more disconnected from the rest of the narrative.

So, on a macro level, I take some issue with Martin’s pacing and narrative structure (it’s coming clear to me that he should’ve crammed all the characters into A Feast for Crows, rather than splitting the volumes by region) and lament that this relatively lax period of Westeros’s history has to be chronicled in such detail. On a micro level, however, Martin’s as strong as he’s ever been. Stronger, even.

To begin with, having just re-read the first three volumes of the series in the past few months, the growth of Martin’s prose over the past 15 years is remarkable. He started out with fairly economical (well, at least for Epic Fantasy and compared to some of his contemporaries/compatriots) prose that never did more than get the plot across to the reader; it was never intrusive, but never very pretty, either. Now, however, he’s found a new gear and is producing some wonderfully atmospheric and poetic imagery; his descriptive prose is now nearly the equal to his dialogue (which has always been his greatest strength, even above plotting) and it gives Westeros (and all the other lands) a new life. Where A Game of Thrones can be described as a very low-Fantasy novel, A Dance with Dragons throws so many strange, wondrous things at the reader that it’s clear we’re not in Westeros anymore.

In many ways, and this is sure to be a divisive opinion, I feel that the point-of-view chapters from tangential, sideliners (like Arianne Martell or Ser Arys Oakheart from A Feast for Crows) are some of the strongest, most compelling chapters in the novels. As much as I enjoy Tyrion’s wit or Jon’s emotional struggles, I’ve spent so much time in their heads that I’m now interested in seeing them portrayed through the eyes of outsiders. Martin’s so bloody good at handling perspective (and colouring his narrative with the preconceptions/prejudices of his narrators) that the major characters gain an enormous amount of depth through these secondary characters. I’m greatly looking forward to the second half of the novel when more of these chapters start cropping up.

Dany, and her slow, crumbling descent into becoming her father, has never been my favourite aspect of the series, but the emergence of a new competitor to her throne, twists things around and, though it doesn’t make me care about her any more than I ever have, my interest in the happenings on that side of the Narrow Sea are higher than they’ve ever been. I’d be lying, however, if I didn’t give Tyrion credit for also inspiring this excitement. Though his narrative meanders (literally), the dwarf’s chapters are the most enjoyable in the novel; he’s reeling from the shocking events at the end of A Storm of Swrods, so he’s not quite so proactive as we’ve come to expect, but his self-deprecating humour, shrewd intelligence and acidic wit are as strong as they’ve ever been. It’s a delight whenever his name is featured at the start of a chapter. As suggested earlier, Jon Snow’s chapters, though interesting enough (especially as they spread new light on Stannis and Melisandre), have, thus far, moved little beyond what we saw of Samwell Tarly’s small stint at The Wall in A Feast for Crows; thankfully, however, I see much potential for this storyline and Jon’s struggles to accept his role as leader and commander are much more interesting, believable and sympathetic than Dany’s similar issues.

In all, I’ve been greatly enjoying my time with A Dance with Dragons. It lacks that perfectly honed edge that first made me love the series when I picked up A Game of Thrones, but that’s to be expected when we’re dealing with what essentially breaks down to be the middle-book of a trilogy. For all the shortcomings of the somewhat turgid plot-movement, the wonderful characters and lovely prose are leaving me entirely satisfied with A Dance with Dragons, even after the big, long, mighty Wait™.