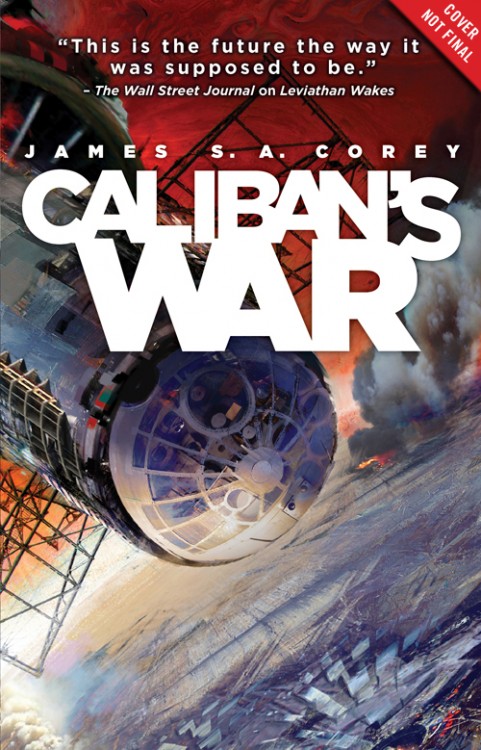 We are not alone.

The alien protomolecule is clear evidence of an intelligence beyond human reckoning. No one knows what exactly is being built on Venus, but whatever it is, it is vast, powerful, and terrifying.

When a creature of unknown origin and seemingly impossible physiology attacks soldiers on Ganymede, the fragile balance of power in the Solar System shatters. Now, the race is on to discover if the protomolecule has escaped Venus, or if someone is building an army of super-soldiers.

Jim Holden is the center of it all. In spite of everything, he’s still the best man for the job to find out what happened on Ganymede. Either way, the protomolecule is loose and Holden must find a way to stop it before war engulfs the entire system.

CALIBAN’S WAR is an action-packed space adventure following in the footsteps of the critically acclaimed Leviathan Wakes.

Yesterday we had the cover for Abraham’s Fantasy offering, The King’s Blood and today we’ve got his collaborative Science Fiction (alongside the awesomely fun Ty Franck), Caliban’s War, the sequel to Leviathan Wakes (which rules, REVIEW), the second volume of The Expanse trilogy.

I’ve been informed by Orbit that this is an early, unfinished look at the cover, so expect a nice layer of polish to be added to the final copy. I loved the cover for Leviathan Wakes and this one looks like it’ll be just as great (if not quite so impressionistic and soothing). Burning Coruscant certainly promises that the action will gain scope in the second volume. That said, I don’t think the typeface works so well with this title. My excitement for the novel continues to be sky-high.