This Wednesday, I had the opportunity to attend a book signing with one of my favourite new authors (and a good friend to this blog), Blake Charlton, the ultimately witty and charming author of Spellwright (REVIEW) and Spellbound. Little did I know that a few other familiar faces would also show up that evening.

Before the event, I ran into my good friend, Shawn Speakman, who was with his friend Todd Lockwood. At this point, my jaw nearly hit the floor. If you’ve followed this blog at all, you’ll know that I’m an enormous fan of Lockwood and his art (including that on the cover of Spellwright and Spellbound). Seriously, check it out, it’s awesome. Most importantly, though, Todd turned out to be a cool guy. Very nice, very down-to-Earth. We had some fun (and laughs) talking about recent trends in cover art.

Also on hand was Peter Orullian, the almost omnipresent author of The Unremembered and one of my personal literary heroes, Robin Hobb (known in ‘real life’ as Megan Lindholm), author of many, many amazing books. Peter was cool, ‘Robin’ was a sweetheart.

But, the night wasn’t about them, it was all in the name of Blake Charlton and his recently released novel, Spellbound. 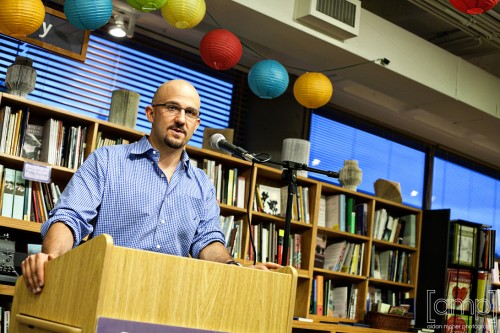 For those that don’t know, Blake was diagnosed as a young man with dyslexia, a learning disability that hinders comprehension of written language. His experiences battling and overcoming his disability form much of the basis behind the protagonist of his first novel, Spellwright, who suffers from a form of dyslexia as a wizard in a world where magic is fully dependant on spelling out complicated spells. Blake wonderfully wove both his experience with dyslexia and his experience as a med-student into his presentation. Instead of just reading a portion of his novel and then fielding questions (as many authors do at book signings), Blake effortlessly and charmingly weaved the reading of his novel with real-life anecdotes explaining why characters turned out the way they did, why he wrote a scene a certain way and how his experience with nameless young patients helped form the core of his novel. It was easily one of the most diverse and genuinely interesting book signings I’ve had the pleasure to attend (and I’ve been to more than a few), so kudos to Blake for that!

Thanks to Suvudu and Shawn Speakman (and Peter Orullian for doing some of the grunt work), there’s a video of the event, so you can see exactly what I’m talking about. I even make a guest appearance (as a cartoon-esque voiceover) by asking a question. Can you guess which one was me?

Author Event: Spellbound by Blake Charlton from Suvudu on Vimeo.

The signing afterwards was quick, dirty and satisfying: 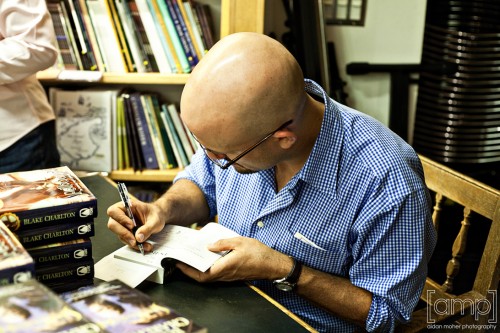 The bookstore even had the heavyweights doing some grunt work! Here’s (from left to right) Todd Lockwood, Robin Hobb and Peter Orullian stickering books to indicate that they’ve been signed! 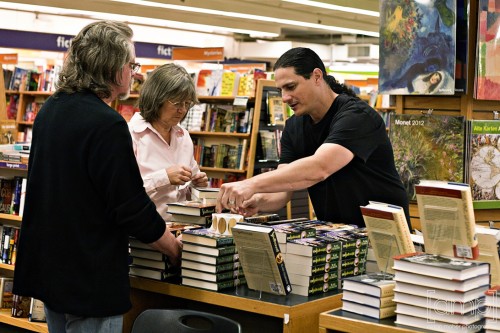 My absolute prize from the night, though, was my ARC of Spellbound, complete with a one-of-a-kind cover courtesy of the artist (and one of my long time favourites), Todd Lockwood: 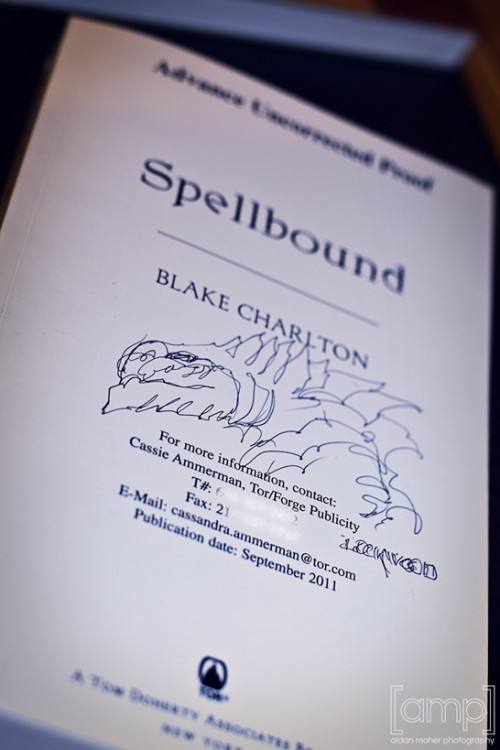 So, in all, in was certainly worth the drive down from chilly Canada. Though the signing was small, the crowd was enthusiastic (and, frankly, full of some fairly impressive names!) and it was nice to finally meet some folks I’ve been friends with (or admired, at the least) for years.

Have you ever met your favourite authors? Who, and how did they live up to the persona you’d created in your head?