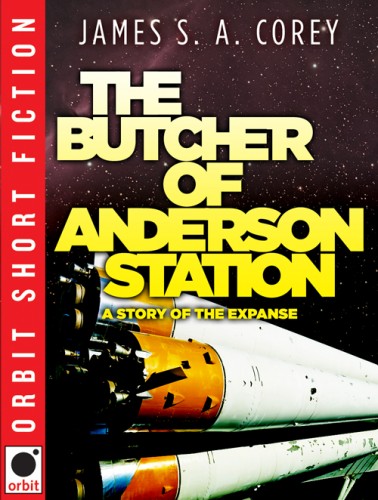 A new story set in the world of The Expanse. One day, Colonel Fred Johnson will be hailed as a hero to the system. One day, he will meet a desperate man in possession of a stolen spaceship and a deadly secret and extend a hand of friendship. But long before he became the leader of the Outer Planets Alliance, Fred Johnson had a very different name. The Butcher of Anderson Station.

This is his story.

Well this is just music to my ears. Leviathan Wakes is one of the best novels I’ve read this year (REVIEW). It’s sequel (COVER ART) is one of my most anticipated novels of 2012. And a short story, completely out of the blue, revolving around one of the first novel’s most interesting characters and events? Sign me right on up.

When Fred was a kid back on Earth, maybe five or six years old, he’d seen a weed growing in the darkness of his uncle’s cellar. The plant had been pale and thin but twice as tall as the ones out in the side yard, deformed by reaching for the sunlight. The man behind the bar looked just like that: too tall, too pale, too hungry for something he’d never had and never would. Belters were all like that.

The music in the bar mixed Punjabi rhythms with a high-voiced woman rapping in the polyglot mess of languages that made up Belter creole. The battered pachinko machine in the back rang and skittered. Hashish smoke sweetened the air. Fred leaned back on a bar stool meant for someone ten centimeters taller than he was and smiled gently.

“Is there a fucking problem?” he asked.

‘The Butcher of Anderson Station’ is 9,000 words long and available on all the major eBook platforms and costs as much as a bad gas station latte. Go buy it now. I already have.