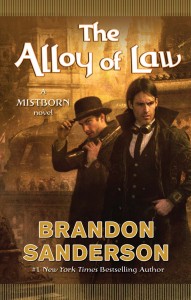 By my estimation, Brandon Sanderson’s Mistborn: The Final Empire is a modern classic of Fantasy literature. That’s not to say it’s perfect, just that it has clearly carved out a well deserved niche in the Fantasy conversation. It did so by taking chances with the tired tropes of the genre, subverting those tropes and character archetypes without feeling forced (as is the current soup du jour in Fantasy) and telling a memorable, vast story in one volume. It’s been over two years since I finished The Final Empire, and it’s stuck with me since, constantly asserting itself as a recent Fantasy novel against which I judge the rest of the genre’s new faces. Unfortunately, it’s sequels, The Well of Ascension and The Hero of Ages were never able to capture that magic.

Those sequels faltered by exchanging The Final Empire’s dense, tightly plotted narrative and dashing lead, with an over-long, wordy tale full of tangential storylines and character arcs, a meandering pace and a male lead that takes too long to to evolve from a nervous, self-righteous boy to a confident, believable saviour. Ultimately, each novel ends with some of the genre’s strongest storytelling, but the first three-to-four hundred pages are generally difficult. Had Sanderson stripped the two novels down and combined them into one, we’d have one of the finest Fantasy duologies of modern times; as it is, however, we are left with a trilogy full of wonderful highs, turgid lows and much wasted promise.

But now, finally, there’s a Mistborn sequel that equals the promise and quality of the first novel. Almost.

A self-defined post-modernist Fantasy writer, Sanderson continues to redefine the boundaries of the genre with The Alloy of Law, a new Mistborn novel set three hundred years after the conclusion of the original trilogy. It reads less like an attempted ‘subversion of genre tropes’™ and more like a cross between the original template for the Mistborn trilogy slammed headfirst into Butch Cassidy and the Sundance Kid, noir mystery and even a more contemporary twist by introducing forensic elements that wouldn’t be unfamiliar to fans of schlocky crime shows like CSI (though, obviously, in a setting with much lower tech). For the most part, it’s a combination that works and breaths fresh life into Sanderson’s series. He’s best known for his creativity and it shows, not only in the evolution of his magic system, but also in the structure, the plot and the influences he draws upon.

As with all of Sanderson’s other works, the characters are love-it-or-hate ‘em types. They’re too clever by half, always charming and attractive, and can often do no wrong, even when they make mistakes. I don’t always like the term ‘Mary-Sue,’ but Sanderson’s always been comfortable with it. It often becomes frustrating in his longer works (300,000 to 400,000 words, multiplied by the number of volumes in the series), but The Alloy of Law is short and breezy enough that the action doesn’t let up long enough to for the reader to realize that Sanderson’s novel is once again populated by infallible demi-gods (sometimes literally). That said, I really like the characters in The Alloy of Law, despite their flaws and almost without exception.

Foremost amongst those is Waxillium Ladrian, the protagonist of the novel. The prologue sets Wax up as a classic tragic hero, but Sanderson puts in enough work early on that his demons are easily recognized by the reader and, ultimately, believable. I went into the novel expecting to loathe Wax (because, well… that name), but walked away impressed by a character so fleshed out and likeable that he can confidently stand beside Kelsier, Spook and the rest of the great characters in the earlier Mistborn novels.

Then there’s Wayne. He’s the Robin to Wax’s Batman (but lacking the strangely submissive relationship); the Kif Kroker to Wax’s Zap Brannagan (though with less cleaning up after his partner); the Joey to Wax’s Chandler; the, well, Sundance Kid to Wax’s Butch Cassidy. Their relationship is built around a long-standing trust and constantly throughout the novel this faithfulness to one another is proven again and again as the two work together. They’re so perfectly opposite that they can’t help but work perfectly hand-in-hand. Sanderson has spoken publicly about the difficulty he sometimes has in handling Mat Cauthon in the Wheel of Time series, a character known fondly to fans of the series for his levity and sharp wit whenever in the face of danger. Wayne represents everything that Sanderson’s learned by taking Mat’s reins from the late Robert Jordan. He’s funny and in-your-face, but always lovable and convincingly capable. Too often, the wild, wacky sidekick stumbles his way through the storyline, often saved by the hero or averting ultimate destruction not through their knowledge or ability, but because they’ve stumbled across the solution (sometimes literally) — Mat Cauthon never falls into this trope, he’s never a class clown, and neither is Wayne, despite the humourous exterior.

Sanderson’s characters are improving, but one area that he’s already proven himself time-and-again is his labyrinthine-yet-logical magic systems and The Alloy of Law continues to cement Sanderson as the leader in the genre. With the rules already established in the original Mistborn trilogy, Sanderson’s free to experiment with the possibilties of mixing feruchemy and allomancy, two systems that were central to the original trilogy but barely allowed to interact. The result is one tremendous action scene after another, barely bogged down by much of the mechanical prose found in the earlier novels.

Taking a deep breath, Waxillium flared his steel and tapped his iron metalmind. Filling it made him lighter, but tapping it made him heavier—much heavier. He increased his weight a hundredfold. There was a proportional increase in the strength of his body, or so he’d guessed, as he didn’t crush himself with his own weight.

He raised his guns high over his head to keep them out of the radius, then Pushed outward from himself in a ring. He started carefully, gradually increasing its strength. When you Pushed, it was your weight against that of the object—in this case, the metal screws and bolts in the tables and chairs. They were swept away from him.

He became the epicenter of an expanding ring of force. Tables toppled, chairs scraped against the floor, and people screamed in surprise. Some were caught up in it, shoved away from him. Not so hard that they were hurt, he hoped, but it was better to suffer a few bruises than remain in the center of the room with what was coming.

The two magic systems have grown up and the result is and even more exhilarating roller coaster ride for readers. I don’t often say this (for good reason), but in the hands of the right director, The Alloy of Law, and the action sequences in particular, would translate beautifully to the movie screen. They’re so ripe with wonderful imagery and frenetic pacing.

In addition to the evolution in the magic systems, Sanderson’s done his due diligence to make the setting of the novel feel like 300-odd years have passed since readers last visited. Gone is the faux-renaissance world of rampant slavery, glittering dinner parties and swords, replaced instead by a world that feels just on the edge of the colonial west before it tips into an industrial revolution. Buildings scrape the skies in the enormous city of Elendel, but a train ride away are dusty colonial towns full of faux-cowboys, outlaws, six-shooters and, of course, damsels in distress. Early in the novel, Wax is displanted from this ‘wild west’ and forced to reform to the rules of the city, and Sanderson uses this to great effect as he parallels Wax’s transformation and evolution to that of the rapidly changing world.

It all ends in typical Sanderson-fashion: with a big, loud, twisty bang. He’s typically strong in the homestretch, and though The Alloy of Law doesn’t finish with as many jaw-dropping twists as The Hero of Ages (which, to be fair to Sanderson, would have been almost impossible to match, given the differences in length between the trilogy and this standalone), it’s still a satisfying bang. The core story is wrapped up nicely, but in true Fantasy fashion, there are enough dangling plot strings left that readers will be anxious for more stories of Wax and Wayne (hah! I just got that pun.) Also of note, and so titillating for Sanderson fans, is the emergence of a familiar face who appears right at the bitter end of the story, a face that throws the doors wide open for possibilities of future Mistborn tales.

The Alloy of Law is one of the finest Fantasy novels of the year. For fans of Sanderson, or neophytes just discovering his work, it’s an enjoyable adventure with wonderful characters, a unique, believable setting and all the hallmarks that make Sanderson one of the genre’s most exciting young writers. It was wonderful to return to the world of Scadrial and I just hope that Sanderson’s work on The Wheel of Time and The Stormlight Archives doesn’t slow down the publication of future Mistborn novels. The Alloy of Law is the best Mistborn novel since the first volume and comes with my highest recommendation.

FOR THOSE HUNTING THE HORN OF VALERE: Too easy. Come on!