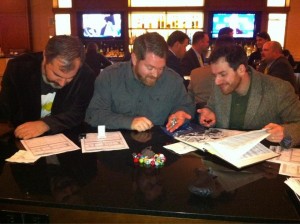 Jim Hines (Goblin Quest) goes with a half-orc ranger. D’ude is seventeen. We joke about single word Command or Hypnotism spells that would be appropriate to that age. (Inappropriate ones, of course.)

Myke Cole (Shadow Ops: Control Point) DMs, trying to get us outfitted in a reasonable amount of time. “Hey, guys, we’ll all just roll our characters in an hour the night before.” It takes 3 hours.

Oh yeah, now I’m remembering why none of my friends would play D&D with me.

Pat Rothfuss (The Kingkiller Chronicles) comes in late. He’s already claimed Wizard. Before we know it, the man insists he’ll use his extra gold to establish that he has a loyal manservant who always travels with him, and that he’ll pay him three times his wages. (Ah, the faithful manservant meatshield gambit. Nice, Rothfuss.)

We all notice livestock are cheap. Can we drive hundreds of livestock through the dungeon to set off every trap? We ask. Myke doesn’t look pleased.

Joe decides he’s going to be a flamboyant thief, Darque Shadeaux. We outfit him not with a dagger, but a dirque. He promises to speak constantly in an outrageous French accent. (In traveling to the Con, Joe has been up for about 22 hours at this point.)

After we finally finish getting setup, I decide I do want to be that assassin instead, despite the nerfing of a level 2 assassin. I’ll role play! I’ll be an artist! (An idea at the last minute that causes more work for everyone? I can see my editors just shaking their heads.)

We get started the next day. Somehow, I’m no longer half-orc; I’m now a half-elf. My meticulous backstory planning is destroyed. I’m also evil, which I understand, but I’m Chaotic Evil (i.e. friggin’ crazy evil). Every party in D&D has that guy that everyone hates. That guy who destroys party unity and makes it harder to finish the quest. Myke Cole has just made me That Guy. I realize that a half-elf isn’t going to be named Grrrthog, so I go with something like my big brother Glendrin–I dunno, maybe Glenfiddich or something?

Saladin Ahmed (Throne of the Crescent Moon) is co-DMing and doing most of the narrating and acting while Myke Cole is keep track of rolls and stats. He does a great job setting the stage, and an even better goblin voice. Ask him for it at his next signing.

Scott Lynch (The Gentleman Bastard Sequence) and Elizabeth Bear (Range of Ghosts) haven’t yet arrived, so Jay Lake (Endurance) and Yanni Kuznia (of Subterranean Press) step in for them. Jay/Scott is a gnome illusionist and Yanni/Elizabeth is a ranger.

The party heads out. Our DM’s have streamlined things to get us on the trail. We all barely know each other (except me and big bro Peat), and the party doesn’t know that I am an assassin. Muhaha! Now I get to act like a particularly inept fighter! Roleplaying as useless? I can do that.

The party encounters a cackling old madman. Peat says, “Gee, guys, seems like a trap.” We follow our scout Yanni anyway. The old man leads us into a trap. A cougar springs out of a tree. In the melee, Jim Hines’s D’ude rolls a natural 20 (critical hit) and cuts the cougar IN HALF. Abercrombie’s Darque Shadeaux (who he’s playing more like Face from the A-Team than a Frenchman) rolls a 1–and “accidentally” shoots me.

Using his orcish brilliance, D’ude decides he should attack the old man–with the half cougar. Yuck. Looks like a good idea. I throw the other half at that !$#%# who just shot me. I miss. D’ude hits. The old man is soon badly wounded. He falls to the ground, begging.

Pat suggests we interrogate the–

After ransacking the old man’s house–and Darque Shadeaux trying to hide the loot he found to keep it for himself–we finally choose a cave to go into. It’s dark, it’s scary, it’s stinky: it’s so classic D&D that I notice Peat wiping away a nostalgic tear. Soon, we’re fighting goblins for our lives. Of course.

In moments, Jim Hines’s D’ude is surrounded. D’ude nearly dies as Jim is struck with an OOC crisis: “Guys, I can’t attack them. They’re goblins!”

Luckily, with Peter Brett’s hugely muscular cleric acting as a tank, we obliterate the baddies. Rothfuss sizzles ’em with magic missiles. His valet Chauncy praises him to the skies. Peter heals up the party, and then we’re attacked again. Kobolds. There’s flying daggers and arrows and spells aplenty.

I flail about, still pretending to be a fighter. The chief kobold is knocked out. I kill him, loudly proclaiming my own excellence and helpfulness. Then… OGRE.

Abercrombie is still hiding in the background, lobbing arrows into the fray. Jay Lake gets nailed in the back–with an arrow. That damn Darque Shadeaux! (Actually, it was Yanni’s ranger having another catastrophic failure.) I fail to notice that Darque Shadeaux is not holding his bow. Indeed, he’s not much participating in the fight at all. He’s back there quietly looting the bodies we’ve just killed and is tucking away coppers for himself. Bastard!

Sprinting back toward Darque Shadeaux, I decide my moment has come. It is time to reveal my true nature, my fearsome assassination abilities. He’s got his back to me. He’s otherwise occupied. I’ve got all sorts of bonuses. I try to assassinate him. Muhaha!

I fail. I stagger into him. My sword pierces his cloak and is turned aside by his armor. We both fall.

“Um, oops! Hey, Dorque Shady, we’re fighting over here. You should come join us!” (Because clearly I’d poked him gently with my sword knowing it wouldn’t hurt him, right?) I turn around and run away to rejoin the fray.

Baddies are knocked out everywhere from a color spray, but there’s more, always more. D’ude is standing toe to toe with the ogre, and it looks grim. He’s almost dead when Jay Lake uses hypnotism. The spell can issue a one-word command, but not things like “suicide”. Jay is brilliant: “Vomit!”

The ogre pukes all over D’ude. They both stand there, looking equally baffled. I come in at the last second and make the killing blow.

I vaunt, loudly proclaiming my excellence and helpfulness. (Yes, I am That Guy.)

While Darque Shadeaux is looting yet again, and looking about suspiciously, (doubtless trying to pocket more than his fair share) I try to pick his pockets. Purely from the best of intentions, of course.

I fail! He catches my hand in his pocket.

He kisses me. I ask the DM if he has to roll to connect. He rolls to connect. And does not fail.

We both nod, and never speak of it again.

Our party divvies up the loot, and at Peat’s veiled suggestion (though he can’t suggest this as a cleric, he implies it), we make fortifications by skewering the dead monsters on spears we’ve found. Valet Chauncy praises Pat for his invaluable contributions without which we would all doubtless be dead, and the party decides that I will not be allowed to stand watch. (What? Why don’t they trust me?!) And we call it a day.

It was a great time, and I’ve missed a ton of the great acting and clever lines. Scott Lynch as gnome illusionist? Hilarious. Saladin screaming in kobold? Priceless. A hearty thank you to Peter Brett whose idea it was, to our DM’s Myke and Saladin who did a heckuva job in chaotic circumstances, and to our hosts Subterranean Press who got us a room to play in and furnished us with Mountain Dew so the whole nostalgia thing could be made complete.

And last, thanks to Aidan, for giving me this platform to share a bit about the game. If you ever get the chance to play with any one of these folks, take it. (Except for that Abercrombie. Swear that guy has Plot Armor to prevent anything bad from ever happening to him, just like his characters.)

Brent Weeks is the New York Times Bestselling author of The Black Prism and The Night Shadow Trilogy. You can contact Brent at brent(at)brentweeks(dot)com. Brent is pretty bad–okay, he’s flat out awful at replying to emails, probably because he spends 45 minutes on each one, and after answering three or four of the 700 in his inbox, he plugs his ears and bangs his head on the table and starts going na-na-na-na and visualizing a hamster on a jet-powered hamster wheel. But he does read all of his emails (the good ones, he’ll read two or three times, the little narcissist), and really enjoys hearing from you and does reply sometimes, so yes, Lloyd, I’m saying you have a chance.