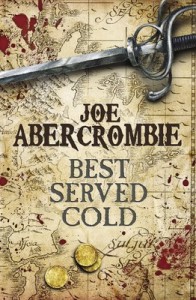 Beware, there are spoilers here for The First Law trilogy, specifically the ending of A Last Argument of Kings.

A Red Country is the next novel set in Joe Abercrombie’s popular fantasy world that readers first discovered in The First Law trilogy. With Abercrombie recently finishing a first draft of the novel, and some interesting news about the plot, I thought it would be a good time to go over the details of what we know about A Red Country.

First, we have this early synopsis from Abercrombie’s blog, from February 2012:

While the confirmed conclusion of Nicomo Cosca was pleasing (he’s one of Joe’s more convincing creations, if you ask me), the real discussion was centred around the few sentences describing Shy’s namless uncle: “She sets off in pursuit with only her cowardly old step-father Lamb for company. But it turns out he’s hiding a bloody past of his own. None bloodier.”

The repetition of the word “bloody” led many fans to believe that Shy’s uncle was none other than Logen Ninefingers, also known as “The Bloody Nine,” whose fate was left unclear at the end of The First Law trilogy. Since then, Abercrombie’s been asked of Logen’s fate in nearly ever interview he’s conducted, always replying with non-committal phrases and a cute wink.

This speculation was re-ignited and by a new synopsis, released in the Gollancz Fall catalog, revealed by Stomping on Yeti, that all but reveals the fate of Logen Ninefingers:

His name is Logen Ninefingers. And he’s back for one more adventure…

Joe Abercrombie is the most successful genre novelist of his generation, with a remarkable, cynical and powerful voice cutting through the clichés of the fantasy genre to create something compelling and exceptionally commercial. A Red Country is his most powerful novel yet.

Set thirteen years after the end of Last Argument of Kings, A Red Country finally looks to tell the story of Logen Ninefinger’s fate. In one way, I’m sort of sad to see Logen again and think that, if anyone, he deserved to pass his time quietly out-of-sight, though, with his history, and The Bloody Nine always lurking in the shadows, it’s no surprise that he couldn’t hide away through his twilight years. He was already aging and world-weary during The First Law trilogy, so I’m curious to see how he’s evolved and/or mellowed in the years since.

Fans have been clamouring for confirmation of Logen’s “death” for years, and Abercrombie has been determinedly tight-lipped about the situation, so why reveal that information through a small blurb in a catalog, rather than surprising fans with it in the text of the novel? Basically, these catalogs are created with the intention of building buzz within the bookseller/librarian/reviewer world. Logen is one of Abercrombie’s most popular characters and his inclusion in the novel is more likely to catch the attention of those influential people, spoilers be-damned, who ultimately determine the success of a novel. Of course, in this day and age, that information ends up here, on the blog, for regular fans of the series to read, spoilers, again, be-damned.

A earlier blog post from Abercrombie had an interesting tidbit about one of the POV characters in the novel:

I’ve made quite a significant change to the personality of one of my two central characters – or perhaps not a change but a clarification, a shift of emphasis and a refinement of style – and he seems to be working quite a bit better now. In essence, I’ve made him a bit more of a shit than he was before, which tends to be a fruitful direction for me to go in with characters on the whole. Who knew?

So, is that Cosca or Logen? Any guesses?

Abercrombie himself also has some interesting observations about the structure of the novel, which sees the POV characters reduced from a large handful to just two for the majority of the novel:

With Red Country I wanted to try something slightly different, and work with two central points of view plus an occasional third. By the time I’d written two parts that way, though, I was starting to think that was feeling a bit claustrophobic, and that even though I was aiming at a more stripped down, simple, focused style of story, I was missing a trick by not applying that extras approach to some sections of this book. So in the third, fourth, and fifth parts I did some major scenes in that style of rapid movement between minor players. Now I need to write a new sequence in that style to go in the second part, and rewrite a sequence that was previously from one point of view to be from many.

One of my major criticisms of Best Served Cold was that I felt Abercrombie was too comfortable with the tricks that made The First Law trilogy compelling. I said:

Best Served Cold is Abercrombie’s attempt to out-Abercrombie himself and everything is meaner and bloodier than last time; even the shades of grey have been left behind in favour of blood spattered black.

Now, I don’t expect the nihilism and general bloodiness to go away or lessen in A Red Country, but I am happy to see that Abercrombie is continuing to push himself in terms of story structure by eschewing the larger cast of POV characters for a tighter focus, allowing him to dig more deeply into these characters. It will be interesting to see how that affects my attachment to the characters and how I respond to the sections of the novel that pull back and feature a quick smattering of several points of view. It’s an ambitious attempt, which I admire.

For further hints at A Red Country and some great discussion with Joe himself, check out this episode of the Fantasy Faction podcast from February, 2012.