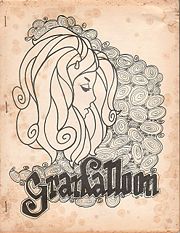 In the beginning, there were zines. Shortly after fish crawled out of the primordial ooze, and were greeted by First Fandom, zines started to appear. Science Fiction fandom wasn’t even invented when folks started doing the earliest things we’d call fanzines. Mostly, they were related to sports at first, and later to film stars and the like. Science Fiction fandom evolved and became the group most strongly associated with fanzines, largely because we popularized the name ‘fanzine’. Over the years, zines became the primary way that fans communicated when they couldn’t be in the same place physically. Over the years, this was slowly replaced, first by more frequent cons and ever-growing clubs, later by electronic bulletin boards, then USENET, then CompuServe, then AOL, and nowadays we’re up to blogs and such. Zines themselves evolved, first in the technology used to create them, later in the way they were presented. Most fanzines today are either done completely electronic or have a PDF version that echoes a printed version. And there are a few that have no electronic version at all. Not a lot, but there are some. We’ll get into that later.

I came into fanzines twice. My Dad loved ‘em. He had a fairly good little collection that he had for years. I used to color in them, but I learned how to read from issues of Granfalloon and Niekas. Over the years, I drifted out of fandom, only to return around 2004, finally starting my own zine, The Drink Tank, on January 31st, 2005. Over the last seven years, I’ve expanded the number of zines I’ve done, have got myself nominated a few times for the Hugo, managed to somehow win one of the things, and have made friends from around the world. That’s what zines have done for me.

To me, a zine has a feeling of completeness to it. It’s not a record of a moment; it’s a record of a period of collaboration. There are zines that are entirely the work of one person, but they’re getting rarer and rarer, it seems. In a way, those are the precursors of blogs, as I see it. Most zines are a mixture of writing and art, laid out in some form. The end result is an artifact; something with cohesion and a sense of togetherness. Many would say that Zines are a form of communication, and I’m not quite sure I agree. There are lots of ways to communicate, and I’d never really use a zine for that. To me, it’s a place for presentation, to show some of what you’re thinking, to show off the work of other folks. I’m lucky in that I’ve got a band of friends who are willing to send stuff to me to include in the zines.

Of course, I’m not the only one doing zines, and maybe that’s part of why people are having a hard time continuing to take zines seriously. There aren’t as many zinesters as there were in the late 1980s up to the mid-1990s. That was probably the peak as far as numbers go. The number of zines being produced on paper alone is pretty small, frequent Hugo nominee Banana Wings is the most prominent, but there are dozens that do both print and web editions. Some of the zines that do both include the exceptional Chunga by J. Randrew Byers, carl juarez and Andy Hooper, Steven H Silver’s wonderful Argentus, Guy H. Lillian’s excellent Challenger, and Journey Planet, where James Bacon and I team up with some great folks every few months. The combination form has become more and more popular as recent years have seen costs in printing and mailing increase greatly and this allows for a larger audience.

And yes, there are web-only fanzines. Since 2005, web-only fanzines have seen an explosion made possible by Bill Burn’s eFanzines.com. Many people have pointed to Arnie Katz’s Vegas Fandom Weekly for starting a flood of other web fanzines like The Drink Tank and Science Fiction San Francisco. An unexpected side effect of the existence of eFanzines is the return of a fair number of zines that hadn’t been published in decades. Pete Weston’s Relapse, Rob Jackson’s Inca, and Mike Maera’s A Meara For Observers all returned after long layoffs, and fans who hadn’t seen the light of day for years like John Neilsen-Hall and Eric Mayer came back to regularly give us zines and articles. Legendary 1960s fan and former WorldCon chair Earl Kemk’s eI recently ended a near-decade long run as one of the most impressive and far-ranging zines of all-time. More and more fanzine activity seems to be happening on or around the eFanzines crowd, including the current youth movement that seems to be taking hold. Yipe!, the Costumers Zine of Record, John Coxon’s Procrastinations, Dark Matter by Nalini Harris, and the darkly humorous Bullshit! from William Housel are all a part of a youngening that has been happening over the last few years.

For me, fanzines are about having a good time. I love layout, I love playing with art and text and I especially love finding strange connections. I also love that there’s absolutely nothing that I HAVE to do. There’s no requirements for what a fanzine has to be or do. I guess that’s what’s drawn me all these years, the freedom to work on what I want to do and not to have to worry about anything. Yeah, sometimes this leads to a “somewhat sloppy effect” (according to the Encyclopedia of Science Fiction), but it makes me happy to get to do it all the way I get to do it. It’s a lot of fun, and to me, if it’s not fun, why do it? That attitude would also explain the lack of grammar-checking in GarciaZines…

There is also a lovely community that gathers annually at a convention called CorFlu. It travels around the world, usually attracting between 50 and a hundred or so folks from several countries. A lot of folks participate in on-line mailing lists as well. It’s a community that can seem to be a bit closed off to folks who are new, but what’s interesting is that anyone can find themselves in the fold if they participate. It’s a good bunch of folks, a lot of fun to drink with!

There are challenges that face zines. There’s the general aging of a lot of Fanzine Fandom. While we’ve got a string of youth woven in at the moment, there’s a lot of folks in their 50s and 60s. There’s the ever-increasing number of folks who might have gone in for fanzines back in the day who are now finding themselves blogging or engaged in other kinds of writing. There’s the costs of printing for those who enjoy the feel of their works on paper. There’s the problem of getting folks to notice what you’re doing. There are so many other forms of writing out there, and the view that Fanzines are an old folks’ pastime has helped to keep younger fans from checking out what’s going on in the world of zines. For us web-based folks, there’s the problem of Letters of Comment. In the past, Letters of Comments, LoCs, were very much the norm with many zines consisting of long letter columns that would sometimes outpace the length of the rest of the contents all together. Many of electronic zines have trouble getting comments. These things happen.

There are many impressive zines out there today. The first ones that come to mind are some of those I’ve already mentioned, plus ones like Askance from Mr. John Purcell. You can’t go wrong with Trap Door from the legendary Robert Lichtman and a contributors list which reads like a list of the finest fannish writers in the world. Rich Coad’s Sense of Wonder Stories is one of the best of all the zines about both fandom and science fiction. If you like your discussion of science fiction deep, thoughtful and thorough, you must try and read Bruce Gillespie’s SF Commentary. It may well be the best writing about SF in the world today.

So, that’s Fanzines to me. I really believe that some of the finest writing in the world is happening in zines. It’s a world that you might wanna give a try. Start with eFanzines.com and look at what’s out there. The variety of stuff there is huge and you can’t go wrong… and if you do, well, there’s so much more that might just work for ya!

Christopher J Garcia is a writer, fanzine editor, filmmaker and historian from Santa Clara, California. You can read his zines at eFanzines.com, including the Hugo Award-winning The Drink Tank. He tweets as @johnnyeponymous.