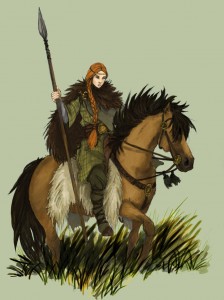 Since the beginning of April, Fantasy Cafe has been running a wonderful series of articles for Women in SF&F Month, with the hopes of exploring and celebrating the impact that women (as authors and characters) have had on our favourite genre. In addition to this, there is some discussion of the politics in the genre, gender equality and reviewer bias.

This particular subject is one I’ve felt pretty strongly about for a while now. A few years ago, I noticed that most of the fantasy and science fiction books being talked about on many blogs and forums were written by men and started questioning whether or not there was a significant number of women writing these genres. Since then, I’ve of course found that there are many female authors of fantasy and science fiction books and it’s become very important to me to make sure their work is recognized and discussed. Usually I just do this quietly by reading and reviewing a lot of books written by women, but after the topic came up again I decided I wanted to do more to showcase the many women who are writing and reviewing all kinds of different types of fantasy and science fiction. So I started asking around to see if there was any interest in being a part of this and have spent the past 2 or 3 weeks gathering volunteers and posts.

So, here are some of the articles from the series that have caught my eye:

Vanishing the Elephant by Stina Leicht:

Addressing touchy subjects with story is one of Science Fiction and Fantasy’s best traditions. Sure, not all Sci-fi and Fantasy does this. (Some novels are intended to be fluffy and they do have their place.) However, I feel the main thing that sets Sci-fi and Fantasy apart from other genres is its capacity to make the reader think, in addition to SFF readers’ willingness (perhaps even eagerness) to contemplate complex subjects.

Elizabeth Bear, author of Range of Ghosts, on how you can support women who write SF&F:

[T]he problem is not that women are not writing science fiction, or that science fiction by women is not being published. It’s that a certain segment of fandom doesn’t pay enough attention to notice.

As you might imagine, I find this intensely frustrating. It’s as if one or two women in each generation of writers are anointed to become token representatives of our gender in the general critical discourse, and the rest–somehow never get talked about very much.

The good news is, this is easy to fix.

For this guest post I spent a lot of time thinking about why I read so many speculative fiction stories by women, and I couldn’t come up with one reason. Part of it is that I am a woman and I want to read books with female characters and support female authors, part of it is my love of character driven stories along with great world building, part of it has to do with my being a romantic and gravitating to stories that are about relationships. I don’t think these are things unique to women writers, but they’re not uncommon. Even then, I still don’t think I’ve really explained why I read books by women because each book I pick up involves a decision that has a countless number of factors including mood, taste, proximity, hype, recommendation, and page number. In the end, I just read a lot of speculative fiction books by female authors.

The simple impressions I had of these two men at the beginning were certainly not enough to carry the story. There’s nothing more boring than a one-note character, someone who is defined by anger and can’t express anything else, or someone who is forever rebellious or forever snarky. Epic fantasy heroes and heroines get involved in larger than life difficulties, and it usually takes some combination of larger than life strength, endurance, and power, whether magical, spiritual, or intellectual to get them through. But that doesn’t mean every hero has to be godlike. Flawed, human people, with likes and dislikes, prejudices, vulnerabilities, doubts, fears, vices, and every other trait that we see in real life, make great protagonists.

Women in science fiction and fantasy – now there’s a loaded topic for you. At various places on-line you can read that women are (1) under-represented, (2) over-represented, (3) more prominent in fantasy than SF, (4) discriminated against by publishers, (5) preferred by publishers, and (6) almost anything else you care to name.

Historically, of course, SF was a male preserve. Look at the Tables of Contents of the early pulps, and there are vanishingly few female contributors. But the influx of women into SF in the late 1960’s and throughout the ‘70’s changed that. Not only were there more women writers, but there also came to be more female characters in SF besides the hero’s girlfriend or the scientist’s beautiful daughter.

But how many more?

In addition to these articles, there are many other great articles on Fantasy Cafe authored by some very smart, very knowledgable writers. I recommend that you check them out.

Also related to this is Strange Horizons’ recent statistical analysis of the gender balance at mainstream SFF review venues.

As last year, we set out to provide some context for the count by making a count of Locus books received listings, which is the best proxy I’m aware of for what gets published in the sf field. We counted the US and UK listings for March, June and September 2011. Overall, 47% of titles listed were written or edited by women, 53% by men; that’s closer to parity than last year. It also obscures a large difference between the US and the UK. In the US, last year, Locus received very nearly equal numbers of books written/edited by men and women. In contrast, only 1 in 3 books received from the UK was written or edited by a woman.

Unfortunately there’s not a lot of analysis or discussion of what the numbers mean, or the reasons behind the numbers, but it’s interesting and revealing nonetheless.

For further reading on the subject:

It’s a fascinating, often recursive conversation, and I hope you’ll spend some time this weekend, or in the upcoming weeks, reading through some of these great articles and thinking about the role that women (and, by extension, men) play in the wide Speculative Fiction genres.

Who are some of your favourite female writers and characters?